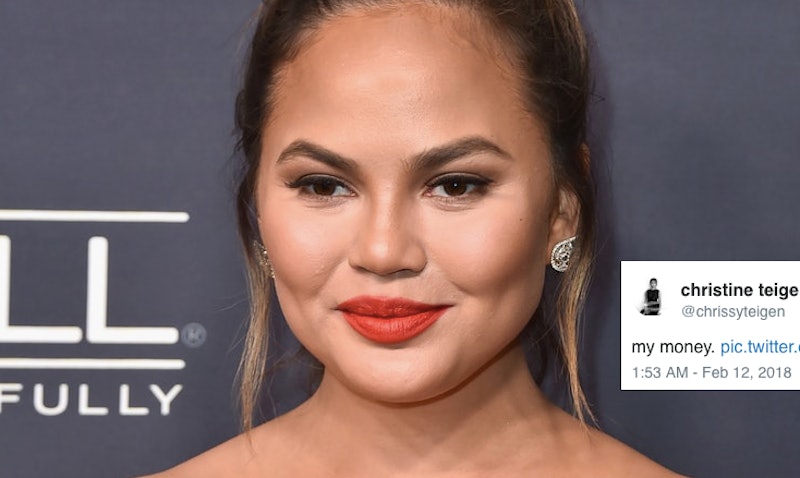 Chrissy Teigen and John Legend might be one of the most beloved celebrity couples out there, but just because he's a famous singer, don't think she hasn't found success all on her own. On Sunday, Teigen had the perfect comeback for a Twitter user who insinuated all she does is spend her husband's money. Not only was it an important reminder of exactly how incredible her career is, but it's also an important reminder not to accuse the women in your life of mooching off of their spouse.

It all started when Teigen shared a photo of her ill-fated dinner that night on Twitter. She'd made what looked like some super delicious lamb chops on the bone, only to drop them on her kitchen floor along with the salad she'd made. The food didn't go to waste, though. "Oh I ate it I don't care," she tweeted. It seems the five second rule applies in her house, as it should. What should she have done, thrown them away just because they might have had a little floor on them?

This is the point in the evening when one Twitter user, for an inexplicable reason, replied to her tweet accusing her of spending all of her time sleeping, eating, and spending other people's money... and if you've been keeping up with Teigen's career, the very idea of her living that kind of relaxed schedule is pretty laughable.

As per usual, Teigen had the best comeback for this rude tweet, because since when has she ever let a Twitter troll off easy? Behold:

Hoo, boy. First of all, awesome way to let that guy know that it happens to be her money she's spending when she spends it, since, according to her tweet, her net worth was $13.5 million last year. Second of all, she pulled this screenshot from a Forbes slideshow that ranked her number three on a list of "the world's highest paid models" in 2017, coming in behind only Gisele Bündchen and Kendall Jenner. Just in case anybody needed proof that this lady is killing it, here it is.

Not that the way Teigen spends her money is anyone's business, but this tweet was the perfect way to clarify that she's so much more than John Legend's wife. Just like her husband, she's incredibly successful, just in a different field. Aside from her lucrative modeling career, she's also a cookbook author, and the host of Lip Sync Battle, just like the Forbes article points out. And for the record, Teigen has 16.1 million followers on Instagram and counting — more than twice as many as Legend. Just saying.

Teigen's response to that tweet couldn't have been more perfect. She let the facts speak for her, which is always effective. Although some days, an existence based on sleeping, eating, and relying on others for financial support does sound ideal, Teigen is not a newborn baby, so she is capable of much more. It's insulting to insinuate otherwise, especially after how hard she's obviously worked to get to where she is today. That kind of success isn't easy to attain.

And while we're on the topic, this exchange between Teigen and her follower brings up an excellent point: It's probably a bad idea to insinuate that any woman is living off of her husband's money, let alone discuss it on social media, celebrity or not. Teigen would probably agree that it's just plain rude.

Teigen is a self-made woman, y'all. And just in case you forget it, it seems like she'll be ready and waiting to remind you.