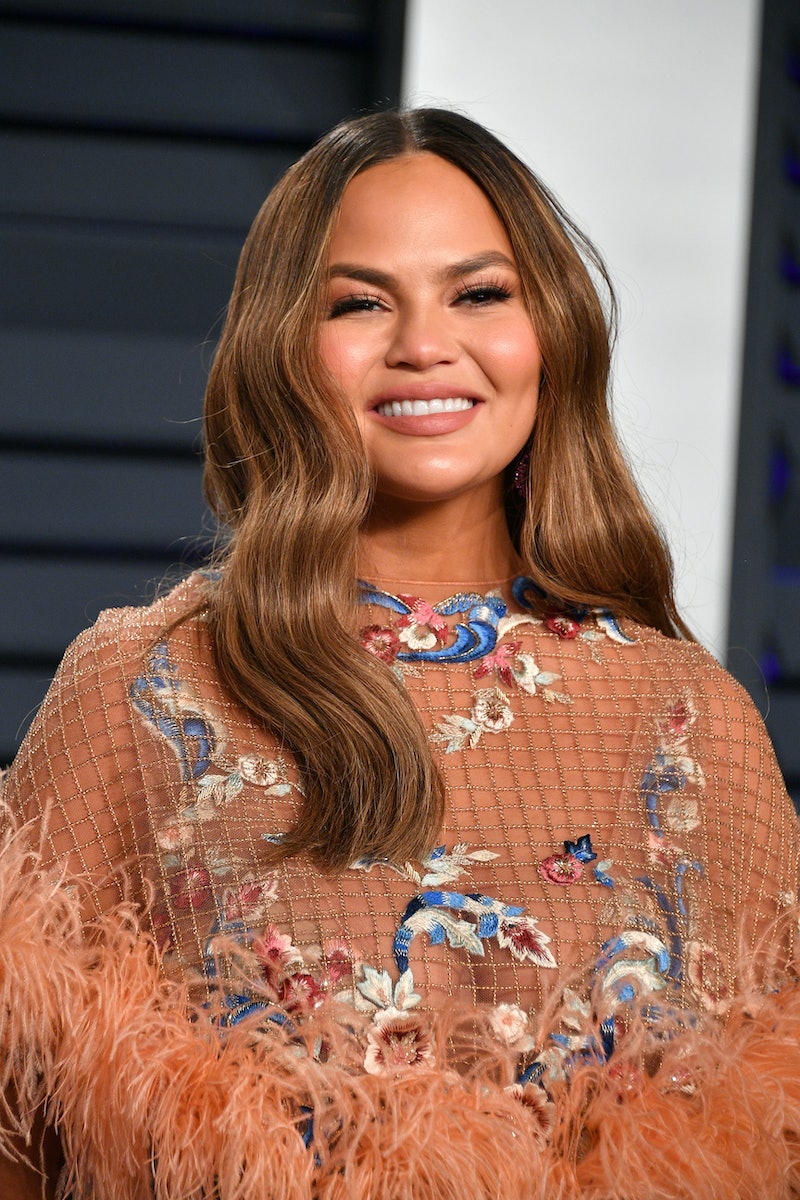 Chrissy Teigen changed her hair just in time for spring, cutting her chest-skimming tresses into a chic bob. But now the model turned cookbook writer has tweaked her style one more time, where Chrissy Teigen has bangs now. The wispy, eye-skimming fringe was paired with a blunt bob, making the style look like the haircut you got during grade school. But on Teigen it looks more '90s chic and less fourth grade cool.

This weekend, Teigen stepped out to an event while seemingly channeling Michelle Pfeiffer when she played Elvira Hancock in Scarface. Teigen's hairstylist for the evening, Laura Polko, shared the look on Instagram with the caption "not a themed party but f*** it."

The event clearly didn't call for an '80s costume, but when you feel like channeling the decade of excess, you have to follow the urge. Polko styled Teigen's bob to curl inward, giving the bob an even more dated aesthetic. But rather than feeling cheesy, Teigen just looked elegant. Teigen paired the wispy bangs with silver eyeshadow and '90s-approved brown lipstick, cinching that retro vibe with her makeup.

The hairstyle was not only reminiscent of Pfeiffer, but also of '90s supermodels. Models like Naomi Campbell and Linda Evangelista sported bangs and tucked in ends during that decade as well.

Teigen isn't the first to revive this iconic look from the decades' past. In 2016, Harper's Bazaar pointed out that "Scarface hair" was having a comeback. Everyone from Elle Fanning to Hailey Baldwin were curling their layers inward, bringing the coiffed look back into the present day.

As for Teigen and her new bangs, the model has experimented with a fringe many times before. In Nov. 2017, Teigen debuted curtain bangs on Instagram, experimenting with the sweep of hair across her forehead. Trimmed by her hairstylist Jen Atkin, Teigen posted a video of the new cut onto her account, assuring fans that her new style wasn't just a pair of clip-on bangs. To drive the point home, Atkin tugged on her fringe, proving that they don't budge.

Interestingly enough, Teigen committed to the bang cut just days after she posted a poll to her Twitter account, asking followers if she should do it. The tweet read "major life dilemma," and asked fans to vote whether or not she should commit to a fringe. The poll was skewed towards using more caution, where 40 percent of voters said Teigen should do it, and 60 percent told her it would be an instant regret.

Followers reminded Teigen that she and bangs haven't always had a happy relationship. In Teigen's interview with Vogue‘s 73 Questions, she told the publication that one of her biggest trend regrets was getting blunt bangs.

The look in question was a hairstyle Teigen wore to the 2014 Billboard Music Awards, where she wore thick, eye-concealing bangs and a thick ponytail.

This Pfeiffer-inspired look, though, is much different. And it's a chic, playful choice for anyone to copy if they want to try something new. When you're copying both Pfeiffer and Teigen, you can't go wrong.