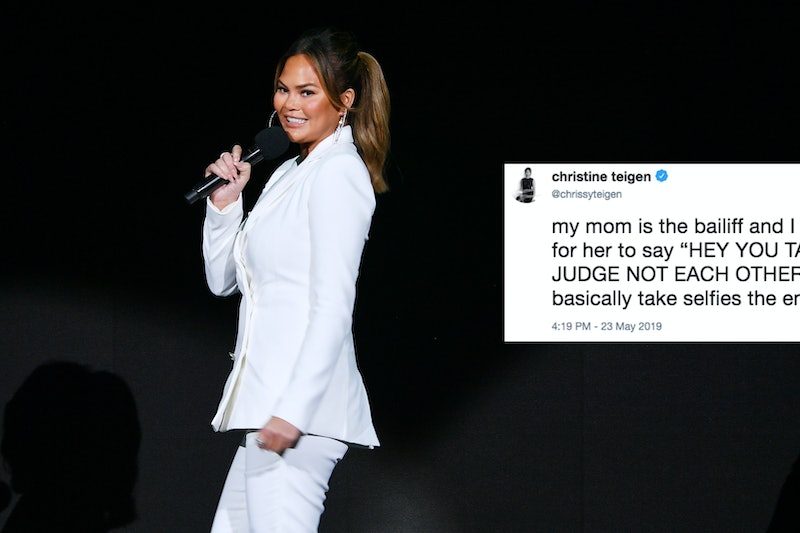 All rise for the honorable Judge Teigen. Yes, that would be Chrissy Teigen. Even though she already wears the hats of mother, wife, chef, author, model, and whatever she does on Lip Sync Battle (it’s a valuable part of the show, OK?), the queen of all trades is adding yet another title to her résumé: judge. No, not on a competition show, although she’ll be doing that soon as well, but in an actual courtroom. Chrissy Teigen will star in Chrissy’s Court, a new mobile comedy show for Quibi that will see her become a modern-day Judge Judy — without any actual judicial experience.

As reported by The Hollywood Reporter, in each episode of Chrissy’s Court, Teigen will reign supreme as the “judge” over a small but real-life claims case. Remarkably, the plaintiffs, defendants, and disputes will actually be real. In this courtroom, her verdicts are final and binding, meaning that all parties involved must agree to the ruling set forth by Teigen. But since she'll likely offer up the best opinions and solutions anyway, this likely won't be a problem for anyone.

In what will most likely be the best part of the entire series, her mom, Vilailuck “Pepper Thai” Teigen, will act as the “bailiff” and maintain order in the courtroom. If there’s anyone who can calm down the chaos of a courtroom, it’s a strict but loving mother.

"When Cellino & Barnes broke up, I was devastated. I knew I had to take matters into my own hands," Teigen joked in a statement to THR. "Here’s one jury duty you won’t want to miss.”

While the concept of the show sounds incredible, it’s hard not to wonder about the legalities of it. Judge Judy was a Manhattan family court judge and prosecution lawyer before staring her highly acclaimed show. Teigen, while an expert at most things, likely does not have the proper judicial experience to legally judge over court proceedings, even though her job on Lip Sync Battle really should count, quite frankly.

Although her actual verdicts will be murky legally, they’re sure to be highly entertaining and probably justifiable. And Teigen’s decision to follow in Judge Judy’s footsteps could turn out to be a brilliant one. After all, Judy was the world’s highest-paid TV show host in 2018, even beating out legends like Ellen DeGeneres. Who wouldn’t want a piece of that courtroom cash?

Chrissy’s Court will be one of the first series on Quibi, a service that will offer short-form shows and longer narratives separated into 10-minute “chapters” designed to watch on your mobile phone. According to the report, shows from Jennifer Lopez, Lena Waithe, Guillermo del Toro, Anna Kendrick, and Scooter Braun will also be on the platform, scheduled to launch in Spring 2020, so the newly minted "judge" will be in great company.

As expected, Teigen posted about the show announcement on Twitter. She joked, "LADIES AND GENTLEMAN, SMALL CLAIMS COURT JUST GOT A LITTLE MORE PETTY." She also shared a second tweet about her mom's special role.

She also extended an invite to participate in the show in a subsequent message: "if you’re mad about some petty ass sh*t and wanna take that person to court, you let us know."

Plus, you can also Teigen as a totally different type of judge on Bring The Funny, an upcoming comedy competition that will see her judging aspiring comedians alongside Kenan Thompson and Jeff Foxworthy. She's also currently developing two new food shows for Hulu, including one tentatively titled Family Style with Momofuku chef David Chang. It will soon be The World According To Chrissy, and we’re not complaining.