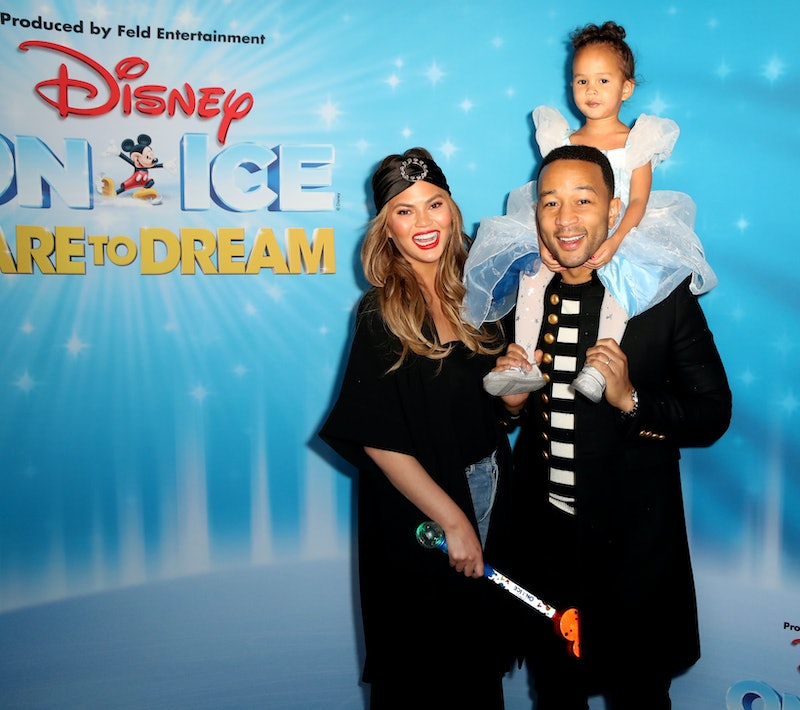 Brace yourselves, everyone, because I don't know if you're going to be ready for the amount of cuteness that Chrissy Teigen, John Legend, and their daughter Luna are bringing. As shown on Instagram, Teigen and Legend got Luna her first big girl bed. And the videos celebrating the occasion are sure to brighten up anyone's day.

Teigen announced to her followers on March 14 that it was a "BIG DAY OVER HERE" because of Luna's major milestone. In the first clip that she shared, the parents can be seen showing their daughter her new big girl bed. The Lip Sync Battle host asks Luna, "Isn't it so pretty?" And the tot nods her head in the affirmative. She may find her new bed set pretty, but she did have some concerns about the setup. As she approaches her new bed, she asks her parents about the stool in front of it, which is there to help her into the bed.

Upon further inspection, Luna had another, very serious, issue with the the new layout: Her stuffed animals were nowhere to be seen. After putting her hands on her hips in frustration, she walked over to where her toys were cast aside, asking her parents, "Why did you take these out?" The youngster asked her parents yet again why they moved the stuffed animals as she gathered them up to place them on her new bed. Lesson learned, don't mess with Luna and her stuffed animals.

Teigen posted a follow up video, which featured Luna in bed re-arranging her cast of animal characters (with some help from her pops). Once she got comfy in her new setup, she really started to love it. She then said, "thank you, mama," with the biggest smile on her face. Stuffed animal crisis averted.

If you follow Teigen on social media (which is a must, by the way), then you would know that her daughter is really growing up and experiencing a couple other exciting firsts. Along with getting her first big girl bed, she also recently attended her very first dance class. Naturally, the cookbook author came through with the clips from the occasion, which featured Luna strutting her stuff alongside her classmates.

In another video from the dance class, Luna tries her hand at some jumps. But, when she goes on to the next activity with the instructor, she appears to run away from said instructor with a big, impish smile on her face. Honestly, Luna is simply adorable as she does her dance moves, but the best part of the video may just be Teigen giggling along to her daughter's antics.

The whole thing is just too cute, and luckily, you can watch it for yourself, as the ballerina-to-be's mom put the clip on Instagram for everyone to see.

Between her many exciting firsts and, of course, her new status as a big sister to little brother Miles, Luna is truly growing up. Thankfully, Teigen is there to capture all of those major milestone moments, and all the cuteness to boot, for the family's many adoring fans.