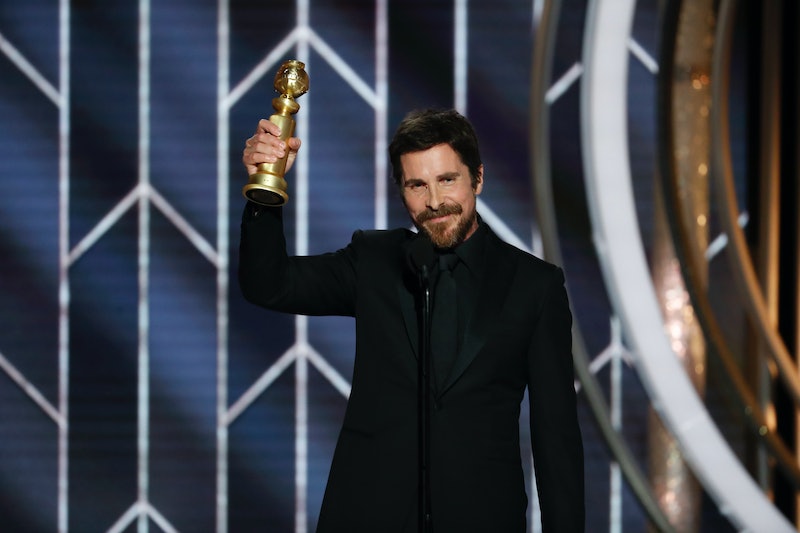 Christian Bale might not have surprised fans by winning the Golden Globe for Best Lead Actor in a Comedy for playing Dick Cheney in Vice, but he did take some people watching the Globes aback when he opened his mouth to accept the awards. Many Golden Globe viewers were shocked to find out that, yes, Christian Bale is British — or Welsh, in fact.

Bale might be best known for playing Americans like Patrick Bateman in American Psycho or Bruce Wayne in The Dark Knight, but the fact is that he's not actually American. The actor was born in the United Kingdom, though he only occasionally uses his real accent in film roles. This might explain why, when Bale took the stage at the 2019 Golden Globes to accept his award, fans were taken aback to hear the actor speak with a heavy accent. "Umm, I live under a rock," wrote writer Briana Luca, @bribrilukes. "I had no idea Christian Bale was British." And she wasn't the only one learning something new on Sunday night. "I thought christian bale [sic] was doing a fake accent but no," wrote @modernmack. "he's been british the whole time [sic]." But, really, if you're one of the many fans who was surprised to find out Bale's original nationality, you might be a bit out of the loop, but you're certainly not alone.

It's totally understandable for audiences to be fooled into thinking Bale is actually American. The actor is such a mainstay in Hollywood, and that is, in large part, due to roles he played with an American accent. He so rarely uses his own native accent on screen, there's even a thread on Reddit called "What films does Christian Bale use his natural accent?" A 2013 article published by The Atlantic found that, in his last 20 films (at the time), Bale only played three British characters — that's just 15 percent! (Those roles, in case you were wondering, were in the Prestige, The New World, and Reign of Fire.) The article went on, asserting that he played Americans a total of 16 times, and Greek once, in Captain Corelli's Mandolin.

Bale is somewhat of a master of accents. So much so that during a 2016 Reddit AMA, he was asked about why American actors tend to be only mediocre at British accents. "You know what the mistake is people make? Imitating other films instead of imitating other people," he wrote, as reported by Cinemablend. He continued:

"Because, and especially in Americans doing English accents why shouldn't they be able to do them impeccably, it's because largely you get a sort of middle to upper class accent that is represented in film and in television that makes it way across the atlantic [sic] and then all Americans think all English speak that way which is absolute bollocks, so it would be actually go to the place and talk to the people and it's the same way going the other way."

Hey, if Bale can convince an entire fandom that he's American, then maybe knows what he's talking about.