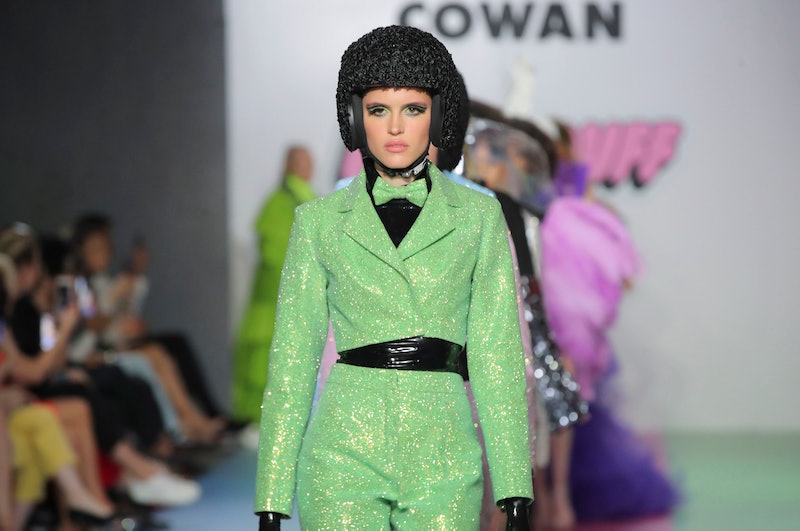 British-born designer Christian Cowan is known for his bold designs and affinity for embellishment. At 24 years old, his larger-than-life creations have earned him a dedicated following from some equally larger-than-life celebrities like Lady Gaga, Beyoncé, and Cardi B. So naturally, his latest collaboration with the iconic and fierce Powerpuff Girls was a match made in fashion heaven.

Partnering with the Cartoon Network, Cowan gave a first look at his Powerpuff Girls-inspired designs last month during New York Fashion Week. On March 8, his Spring/Summer 2019 collection made its highly anticipated debut at City Market Social House in Los Angeles. Emphasizing the Powerpuff Girls' message of female empowerment, the show was held on International Women's Day and benefitted She's The First, a non-profit organization providing an education, mentorship, and global leadership training worldwide to girls who will be the first generation of high school graduates in their families.

While the clothes included structured tulle dresses, a neon light-up coat, and crystal-embellished suits in Blossom, Bubbles, and Buttercup coordinating shades of pink, blue, and green, the beauty looks were not-to-be-missed — and a way less expensive way to channel your fave character. Though there were certainly cartoonesque elements to the hair and makeup, like Cowan's designs, this was no literal recreation of the crime-fighting trio.

"For hair, Bumble and Bumble Global Fashion Director Laurent Philippon and I wanted to reflect the characters' personalities, whether it's Bubbles, Blossom, and Buttercup, or Him and Mojo Jojo," Cowan said in a press release.

Whether the models were representing the heroes or villains, for Philippon, that meant creating several different looks with serious attitude — or, as Cowan appropriately dubbed it, "superhero hair."

"The Powerpuff Girls are, of course the base of the inspiration, but it's really taken into high fashion," Philippon said.

An array of tousled updos and sleek ponytails made their way down the runway alongside bolder styles like pink, blue, and green waist-length braids. Mimicking Cowan's structured designs, models with natural curls were given different graphic shapes that enhanced their natural hair. Prepping hair with Bumble and Bumble Curl Defining Creme for definition, Philippon brushed out the curls and used Spray de Mode to help comb the hair into gravity-defying shapes.

There were a few more obvious references to the show's characters, too, with several girls sporting dark, graphic fringe. One model even portrayed Miss Bellum with major red curls that were created by backcombing a wig and adding even more texture with Does It All hairspray.

And then there were the bouffants. Wound into a sleek French twist at the back with sky-high volume at the crown of the head (thanks to a ton of Thickening Dryspun Texture Spray and some backcombing), Philippon added a colorful finishing touch.

"We're doing a hair turban that I did with transparent acrylic paint so that it looks like it's lacquered," he explained of the hair accessory that was literally sewn into the models' hair in a corset-like stitch.

"There's a nod to the three main characters with pink, blue, and green, but it's more about the individual," Stapleton said of the graphic and glitter eyeliner looks he created. "We did either white or black liner through the crease, blended different colors on the base of the lid, and a black liner connecting that depending on the character. Then under the eye, we did a disconnected liner that was in any multitude of colored glitters like green, red, violet, and blue."

The rest of the face was clean with a natural satin finish on the skin and lips, but still tailored to suit the models' characters as well as their own features. In fact, embracing individuality and feminine power is what the collection was all about.

"The Powerpuff Girls are all about acceptance and inclusion and female power, and that was the aesthetic we wanted to bring into the show," Cowan said.

And really what's more empowering than embracing your individuality with the help of your childhood heroes?