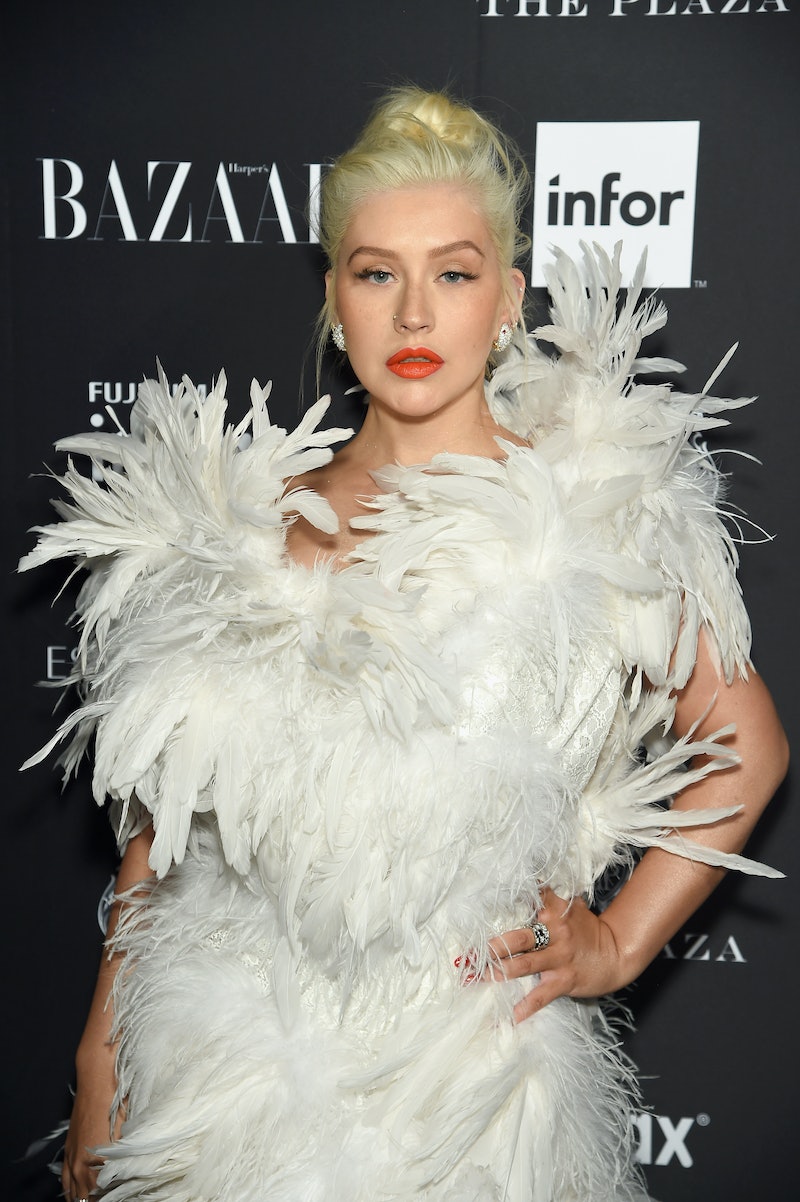 Over the last several years, she's been incredibly candid about growing up around domestic violence. Now, in a new interview with Cosmopolitan, Christina Aguilera's comments about her childhood explain how the singer approaches her relationships today.

While speaking with the publication for her October 2018 cover story, Aguilera recalled the "Dirrty" period of her then-rising career. It was 2002, and with the release of her sophomore album, Stripped, came brash new songs and a brash new image.

Despite appearing fiercely independent and outwardly confident, though, the star had a hard time standing up for herself behind the scenes. Aguilera alleged several uncomfortable incidents involving male music industry executives back then, and voiced regret about how she handled those situations. Aguilera explained to Cosmopolitan,

"My dad was very dominant with my mom, and I always knew I was never going to let a man take advantage of me like that. But ­making it in the business was a completely different mindf*ck. I didn’t even know to think about it like, 'Wow, this person’s really disgusting, the way he talks about women.' I had no super-strong women around me, and I thought feeling inferior, small, or helpless just had to be accepted."

While singles from Stripped like "Dirrty," "Beautiful," and "Fighter" attracted the most attention during that period, another track — "I'm OK" — was one of the first times she'd publicly opened up about witnessing her father allegedly abuse her mother. (According to Us Weekly, in 2002, Aguilera's father denied ever abusing the singer and her sister. "I never abused them in any way and they know that," he reportedly said. "I'm sorry to have ever raised a hand to my wife, but it was never brutal like Ike and Tina Turner.")

In "I'm OK," Aguilera wrote, "It hurt me to see the pain across my mother’s face / Every time my father’s fist would put her in her place / Hearing all the yelling, I would cry in my room, hoping it would be over soon / Bruises fade, father, but the pain remains the same / And I still remember how you kept me so afraid."

Over the next few years, Aguilera would go on to be a lot more vocal about that experience. In 2015, she partnered with Verizon's HopeLine program for domestic abuse prevention. "Domestic violence is such a difficult thing to experience and live through," she told Forbes of that partnership, "and I know first-hand how powerless it can make a person feel."

There was a silver lining to what she went through as a child, though. It directly informed how she handles her personal relationships today. "I made up my mind at a really young age that I had to do for myself," she told Cosmopolitan in her new interview. "I never wanted a man to tell me what I could and couldn’t do, what I could and couldn't spend. I always knew I had to be the queen of my castle."

Mission accomplished. It's been 15 years since she first started topping charts, and she's still one of the biggest pop stars in the world today. She released her latest album, Liberation, earlier this summer, and is now just days away from kicking off her eponymous North American tour. Being on tour means stepping away from her at-home castle for the next few months, but don't expect her to take off her crown anytime soon.