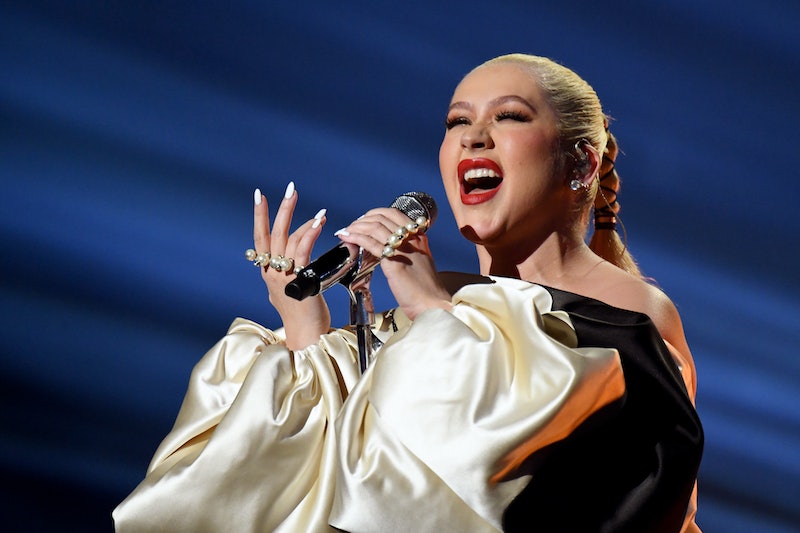 In a continuation of her “Reflection” legacy, Christina Aguilera released a new song for Mulan. The former The Voice coach debuted her new track “Loyal Brave True” — as well as a reimagined version of “Reflection” — for the motion picture soundtrack of Disney’s live-action Mulan remake on Friday. With Aguilera’s powerhouse vocals, “Loyal Brave True” serves as the ultimate anthem for the film centered on a young Chinese woman, Mulan (Liu Yifei), who disguises herself as a man in order to enlist in the Imperial Army to protect her ailing father (Tzi Ma) from serving in the war.

In the lyric video for “Loyal Brave True” uploaded by Disney on Friday, one resounding question is posed in Aguilera’s ballad: What would a warrior do? “War is not freedom, over my shoulder, I see a clearer view,” Aguilera sings. “All for my family, reason I’m breathing, everything to lose.” In a lyrical nod to “Reflection,” she continues, “Should I ask myself in the water, what a warrior would do? Tell me underneath my armour: am I loyal, brave, and true?”

On Twitter, Aguilera shared a preview of “Loyal Brave True” and reflected on the significance of the film. She tweeted, “Mulan has been such a special part of my life & this is a beautiful continuation of the legacy.” In a press statement, she added, per Entertainment Weekly, “Mulan and the song ‘Reflection’ coincided with getting me my first record deal. It’s amazing to come back to such an incredible movie that’s full of power and meaning, and that meaning holds the test of time: staying true to yourself, being who you are, and teaching how to be fearless.”

Aguilera originally recorded “Reflection” at the age of 16 for the original 1998 animated film. Directed by Niki Caro, Disney’s live-action Mulan will also star Donnie Yen as Commander Tung, Jet Li as the Emperor, Jason Scott Lee as villain Bori Khan, and Pei-Pei Cheng as the Matchmaker. Perhaps most controversial, the remake won’t include musical numbers or Mushu the dragon. Per Caro, the film will take a more realistic approach and derive more influences from the original legend “The Ballad of Mulan” rather than the Disney version.

In an interview with Digital Spy in January, Caro explained the decision to depart from the 1998 film’s musical roots. “We don't tend to break into song when we go to war," Caro said. “Not that I'm saying anything against the animation. The songs are brilliant, and if I could squeeze them in there, I would have.” Still, Caro said the film would “honor the music from the animation in a very significant way.”

Mulan arrives in theaters on March 27.