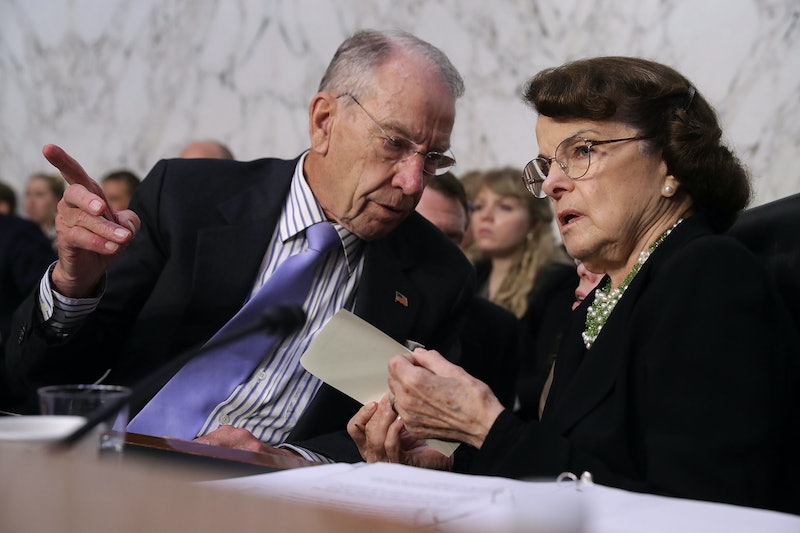 The saga that is Judge Brett Kavanaugh's nomination to the Supreme Court has taken another turn. On Saturday, the first woman to publicly accuse him of sexual assault sent a personal letter to the head of the Senate Judiciary Committee in the midst of negotiations for her to testify about her alleged assault. Read Christine Blasey Ford's letter to Iowa Sen. Chuck Grassley, where she described her "agony yet urgency and a civic duty" to tell her story.

The letter — which is signed with her professional name Christine Blasey, her maiden name — was made public on Monday.

Over the summer, Ford sent confidential letters to her congresswoman and Sen. Dianne Feinstein, the ranking Democrat on the Judiciary Committee, describing her alleged assault. On Sept. 16, Ford came forward to The Washington Post.

There has been a lot of back and forth between your staff and my counsel, and I appreciate the chance to communicate with you directly. I kindly ask you to use your best discretion regarding this personal letter.

When I first learned Brett Kavanaugh was on the short-list of nominees to fill a Supreme Court vacancy, prior to the President's selection among a list of what seemed to me as similarly-qualified candidates, I contacted my Congressperson's office in an attempt to provide information that could be useful to you and the President when making the selection from among a list of candidates. The decision to first report the assault to my Congresswoman, Rep. Anna Eshoo, was a very difficult one, but I felt that this was something that a citizen couldn't NOT do. I felt agony yet urgency and a civic duty to let it be known, in a confidential manner, prior to the nominee being selected. While it was difficult, I was able to share my information with two contacts during the period between the short list announcement and Mr. Kavanaugh's selection.

Mr. Kavanaugh's actions, while many years ago, were serious and have had a lasting impact on my life. I thought that knowledge of his actions could be useful for you and those in charge of choosing among the various candidates. My original intent was first and foremost to be a helpful citizen — in a confidential way that would minimize collateral damage to all families and friends involved.

I then took the step of sending a confidential letter to one of my Senators, Ranking Member Feinstein, and I understand that you have a copy of that letter. I am certainly prepared to repeat the facts in that letter and to provide further facts under oath at a hearing. I would welcome the opportunity to meet with you and other Senators directly, person to person, to tell you what occurred. I will answer any questions you have. I hope that we can find such a setting and that you will understand that I have one motivation in coming forward — to tell the truth about Mr. Kavanaugh and his friend Mark Judge did to me. My sincere desire is to be helpful to persons making the decision.

In addition to talking with you and other Senators directly, I have asked my lawyers to continue discussions with your staff about the conditions you have proposed. As I am not a lawyer or a Senator, I am relying on them and you to ensure that the Committee will agree to conditions that will allow me to testify in a fair setting that won't disrupt families and become a media TV show. While the nationwide outpouring of love has been heartwarming, I am spending considerable time managing death threats, avoiding people following me on freeways, and disconcerting media intrusion, including swarms of vans at my home and unauthorized persons entering my classroom and medical settings where I work. I have received an inordinate number of requests to appear on major TV shows to elucidate further information, to which I have not responded. My goal is to return soon to my workplace, once it is deemed safe for me and importantly, for students. Currently, my family has physically relocated and have divided up separately on many nights with the tremendous help of friends in the broader community. Through gracious persons here and across the country, we have been able to afford hiring security. While I am frightened, please know, my fear will not hold me back from testifying and you will be provided with answers to all of your questions. I ask for fair and respectful treatment.

Ford is scheduled to testify in front of the Senate Judiciary Committee on Thursday. On Monday afternoon, Grassley publicly released his response to her letter, saying both Ford and Kavanaugh "deserve a credible and fair process."