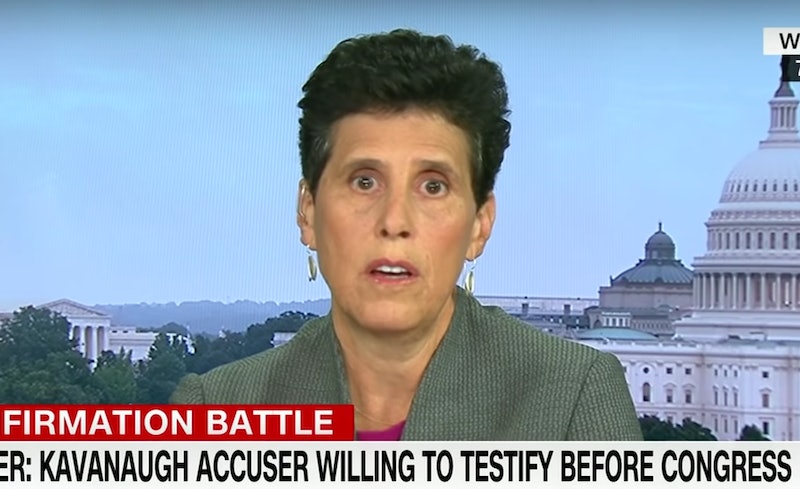 The woman who accused President Donald Trump's Supreme Court pick of attempting to sexually assault her in the 1980s (which he's denied) has largely communicated with the public through her attorney. Christine Ford's lawyer, Debra Katz, has decades of experience fighting sexual harassment cases and was even named a "Leading #MeToo Lawyer" by Washingtonian Magazine in June.

"It hurts people in such a deep way," Katz told the magazine in June, referring to sexual harassment. "It causes them to question their value, it erodes their self-esteem, and it’s one of the ultimate indignities that people experience in the workplace."

Now a founding partner of the law firm Katz, Marshall & Banks, the Long Island native specializes in privately settling sexual harassment cases — meaning no one goes to trial and, often, the scandal isn't publicized. But she's worked on plenty of high-profile cases, too. In fact, earlier this year she filed a lawsuit against celebrity chef Mike Isabella, alleging that he and his partners sexually harassed a female manager. Isabella denied the allegations, but he and the manager settled the case for an undisclosed amount in May with stipulations that Isabella's restaurant company take "corrective measures" to prevent future harassment, The Washington Post reported at the time.

Katz said in a statement provided to The Post that her client "met one of her central goals," which was to have the restaurant company "enter in a binding agreement obligating it to take corrective measures, including robust training, and to adopt policies to encourage a work environment free of sexual harassment."

Katz has numerous awards under her belt, including being recognized as "Civil Rights Lawyer of the Year" for Washington D.C. this year by The Best Lawyers In America. After attending the University of Wisconsin Law School, Katz clerked for the William Bablitch on the Wisconsin Supreme Court and held a Women’s Law and Public Policy Fellowship at Georgetown University Law Center. She helped launch Katz, Marshall & Banks in 2006, but got her start representing sexual harassment survivors long before.

In 1995, she represented Kitty Block, who at the time was an attorney for the Humane Society of the United States and alleged that her boss was harassing her. Although he denied the allegations, Block's boss was eventually fired after she sued, and Block took over for another accused sexual harasser as president and CEO of the Humane Society earlier this year, The Post reports.

Katz is now at the center of Brett Kavanaugh's confirmation hearing to potentially receive a lifetime appointment to the Supreme Court. Katz' client has accused Kavanaugh of attempting to rape her when they were both in high school, covering her mouth so no one could hear her screams. Kavanaugh has categorically denied the allegations, but they've already delayed his confirmation vote that was originally scheduled for this week.

"Women are feeling emboldened to come forward because they have a sense that people will actually now believe them," Katz told Washingtonian Magazine of the #MeToo movement this summer. "[And women] who do come forward tend to find more people who are willing to support them."

Although Ford has reportedly received death threats for coming forward with her allegation about Kavanaugh, women around the country have voiced their support for her fight. And she has one of D.C.'s most experienced sexual harassment attorneys on her side.