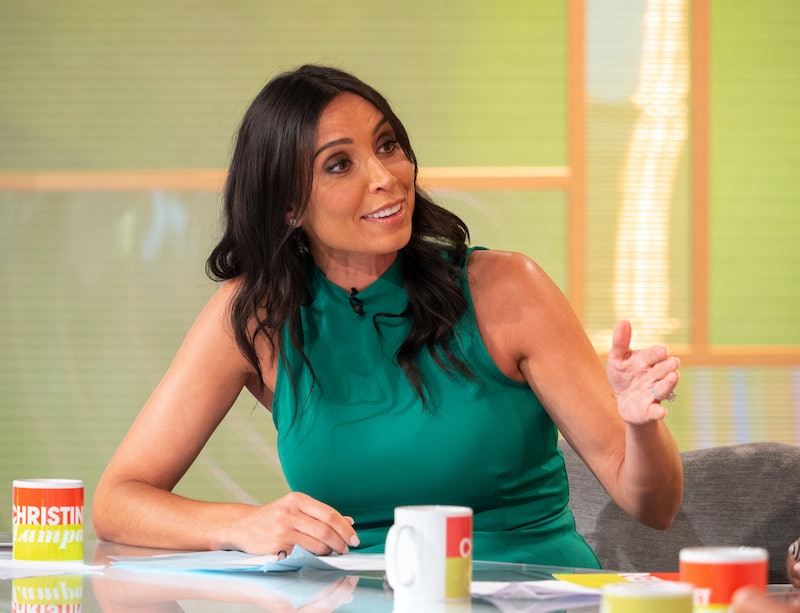 In case you missed the news, TV presenter Christine Lampard is pregnant with her first child. The 39-year-old is married to Frank Lampard, former epic goalscorer for Chelsea and now manager of Derby County, and the couple are expecting in just over two months, in September. Nevertheless, recent comments she made about her pregnancy raise some interesting questions around the pressure we put on pregnant women.

In a recent quote published by The Mirror, Lampard insisted that she "couldn’t care less about putting on weight as long as everything’s OK inside." It's great to hear that Lampard is comfortable with the journey her body is undergoing through her pregnancy — more power to her. The story didn't disclose if Lampard was invited to discuss the topic or volunteered the information but either way, it seems sad that Lampard needed to justify or explain being ok with weight gain during a pregnancy.

It seems obvious, but the health of mother and baby is medically the only thing that matters, so each woman should be free to conduct a pregnancy safely in the way that she wishes, free from scrutiny about her weight, shape, or anything else. Lampard went on to clarify her work out routine, saying, "I’m not training, just walking the dog. That’s it. I’m just taking it all in my stride."

Lampard's comments give us an interesting insight into the pressure of being a pregnant woman in 2018, especially a famous one. If women do gain weight, they're often faced with enormous pressure to lose it once they give birth to their child. Who can forget the fat shaming that Kim Kardashian West endured while pregnant with her North West? "It was the worst! I couldn’t help it, and everyone would say, 'She can’t stop eating,'" she told C Magazine in 2015 of the comments that were made about her. "Before I was always smiling, and so into being out and about. After I had the baby, I was like, these are the same people that made fun of me, and posted the stories that were so awful, calling me fat for something I couldn't control. I don't want to smile for them. I don't want to be out."

Then there's the other side of the equation, with some people finding themselves slammed for apparently not gaining enough weight, like poor Vogue Williams, who recently spoke out on This Morning about experiencing pregnancy-shaming.

In the interview she mentioned that she had been criticised for continuing to exercise while pregnant. "To be told you are putting your unborn child at risk, I think that’s really offensive," she said in the interview. "Unless you’re a doctor you should be dolling out that advice to anyone anyway." She also revealed that she booked a doctors appointment after people left comments saying things like, "Your bump is too small, there’s something wrong with you."

Just falling pregnant is a challenge for some women, and is one of those daily miracles that I sometimes still cant get my head around. Lampard is obviously thrilled to be pregnant, telling The Sun, “we're all excited, you get to the stage where you don't think about it and you think maybe it won't happen." And to The Mirror, she said, "sometimes I forget I’m pregnant and then there’s moments I don’t believe it. You see your reflection and go, ‘Oh God, that’s me.’” It seems strange that as a society we create conversations around a women's weight at any time, let alone a time like this.

She told The Mirror she was feeling excited, and that she was "eating a lot of ice cream, but I think that’s more to do with the weather than the pregnancy cravings." Well, I think you're brilliant, Christine. I've always had a soft spot for the Loose Women star, and think we should all stop talking about weight gain, and instead get discussing potential names for Baby Lampard.