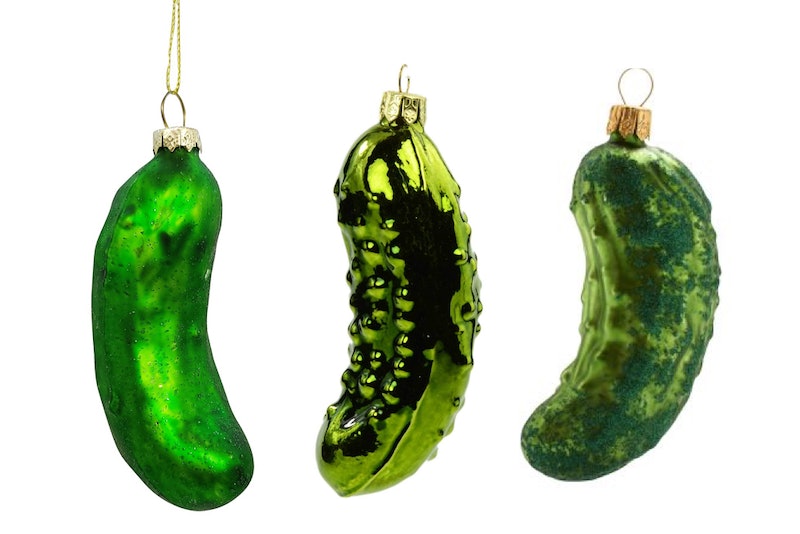 For some people, December is the season of lots of family time, spending time looking at a lit-up Christmas tree, and nostalgically reminiscing about childhood. For others, it's the season of trying to find a pickle-shaped Christmas ornament on the tree before all your siblings do. The tradition of Weihnachtsgurke, or the Christmas Pickle, is an adorably fermented holiday custom you may not have heard of, but should have, Women's Health reports. This quirky tradition might have its roots in Old World Germany, but according to The New York Times, most Germans have never heard of Christmas pickles. According to The New York Times, out of 2,057 Germans polled by YouGov, 91 percent were clueless about Weihnachtsgurke.

The Christmas Pickle mystery, The New York Times reports, may originally stem from German descendants who settled in the American Midwest. Legend has it that a starving German Civil War soldier pleaded for a pickle from his Confederate captors on Christmas Eve, and survived, says Women's Health. Another version of the Christmas Pickle tale says that two boys were trapped in a pickle barrel by an evil innkeeper, and were rescued by St. Nicholas.

Or, Weihnachtsgurke could be a late 19th century marketing ploy used to sell German Christmas tree ornaments, which is far more likely than the St. Nicholas thing. Five-and-dime store magnate, F.W. Woolworth, started importing German glass Christmas ornaments in 1880, according to Wide Open Country, and the story may have been made up to help sell the newly created Christmas Pickle tree adornments. German glass maker Sascha Muller told the New York Times that he first learned about Christmas pickles in the 1990s during a trip to Michigan. Taking the legend back to Germany with him, his glass artisans now churn out 50,000 Weihnachtsgurken (that's plural Weihnachtsgurke) per year — making the gherkins one of their most popular Christmas tree ornaments to date. While we may never know the true origins of Christmas pickles, they’re certainly festive.

According to Martha Stewart, despite the fact that a lot of folks have no real idea where the Christmas Pickle came from, it’s a tradition that goes something like this: A whimsical green pickle ornament is hidden among the boughs of the family Christmas tree on Christmas Eve. The first child to find the concealed gherkin on Christmas morning gets a special gift or reward, like getting to open their presents first, and is promised good luck for the coming year. And if you really love the idea of Christmas Pickles, you can even attend the Berrien Springs Annual Pickle Festival, in Berrien Springs, Michigan (a region primarily settled by German immigrants, by the way), according to Women’s Health.

No matter the origins of the charming Christmas Pickle, the tradition has been mostly unknown outside the Midwest states. With ornaments cropping up all over the internet in recent years, however, more and more tiny green dills are showing up on Christmas trees nationwide. And with so many versions to choose from — from little pickles adorned with Santa hats, to gherkins made of glass or ceramic — there’s a Weihnachtsgurke for anyone.