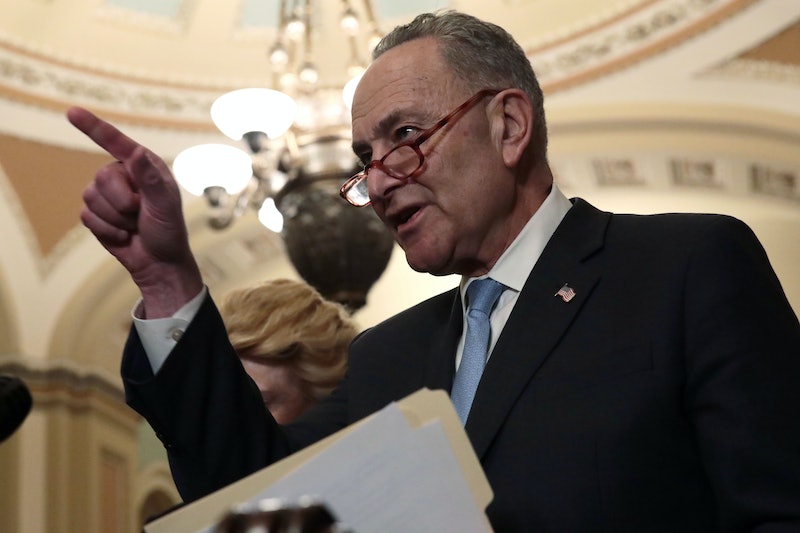 The Senate Minority Leader announced in a statement on Tuesday that he'll be bringing Ronan Byrne, an air traffic controller who worked without pay during the government shutdown, to the State of the Union as his guest, according to The Hill. Chuck Schumer's State of the Union guest is meant to send a message to President Trump about the effects of some of his proposed policies and actions, according to the senator's statement. In it, he says he hopes to show that "these employees and their families were the true victims of the counterproductive shutdown."

Byrne is an air traffic controller at the New York Terminal Radar Approach Control (TRACON), located in Westbury, New York. As an essential federal employee, Byrne worked without pay for 35 days. And as a father of four young boys under 5 years old, his family "was saddled with the uncertainty of not knowing when he would receive his next paycheck," Schumer's statement said. Still, Byrne showed up for work every day.

Schumer continued, saying Byrne “is a prime example of a dedicated and professional federal worker – doing a vital job for the American public – who was put through the wringer for no good reason."

The 35-day government shutdown — the longest in history — ended on Jan. 25 when Trump signed a bill to reopen the government for three weeks, according to the Associated Press. The bill included backpay for 800,000 federal workers who went without pay — some of them essential employees like Byrne, who were expected to show up to work because they perform an essential duty.

The Transportation Security Administration reported on Jan. 21 that 10 percent of its employees had called out of work: "many employees are reporting that they are not able to report to work due to financial limitations," TSA said in a statement, according to USA Today. A few days later — on the same day Trump signed the bill to temporarily reopen the government — four major airports saw significant delays due to what the Federal Aviation Administration labeled "staffing" problems, according to USA Today.

Though the shutdown is delayed, tensions are still high between Trump and Schumer. On Tuesday, just hours before the State of the Union, Schumer said on the Senate floor that, though Trump plans to call for unity during his address, he “spends the other 364 days of the year dividing us,” according to TIME.

I see Schumer is already criticizing my State of the Union speech, even though he hasn’t seen it yet. He’s just upset that he didn’t win the Senate, after spending a fortune, like he thought he would. Too bad we weren’t given more credit for the Senate win by the media!

An administration official told reporters Trump's speech is titled "Choosing Greatness," and it will focus on immigration, trade, infrastructure, health care, and national security, according to ABC News. He is also expected to address abortion and the recent events in Venezuela. The address will start at 9 p.m. EST.