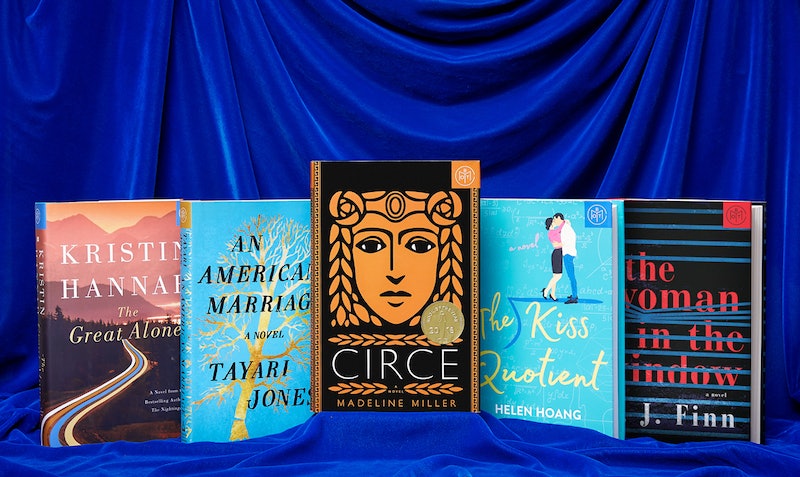 It's the end of the year, which means it's a time for reflecting, for goal-setting, and for frantically racing through your TBR pile over the holiday break to attempt to hit that "reasonable" goal (150 books? Seriously?) you set back in January. Fortunately, there are plenty of end of year "best of" lists to help you choose new books. On Wednesday, the book subscription service Book of the Month announced their "best of" the year — the coveted title of Book of the Year, as selected by their 150,000 members. The votes are in, and the Book of the Year is Circe by Madeline Miller. Along with the title, Miller wins a $10,000 prize.

Book of the Month is a subscription service that sells $9.99 "credits" which can be redeemed for one of five pre-selected newly released books each month. (More credits can be purchased for additional books.) On the first day of each month, the team at Book of the Month announces their new selections; in December, these included The Far Field by Madhuri Vijay, One Day In December by Josie Silver, An Anonymous Girl by Greer Hendricks and Sarah Pekkanen, Severance by Ling Ma, or No Exit by Taylor Adams.

Over the course of 2018, 60 books were selected by the team at Book of the Month. Twenty of these books were named as nominees for the book of the month, and of those, five were selected as finalists: Circe by Madeline Miller, The Great Alone by Kristin Hannah, An American Marriage by Tayari Jones, The Kiss Quotient by Helen Hoang, and The Woman in the Window by A.J. Finn.

The winner, Circe, is the highly-anticipated follow-up to Miller's beloved 2011 book The Song of Achilles. An instant #1 New York Times bestseller, Circe is a feminist retelling of the Greek myth of the first witch in western literature, Circe, the daughter of Helios. Forsaken by the gods, she is exiled to a lonesome island, where she comes in contact with some of the greatest figures in Greek mythology, including Odysseus and Jason and the Argonauts. On her island, she also fully embraces her magical abilities as a witch.

In an interview with Bustle in April 2018, Madeline Miller said she believes that what makes Circe a witch is that "she's an embodiment of male anxiety about female power."

"That’s really what witches are. Witches are women who have more power than society says they should," she said. "Those are the women who get called witches. And they can be beautiful and alluring like Circe, that’s definitely one of the types. They can also be hideous. But in all cases, they have more power than they should, according to society. And what’s amazing is how strongly this anxiety about female power is still with us. I can’t believe that modern day female politicians are called witches. Still!"

For a look at the full list of nominees and finalists for Book of the Year, visit Book of the Month.