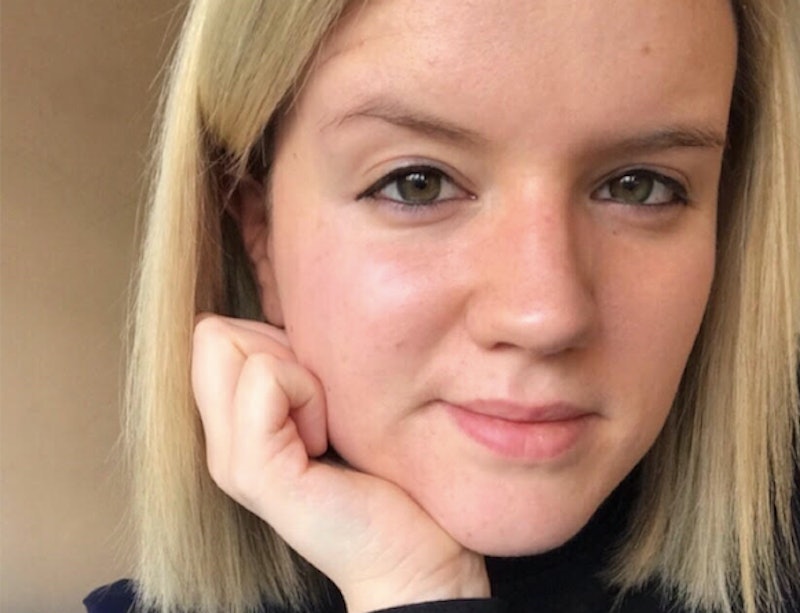 Though running an Instagram account with over 40,000 followers isn't Clare Sheehan's full-time job, that doesn't mean she doesn't view it as a responsibility. Sheehan, an Instagrammer who posts about body positivity (her account handle is simply @becomingbodypositive), fat acceptance, and eating disorder recovery, has built up her following on radical, brutally honest conversations about bodies. Sheehan's unique focus on Instagram is a type of activism that's based in information and open dialogue — nothing is sugar-coated. Sheehan tells me she simply isn't interested in selling the stale, limited version of body positivity that brands often co-opt. Sheehan gets it, and her followers know it.

"As the term 'body positivity' skyrockets in mainstream popularity and gets co-opted into the marketing strategies of deep-pocketed brands, its meaning has become increasingly diluted and centered around bodies that make the concept easiest to sell (read: thin, white, cishet, financially secure, and able-bodied)," Sheehan tells Bustle. "What’s most worrisome here is the message being sent — that body positivity is no longer a safe space for the radical politics of fat liberation, LGBTQ+ rights, disability rights, and racial justice, but a catchy, feel-good cliché that celebrates bodies who, historically, have always been celebrated. The point of body positivity can’t be about assuring thin-spectrum white women that they’re 'not fat' or issuing out congratulations for 'daring' to be a size 12. Sure, this might widen the circle of 'acceptable' bodies out a few notches, but it does very little to empower those who remain outside the circle – those who are still denied access to safety, health care, respect, cultural value, political voice, and basic humanity on a daily basis."

Sheehan's thoughts on body positivity are perhaps best summed up when she talks about a quote from author and activist Virgie Tovar, though.

"We walk around in a culture that's deeply immersed in sizeism, homophobia and fatphobia and racism and ableism and ageism. It's so thick. I think of it as the air that we breathe. So can we stop breathing air? No. Can we learn how to be critical about the things and messages around us? Can we learn to sift through our own messed up thinking? Absolutely," Tovar said in a 2012 video.

Sheehan has made a point through her Instagram to empower those people outside the circle — and that's exactly what makes her social presence so vital. Below Sheehan talks about her following on social media, and the responsibility she feels to keep the conversation about fat acceptance and body positivity going.