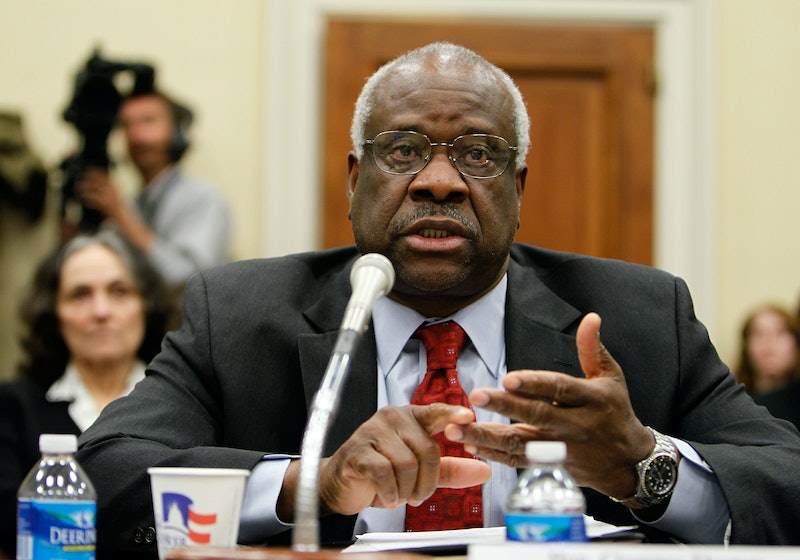 On Tuesday, the Supreme Court upheld one of two provisions of an Indiana abortion law. In a concurring opinion, one of the court's more conservative justices made an extreme claim about the provision of the law that the court didn't take up, and reproductive rights supporters found it pretty disturbing. Justice Clarence Thomas linked birth control to eugenics, and according to Think Progress, that fringe idea seems to be moving closer and closer to the mainstream.

"The use of abortion to achieve eugenic goals is not merely hypothetical. The foundations for legalizing abortion in America were laid during the early 20th-century birth-control movement," Thomas wrote in his concurring opinion. "That movement developed alongside the American eugenics movement. And significantly, Planned Parenthood founder Margaret Sanger recognized the eugenic potential of her cause."

What Thomas is referring to is the oft-repeated claim among anti-abortion advocates that Planned Parenthood founder Margaret Sanger was a major proponent of the American eugenics movement, and that she espoused all the racist ideology that came with that movement, as Imani Gandy explained in a piece for Rewire.news. At its most virulent, this movement wanted to eradicate those of "undesirable stock," according to Nature. That term often was used to refer to people of color, disabled people, or "feebleminded women" — women deemed overly promiscuous.

As Gandy noted, this was a truly dark period in American history; after all, forced sterilization policies in California gave the Nazis inspiration for their own programs in Germany. However, the ideology behind eugenics wasn't always so bold-faced. In fact, Gandy argued that while Sanger's writings do betray her paternalistic attitudes towards people of color, she was actually fairly progressive for her time.

Most important for debunking Thomas' argument, though, is the fact that Sanger's dedication to making birth control widely available came out of her feminist beliefs that women deserved the freedom to seek out their own sexual gratification.

There's no doubt that the birth control movement did cross paths with the eugenics movement, as NPR noted. But eugenics did not inspire Sanger's work, and she actively worked against the Nazis by joining the Anti-Nazi Committee in 1939. Clearly, she was a complicated individual. Still, misreading Sanger and quoting her out of context have become standard among abortion opponents, including Housing and Urban Development secretary Ben Carson and, now, Thomas.

Thomas' "screed" against abortion, as Slate referred to it, was certainly alarming in the way that it explicitly linked people who want abortions to eugenicists. It's notable that his concurring opinion also used the phrase "birth control" dozens of times, implicitly linking contraception to eugenics as well. Slate noted that if you follow Thomas' argument, it's the people choosing to get abortions who are painted as the villains. Despite the fact that Thomas relies on some faulty history to make that argument, there are doubtless many people who will read his opinion without recognizing these flaws.