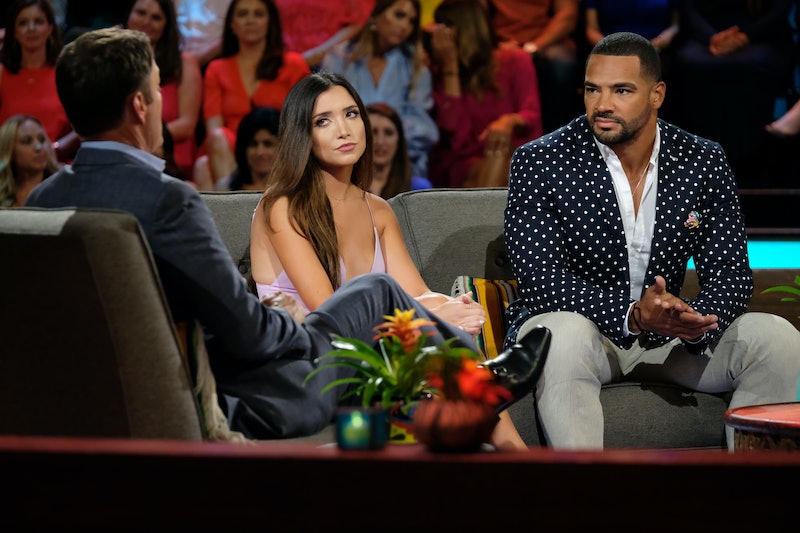 Clay Harbor and Nicole Lopez-Alvar may have started out as one of Bachelor in Paradise's strongest couples, but by the end of Season 6 the two decided to part ways when Clay wasn't ready to get engaged or to tell her he loved her. Now months later, Clay has finally explained why he didn't contact Nicole after Paradise, despite saying at the time that he'd be interested to see what their relationship looked like in the real world.

The drama began on Oct. 10, shortly after John Paul Jones posted a photo on Instagram that referenced his relationship with Tayshia. "Some things just take time," JPJ wrote in the caption, referring to how he and Tayshia got back together after filming was over. That's when Clay decided to weigh in on the matter, according to Us Weekly. "I learned engagements aren’t supposed to,” he wrote in the comments section, a subtle dig at how his relationship with Nicole ended because he wasn't ready to propose. Initially, the remark appeared to be made in good fun, with Nicole even joining in on the joke, stating that “not everything can take as long” as Clay’s “gym sessions."

However, things quickly took a turn after one Instagram user insulted Nicole, calling her a "moron." The former BiP star took to the comments section once more to explain how Clay's hesitancy to commit was confusing, especially given that he had applied to be on a reality dating show "where the sole purpose is to find The One." She then accused Clay of leading both her and Angela on, claiming that he only joined the Bachelor franchise "for clout to see if he’d gain 15 minutes of fame and get back into his failed NFL career." Nicole additionally called him out for never contacting her after the season ended.

And while Clay claims he didn't want to respond to those remarks, he has since taken to Twitter with a follow-up statement. “I wasn’t even gonna respond to the comments but what I will say is my failed NFL career was 3 times the average career length,” Clay explained via Notes app screenshots. “I’m extremely proud of the work I put in to accomplish that goal of playing NFL football for the better part of a decade."

He continued, making a point of addressing Nicole's criticisms of him never getting in touch with her post-BiP. “I was going to reach out but after finding out she had a boyfriend a couple of weeks after the show, I decided not to,” he claimed in a follow-up tweet. “I was happy for her and didn’t wanna intrude.” He acknowledged that while he realizes that show's purpose is to accelerate relationships, he didn't feel as though his relationship with Nicole was ready for that next step and refused to be pressured into such a big decision like an engagement.

Clay concluded by once again discussing his relationship with Angela and how he broke things off with her because he didn't want to lead her on or waste her time. Nicole has yet to comment on his latest series of tweets, but if the past week is any indication, these two won't be reconciling anytime soon.