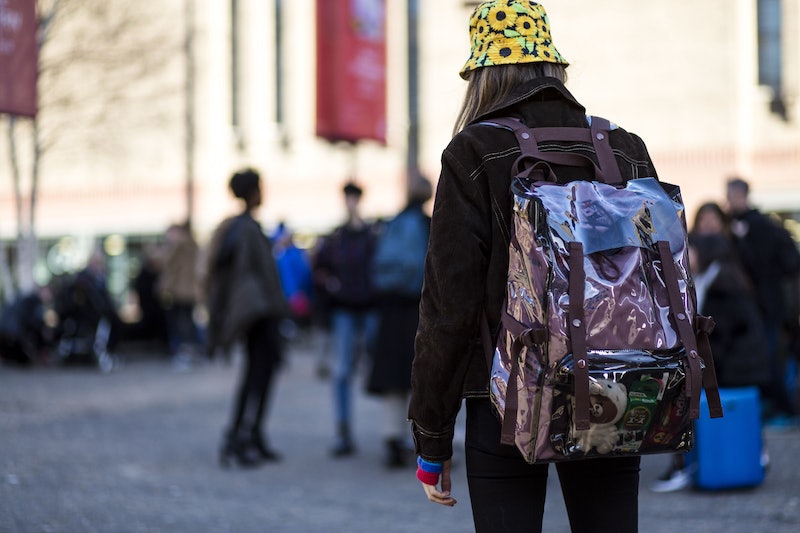 When students at Marjory Stoneman Douglas High School return from spring break, the district will begin enforcing a new policy. Following the deadly February shooting at the Parkland, Florida, school, student backpacks will have to be clear. And that change may mark just the start of how schools could transform without gun control reform.

Along with see-through backpacks, Parkland students will be provided with ID badges that they'll be required to keep on them at all times. The school is also weighing the possibility of installing metal detectors and/or using metal detection wands at various entry points.

After the Feb. 14 shooting, the Parkland high school has dealt with other troubling incidents. The shooter's brother was recently arrested on charges of trespassing on school grounds, and The New York Times reports another two students were arrested on the same day for bringing knives on campus.

School-mandated clear backpacks are not unheard of. In 2017, a district in Georgia changed their policy to require clear backpacks for all elementary students after guns were brought on campus. A middle school in Oklahoma required its students to start wearing clear backpacks at the start of the 2017 school year, citing cases of students bringing prohibited items to school.

Regardless of student opinion, if gun control reform makes no headway in Congress, it's likely more such changes are coming nationwide. Schools invested in protecting their students (which one hopes describes all of them) will be looking for alternative ways to keep their populations safe.

And gun rights advocates have some ideas about that.

Perhaps most notably, the National Rifle Association (NRA) has unveiled a trademarked program — "National School Shield." According to its website, National School Shield's mission is "to protect our children." To that end, the NRA's program provides a "suite of available tools and resources schools and affiliated stakeholders can utilize."

The process begins with an assessment of a school's particular vulnerabilities, with an individualized plan for each school mapped out afterward. Their assessment and subsequent school security plan will cover "best practices in security infrastructure, technology, personnel, training, and policy."

In response to a question on its FAQ page about whether National School Shield supports armed guards on campus, the organization answers that it "believes every option should be considered," including "trained school personnel." Ostensibly, that means armed teachers and other staff.

The NRA is somewhat vague on offering details about what other aspects of its program — specifically, the infrastructure and technology portions — would entail.

Jane Coaston at Vox outlined other people who have called for making schools "at least as secure as airports," in the words of Fox News contributor Geraldo Rivera. Fox News host Sean Hannity echoed that popular conservative sentiment, saying on his titular program, "you can’t tell me that if we can secure the airport, secure our planes, secure the Oscar’s red carpet and everybody else that wants security, that we can’t do it for our kids."

Securing schools the way we do at airports could include widespread use of metal detectors and a major increase in armed personnel. Another regular staple at airports are bomb-sniffing dogs. Still, all of this ignores the fact that TSA failed to catch 70 percent of weapons and explosives during a 2017 security test, Forbes reported.

Wayne Allan Root, an author and former Libertarian Party candidate, has floated the idea of using armed military drones on campus, to be put to their original purpose in the event of an active shooter. Who would have ultimate control over the drones' deployment remains an open question.