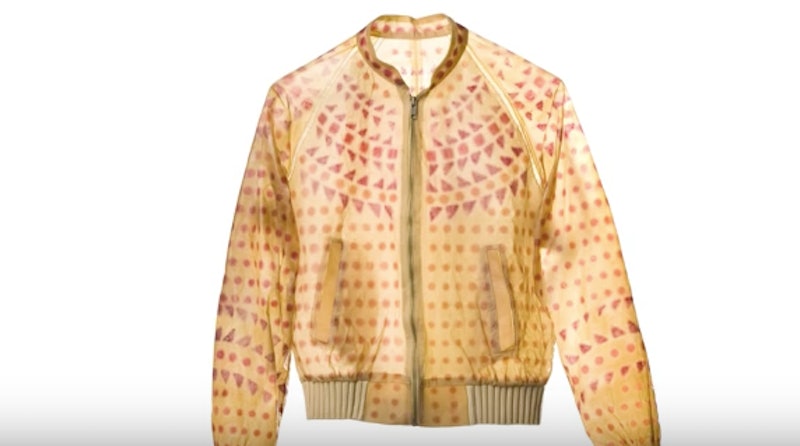 If you don’t like mushrooms, it might be because you haven’t tried them yet in dress or jacket form. Believe it or not, mushrooms can now be fashioned into flexible leather-like clothing, purses, pants, and even durable furniture and building bricks for a cleaner, more sustainable planet. Phil Ross and his team at the San Francisco-based MycoWorks, a group of engineers, designers, and scientists, are developing products inspired by fungi's lattice-like “roots," called mycelium. According to the MycoWorks website, mycelium are carbon-negative and can also be naturally dyed any color, so your mushroom dress or house can be bright purple, fuchsia, or Cerulean blue if tan seems too subtle.

According to the website of Italy's Mogu agency, which specializes in developing and scaling-up a range of mycelium-based technologies for the production of naturally-grown biomaterials and products, mushroom-based fabric can be tweaked to be as hard as enamel and shell-like or as soft and porous as a sponge, depending on the amount of light, humidity, exchange of gas, temperature, and types of “food” the mushroom is given (hemp, straw, etc.), rendering it as the ideal creative material for whatever you envision forging.

Mogu has proven that fabric created from mycelium is non-toxic, waterproof, and fire-resistant. It can be as thin as paper for dresses and lamp shades, or incredibly thick for heavy-duty items, and in both cases, the end result is remarkably flexible and strong.

Ross told Modern Luxury magazine, "Mycelium bricks can also be composted. Or fed to livestock. Or even used to brew a nutritional tea... Mycelium can be grown in almost any kind of agriculture waste, including sawdust and pistachio shells." He explained that MycoWorks inoculates it with the live culture of the reishi mushroom, which will feed off of anything, unlike other pickier mushrooms. The mushrooms grow together within the material, which can be configured into any shape, forming natural polymers that adhere like glue. The material is then baked to kill the organisms, so that if it ever got wet, mushrooms wouldn’t start sprouting again.

Grossed out at the idea of wearing fungi all day long? It's actually a lot more sanitary than you might think. People with sensitive skin will love that mycelium mushroom material is naturally anti-microbial (unlike other textiles, which are only made to be anti-microbial through an expensive process), according to the National Center for Microbiology, so sweaty workout gear and hot-weather clothing won’t create rashes or discomfort. In the production of mushroom fabric, no toxic chemicals or fertilizers are used and very little water is necessary, so the fabric is a game-changer for the environment. According to the World Wildlife Organization, a cotton T-shirt typically requires 713 gallons of water to produce because of the amount of cotton required, versus 3 gallons of water to create a dress three times the size of a T-shirt, according to NEFFA. And it’s organic.

Mycelium requires only a 3 to 4-week period to grow in full. So rather than extracting our materials from the ground, it's possible to grow and easily replenish them in a lab. According to NEFFA, the mycelium modules enable us to effortlessly repair clothing without altering how it looks or is shaped. And the fact that mushrooms are biodegradable is both convenient and environmentally friendly. When you're done with the garment, you can simply compost it.

In 2016, Dutch designer Aniela Hoitink, in conjunction with Myco Design Lab — which is a collaboration between the University of Utrecht, Mediamatic, and Officina Corpuscoli— created a gorgeous dress made only from mycelium discs, which she called MycoTex. It was placed on display at a museum in the Universiteits museum in Utrecht. She first used petri dishes and supplied nutrients to mushroom roots, which grew into discs. The discs then overlapped to form a thin fabric that was easily shaped into a dress and built three-dimensionally on a mannequin without any sewing. The dress could be specifically fitted to the wearer’s tastes, feature unique patterns, have the garment length adjusted, have elements such as sleeves added, and was created by growing precisely the right amount of material — which completely eliminated tailoring waste.

The potential for organic water repellence alone seems promising for athletic-wear, boating, fishing, winter sports, and inclement weather, but those aren't the only areas with opportunity to expand. Microsoft Research artist-in-residence Erin Smith created her own wedding dress from tree mulch and mycelium to show that wedding dresses can be far more sustainable and affordable. Smith told The Guardian that for her wedding dress, she used mycelium mixed with agricultural waste, and after her wedding, she composted it in a garden. Smith wanted to grow her own dress because she didn’t want her wedding to be dictated by tradition or to wear a dress that would sit in her wardrobe for years.

London-based designer Suzanne Lee is the director of Biocouture, a company specializing in microbial-based fabrics, including fungi, and works with various brands in both the sportswear and luxury segments. In addition to mushrooms, Lee utilizes algae, bacteria, tea, and yeast. In an interview with Britain’s Dezeen magazine, Lee said, "I can imagine that we will eventually move towards the material itself being living while it's on you, and having a direct relationship to your whole body in this happy micro-biome environment and perhaps diagnosing and treating, nourishing in some way the body surface so becoming part of your wellbeing."

Lee also works as the CCO of Modern Meadow, a company that specializes in replacing leather with more sustainable bio-fabrics, and she founded an international conference on the topic of this new movement, Biofabricate.

At the first Biofabricate conference in 2014 on biomaterials was Ecovative, a small company specializing in mushroom-based alternatives to everyday materials such as Styrofoam. The company has created sustainable packaging, soundproofing material, buoys, and floating rafts. And for gorgeous eco-friendly purses, Muskin is one such fabric and further proof that we have viable substitutes for animal leather and suede. According to news outlet Grist, cattle require massive amounts of resources: water, land, food, labor, and time. Yet science website Science Friday points out that mushroom/mycelium products can be as strong as deer skin.

How To Make It Yourself (Really)

Ecovative Design enables you to purchase their GIY Mushroom® Material, (GIY = Grow-It-Yourself) and try your hand at creating something with the material of the future. These GIY kits are a mixture of mycelium and corn stalks and husks, and you’re provided with a video tutorial on how to grow your own.

In fashion, our waste and consumption rate increases with each passing year as clothes become increasingly more affordable and disposable. We rarely tailor or repair clothing anymore. Imagine if we can all eventually grow our own clothing — and thanks to mycelium, we are now growing shoes, too.

The Future Of Things Made From Mushrooms

Another innovator using mycelium is lighting designer Danielle Trofe, who dubbed her latest collection called MushLume from Ecovative’s materials. Also, mycelium’s natural antimicrobial properties are a benefit, as silver nanoparticles are incorporated into fibers like nylon and hospital curtains because of silver's antimicrobial properties, but come at a cost. According to the nonprofit Beyond Pesticides, “Many consider silver to be more toxic than other metals when in nanoscale form and… these particles have a different toxicity mechanism compared to dissolved silver. Scientists have concluded that nanoparticles can pass easily into cells and affect cellular function, depending on their shape and size.”

As a result, Hoitink sees a great potential for mycelium beyond clothing, including antimicrobial curtains in hospitals or moist absorbent textiles for old houses, since mycelium is as equally efficient as silver as an antimicrobial agent. Mycelium can replace synthetics and petroleum-based products too.

While experts say that mushroom-based clothing could be a big part of our future, there are drawbacks to the material — depending on your unique perspective. Mycelium-based clothing lasts one or two years before it weakens, loses its shape, and falls apart; so if you really love a particular piece of clothing, you may just have to grow another in a few years. What makes it so sustainable is the fact that it's thoroughly compostable, much like your dinner salad.

There's also the small fact that some people have an inherent distaste for fungi and bacteria. “People tend to disregard fungi because they associate them with disgust,” Maurizio Montalti said in an interview with Pratt Institute's BK Accelerator blog. Montalti works with mycelium and founded the company Mycoplast in 2015, which uses mycelium for a diverse array of major products that encompass construction, automotive, nursery, packaging, and horticulture.

Mushroom design is slowly catching fire, but needs more exposure. To that end, ARTIS Micropia, an interactive museum in Amsterdam, created an exhibit called "a FungalFuture." The museum’s microbiologist, Jasper Buikx, in an interview with VICE, said “Fungal diversity is enormous, possibly containing millions of species, of which we now only know about 100,000. And within a single species of fungus, there sometimes is more genetic diversity that there is between a man and a fish. This means the sky is the limit in terms of how we can experiment with mycelium production in terms of durability, strength, flexibility and the material's various inherent properties.

As wild as it seems, it is possible that someday we could be surrounded by magical mushrooms in all of their myriad forms: as our houses, furniture, clothing, shoes, statues, umbrellas, curtains — and, of course, as pizza toppings.

More like this
The Best Heels For Bunions, According To A Podiatrist
By Margeaux Baulch Klein and Maria Cassano
Walmart's Pre-Black Friday Sale Is On — And Here Are All The Cool Things Worth Buying
By Kate Marin
Cyber Monday 2022 Is Around The Corner. Here Are The Deals To Expect
By Dominique Norman
The Best Black Friday 2022 Fashion Deals To Shop This Year
By Dominique Norman
Get Even More From Bustle — Sign Up For The Newsletter