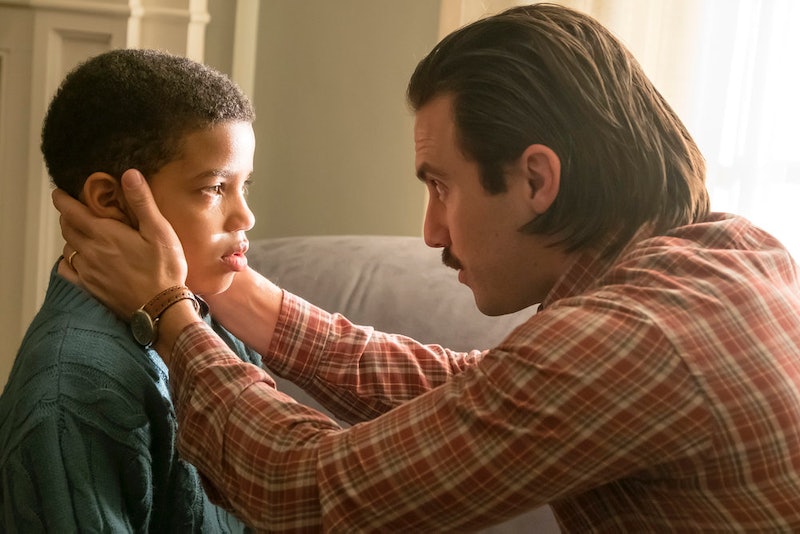 There’s been a huge cloud looming over the Pearson family since the beginning of This Is Us: Jack is dead. However, viewers like you and me don’t know, oh, basically anything about the circumstances that surround his passing. Jack Pearson, patriarch of the century, is dead, and I have to live through that every week when I watch the show. That being said, I’m determined to find out how Jack died on This Is Us, even if the show won't tell us.

In January, creator and executive producer Dan Fogelman told Vulture that viewers wouldn’t get the big reveal anytime soon. First, we’ll see the family dynamics, then how the family reacted to his death, “and then, much later, how, and later you’ll see it [happen],” he said. A week later, Fogelman expanded on this point in an interview with Entertainment Weekly and said:

"There’s still — and there’s going to be for some time — a lot of unanswered questions. What was going on in their marriage whenever this happened? How did it happen? Those questions aren’t going to be answered for some time. It’s something that, like many of the great tragedies in our lives, might not be talked about all the time or easy to talk about."

That's all fine, Fogelman, but I’m not a woman who takes “no” for an answer. The writers of This Is Us have dropped “how Jack could have died” breadcrumbs on the show, and I’m here to take a look at them and figure out which could be red herrings and which could actually mean something.

Could Be A Clue: The Drinking

In the beginning of the season, Rebecca confronts Jack and tells him that he needs to cut his drinking (the kids are about 8 at this point) or else — she’s pulling all the weight in the family and that’s not something that’s going to continue to happen. In the Valentine’s Day episode of This Is Us, Jack is frustrated after a fight with Rebecca and starts back on the bourbon. Jack’s drinking again could have led to his death, whether through an accident or medical issue.

Probably Not A Clue: The Airplane Thing

I’ve read some theories that say Jack dies in a plane crash (or in 9/11, which doesn't make sense for the timeline, but I digress), which is why Kate is such a bad flyer and why Kevin trashed all of his model airplanes after Jack died. Personally, I think Kate is a bad flyer not because a plane killed her father but because many people are not comfortable on airplanes. Kevin probably destroyed his airplanes not because they are machines of death, but because, as he said himself, model airplane-building was the only time he ever got solo with Jack, and seeing all of them was a stinging reminder that his dad was gone.

Could Be A Clue: The Kate-Can’t-Talk-About-It Thing

Kate and Toby are engaged to be married, but she sure can’t share anything about her dad. She got a little bit out when she was explaining her football bond with Jack, but she absolutely couldn’t talk about how he died, which suggests that it was sudden and traumatic. Speaking at least from my own experience, when a family member has a prolonged illness, one can take steps to come to terms with it. Even Beth, Randall’s wife, said that both she and Randall were not prepared for their respective fathers’ deaths. Jack’s death must have been so sudden that Kate has blocked it from her brain, even 15-or-so years later.

How did Jack Pearson meet his maker? Frankly, I have no idea, but I’m going to continue to sift through the clues to separate the fool’s good from the real stuff (at least in my eyes) on This Is Us.