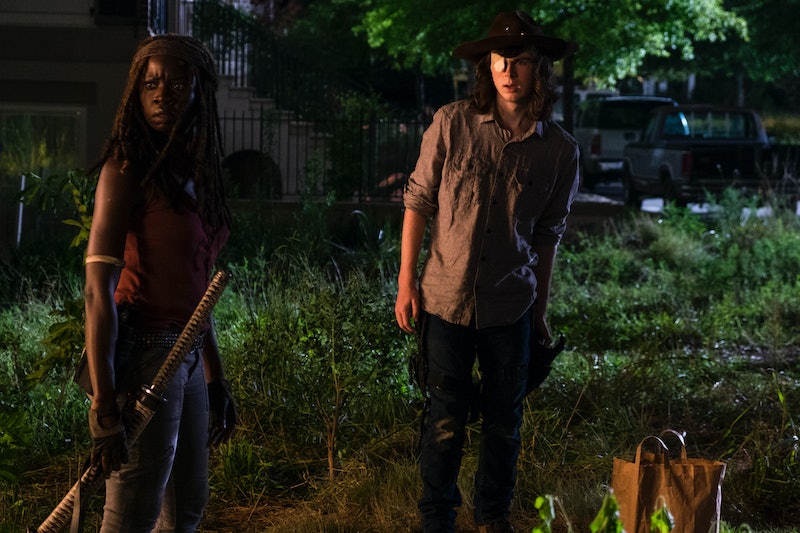 The all-out war on The Walking Dead between the Saviors and "AHK," also known as Alexandria, the Hilltop, and the Kingdom, has favored Team Rick for most of Season 8. However, as the Dec. 10 midseason finale looms closer, so does the dread that something will go horribly, horribly wrong. These clues about The Walking Dead Season 8 midseason finale foreshadow a lot of hurt and sorrow to come.

According to AMC's official episode description, "Maggie and Jesus plan the final stages of the war against the Saviors." Talking Dead promised that the episode would end with a moment fans wouldn't be able to stop talking about. Will it be a horrific death? An alien invasion? The arrival of the Whisperers from the comics? There's always a lot to talk about when it comes to The Walking Dead, so the bar for surprise is set pretty high.

The sneak peak Episode 8 clip aired on Talking Dead reveals that Eugene does get the intercom back up, it seems, or some other method of communication. Michonne and Carl look on in horror as Negan says, "You may be wondering why your lookouts didn't sound the alarm" and proceeds to tell them that he and his people have taken prisoners, knocked them out, and that he's looking forward to apologies and sacrifices before he takes Rick out for good. "They got out," whispers Michonne. And who knows where Negan and his followers are now?

As for the other official midseason finale promo, here are the clues it has to offer:

Yet. Who knows what she and her weird garbage people will decide.

2. They're Planning An Ambush

This is going to be a long finale, as the promo features action scenes in the daytime and the nighttime. The trucks moving indicate another attack, one that likely takes place after the above Rick and Jadis fight.

3. They're Talking About The Sanctuary

"There's no more supplies going in," Maggie says, "but there have to be people." That sounds like something you'd say about the Sanctuary, which has been surrounded by a hoard of walkers for the last few episodes. Daryl's line indicates that the breach was successful and that they should move in.

This tree in the road resembles the first time the Saviors trapped Rick and his group into meeting Negan. That's not a good sign at all.

Not only does Maggie also suspect the fallen tree is a trap, but who is that guy in the back seat? He's a dead man riding if we ever saw one.

6. Alexandria Is Also In Danger

Is Carl evacuating the Safe-Zone? He tells the survivors to escape on foot, which is never Plan A. Maybe this happens after they realize that the Saviors have escaped the Sanctuary. Did they make it back to Alexandria while the Hilltop was on the road trying to ambush them? This is a disaster!

Also, is he packing bombs?

Carol sure isn't running from the ghost of Shiva. Either she joined the fight, or this gated community is in danger too.

Is that Eugene? Yikes. The two of them left to go on a mission, and it looks like they don't make it too far. In an interview with Yahoo News, actor Josh McDermitt promised a lot of "surprise" in the finale. "I think some people might be excited," he said, and "some people might be really sad. In terms of Eugene’s storyline, there’s going to be some surprise there. There’s going to be some surprise in other areas, as well."

Whatever happens, it looks like fans are going to be on the edge of their seats and anxious for The Walking Dead Season 8 to return before the episode is even over.