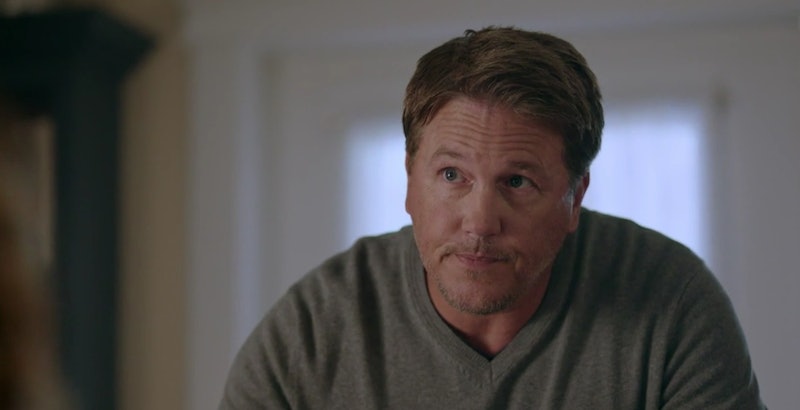 After killing Midge during Riverdale's production of Carrie, the Black Hood made contact with Betty after a long radio silence following the death of school janitor Mr. Svenson, who was believed to have been the Black Hood. The will of the Black Hood holds strong over Betty, as Betty delivered the Hood's next victim to him.

Betty brought him the man whom spent all of Season 2 claiming to be Chic Cooper — but who Betty recently learned was a con artist merely pretending to be her brother. When Betty returned home, leaving Chic running from the Black Hood in the woods of Riverdale, she discovered that her father is absent and told Alice that he was searching for Betty. Betty's glance communicates everything she's thinking — that there's reason to believe that the man in the black hood whom she just delivered the false Chic to could be her own father. If you look at the hint, it all starts to make sense that her dad is the Black Hood.

Since Chic's initial arrival in the Cooper household, Hal showed a deep hatred for the boy who was presumed to be his son. However, after learning that "Chic Cooper" was only pretending to be Alice's lost son, it would makes sense that Hal would use his identity as the Black Hood to dispense of this fake Chic once and for all. Besides, how else would the Black Hood know that Chic was tied up in the Cooper's basement if he wasn't Hal?

He Has The Right Build

While there are a lot of teens that could be capable of murder in Riverdale, the Black Hood sports the body of a tall adult man with distinctive green eyes. Hal Cooper is a tall adult man with distinctive eyes that aren't quite as green as the Black Hood's, but not far off. Of all the tall men in Riverdale who could be the killer (Sheriff Keller, Claudius Blossom, the aptly-named Tall Boy) it's Hal who seems to fit the Black Hood's profile the most.

Hal Could Be Killing For His Daughter

Early in the Black Hood's reign of terror, the killer addressed a letter to Betty Cooper saying that her Jubilee speech in the Season 1 finale inspired the Black Hood to become a vigilante. Hal Cooper was in attendance at that speech, and could be trying to help his daughter in his own twisted way. Hal being The Black Hood would also explain the killer's obsession with Betty. How else would The Black Hood know so many of the Cooper family secrets, including Betty's Nancy Drew code and Polly's barn residence?

While his role in the local Riverdale media empire hasn't been commented on much in the series, Hal was the owner and editor-in-chief of The Riverdale Register prior to Hiram Lodge coming into town and purchasing it. The Black Hood has used the Register multiple times to scare Betty and the town, including digging up a clipping from Alice Cooper's years as a Southsider and delivering a message to the Register. Could Hal be using his print media connections to terrorize the town?

The Coopers Have A Dark History

The history of Riverdale is dark, and the Cooper family plays a major role in that — especially if you consider that they split off from the powerful Blossom family. It was revealed earlier in Season 2 that Betty's grandfather Louis Cooper was part of the group of men that buried an innocent man alive, believing him to be the Riverdale Reaper. Perhaps that sense of vigilantism was inherited by Hal Cooper himself, who is taking on his father's mission of trying to clean up the town of sinners. We've already seen Betty give into her darker impulses and Alice had gone so far as to help kill someone for "Chic." Is the Black Hood just an outlet for Hal Cooper's dark side?

It's possible that Hal Cooper is simply one of many Black Hoods, using the role of serial killer to commit the crimes that he could never commit if he was just Hal Cooper. It's even possible that Hal didn't become the Black Hood until he needed a way to get rid of Chic and that the first Black Hood really was Joseph Svenson. Whatever the truth is, Hal will have some explaining to do next time he and Betty talk.