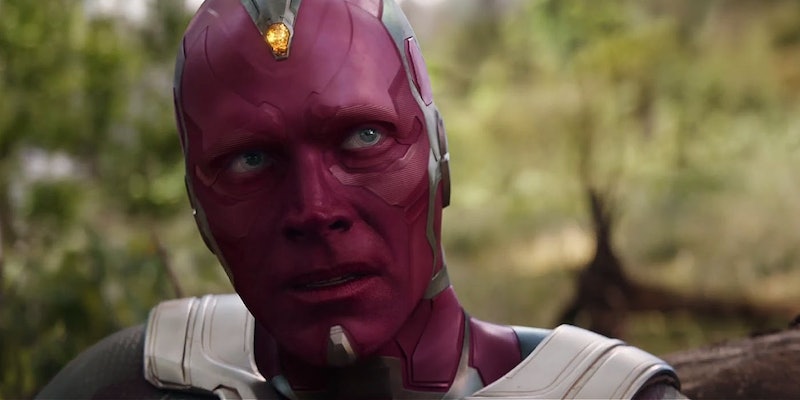 One of the most exciting aspects of Avengers: Infinity War has to be Vision and Scarlet Witch's romance, and fans everywhere are dying to know what happens to the duo's relationship. Sadly, though, the heroes might not get a fairytale ending, because there are so many clues that Vision could die in Infinity War. The movie's villain, Thanos is on a mission to collect every Infinity Stone, and one of them happens to lie in Vision's head. As Paul Bettany, the actor who plays Vision, tells reporters on Infinity War's Atlanta set, "There’s some really bad dudes who want the stone from my head, and that’s a problem for Vision."

During a break from filming, Bettany and Elizabeth Olsen — who plays Scarlet Witch, also known as Wanda — explain why Thanos threatens the Avengers more than any villain before him. "I think he’s a real d*ck," Bettany says, laughing. "I just found out what it means to be human and now this Thanos guy... I think for everybody, the stakes are so high that I think that it’s —" Olsen chimes in, "As bad as bad can be."

As for how Bettany's character discovered what it means to be human, a few different theories prevail. When E! News published on-set photos from Infinity War portraying Vision looking more like Bettany himself than a superhero android, Cinema Blend conjectured that the photos could either be a dream sequence or that Vision shape-shifts into a human to prevent Thanos from finding the Infinity Stone in his forehead. Then, the first trailer for Infinity War revealed a human-looking Vision, and a blog on Screen Rant also conjectured that Vision found a way to shape-shift to appear more human, hiding from Thanos.

As for exactly how Vision changes his appearance in Infinity War, Bettany jokingly offers a few different explanations. "Well, you either travel to different Mardi Gras around the world or Halloween... or you discover the ability to change your appearance with nano-technology," the actor says. Even though Vision changes his appearance in the upcoming movie, the android still has to grapple with what might happen should Thanos get ahold of the Infinity Stone that allowed him to have certain powers in the first place. "That’s a very big question and... One that troubles Vision and Wanda a lot. I don’t know what to do about that," Bettany says.

Vision is the only superhero who has an Infinity Stone actually implanted into his or her body, and so while Thanos' mission to wipe out half of the universe with the six Infinity Stones burdens every superhero, the fact that Vision basically is a stone means he presents an even greater target. These stones, which include the Space Stone, the Mind Stone, the Power Stone, the Reality Stone, the Soul Stone, and the Time Stone, have been mentioned throughout various Marvel movies, though you might not have always known it. For instance, you might know of the Space Stone as The Tesseract from Captain America: The First Avenger.

While Doctor Strange holds the Time Stone in the Eye of Agamotto pendant, according to Collider, Vision is the only superhero who actually has an Infinity Stone, in this case the Mind Stone, inside his body. In the first trailer for Infinity War, you can see Vision — this time in his colorful android suit — pinned to the ground in anguish as a giant claw reaches into his skull to extract the Infinity Stone. Whether that means Vision dies or not is unknown.

But even if Vision does bite the dust in Infinity War, he'll have died after achieving a goal he had ever since he first appeared in Avengers: Age of Ultron. "I think that Vision’s been on this quest to understand what being human is and I think Scarlet Witch [has] in a large degree helped him figure that out and what love is," Bettany says. Unfortunately, with humanity comes mortality, and Vision's pursuit to become a human might backfire and cause the android to die if Thanos gets the Mind Stone from his head.

More like this
These 25 International Horror Movies On Netflix Prove Fear Is A Universal Language
By Bustle Editors
A New Scooby-Doo Movie Confirmed Velma Is Gay & Twitter Is Pumped
By Radhika Menon
Everything You Need To Know About ‘Black Panther: Wakanda Forever’
By Bustle Editors
Alan Rickman's Diary Reveals Why He Considered Leaving 'Harry Potter'
By Darshita Goyal
Get Even More From Bustle — Sign Up For The Newsletter