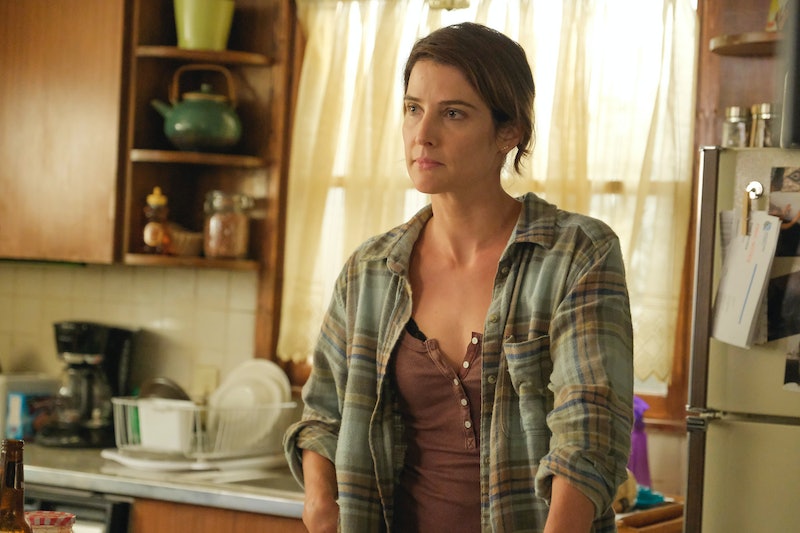 Stumptown focuses on a war vet with PTSD who moves back to Portland, Oregon to become a private investigator and care for her brother Ansel (Cole Sibius), who has Down Syndrome. She's smart, sassy, and incredibly complicated, so much so that you might think that Cobie Smulders' Stumptown character Dex Parios is based on a real person. But while her story seems incredibly life-like, the character is actually totally fictional.

Dex and the Stumptown series as a whole are actually based on the Stumptown graphic novels by Greg Rutka. The first book in the series was released back in 2009, and Dex was immediately established as a headstrong but troubled protagonist — a dichotomy Rutka found challenging and incredibly rewarding to write.

Smulders was also immediately taken with Dex and jumped at the opportunity to play such a "fully realized woman" who defies explanation.

"She’s unlike any character I’ve ever read. It was really exciting to me. I find her very hard to describe, and it’s one of the reasons I’m drawn to her," Smulders told Entertainment Weekly. "She’s a bit of a mash of everything: she’s very funny, she’s very closed off, she’s very determined, she’s very flighty, she comes from this tough military background, and she’s unable to hold down anything steady, yet she has this big responsibility of taking care of her younger brother."

Smulders added that Dex's many contradictory qualities made her even more fascinating to portray, saying, "It’s this messy person who drinks and gambles too much and is not going to show up all the time, but at the same time, she’s inherently good and wants to help others and is quite righteous. It’s exciting to play a fully realized woman, and not just a couple shades of a character."

Dex has a plethora of issues she needs to work through. As an Army veteran who served during the war in Afghanistan, she still hasn't processed the things she experienced during her service and the PTSD she has because of it is causing some pretty big problems in her life. Stumptown will thankfully delve deeper into Dex's mental and emotional health and allow for growth in those areas, though Smulders warns there's a long journey ahead.

"At the moment she's not interested in being honest with herself," she told TV Guide. "We're gonna see her ride that wave of disappointing everyone, which she's excellent at. It will take some time to actually get to a healing place, but we'll see her dealing with her PTSD."

In the meantime, Dex is "self-medicating with sex, with alcohol, with gambling, with a lot of things and is really not looking at herself clearly," Smulders revealed during an interview with NPR. However, for all of Dex's issues and shortcomings, she does have a good heart, a quality that's heavily on display during the scenes with her brother.

"She's very honorable. She takes care of her brother and is his sole guardian, and it's really her and this boy against the world," Smulders added. "And on one hand, she is spinning out of control. But on the other hand, she's trying to be grounded and help those around her and in her life."

While it's clear that Dex Parios has many demons she'll have to face in order to recover and move forward, her Stumptown journey is sure to make that process engaging and perhaps even heartwarming to watch.