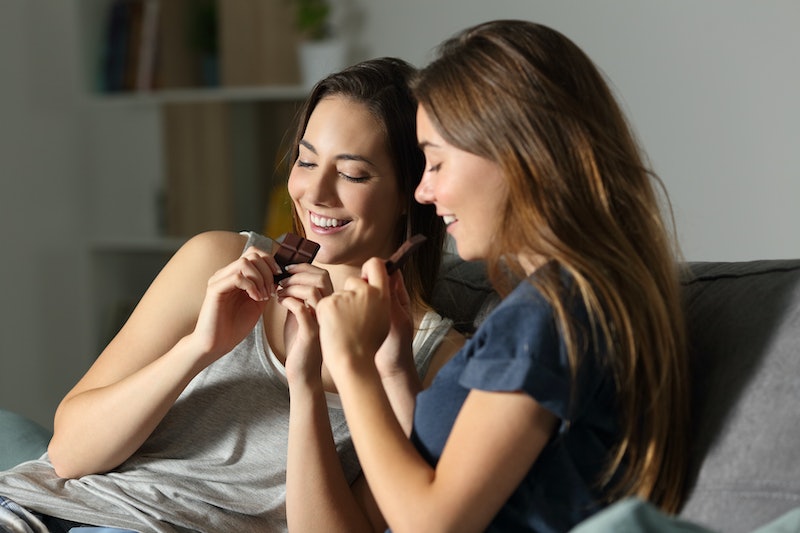 As if chocolate lovers ever need a reason to enjoy the sweet deliciousness that is chocolate, new research suggests that cocoa and dark chocolate contain surprising amounts of vitamin D2, a vitamin that can help fight the winter blues (among other health benefits). Researchers at the Martin Luther University (MLU) Halle-Wittenberg and the Max Rubner-Institut published their findings in the journal Food Chemistry. They found that chocolate in many of its delectable forms has significant amounts of vitamin D2, which is good news for people who like chocolate because, the researchers say, the human body needs vitamin D for strong bones and decreased risk of respiratory diseases.

"Many people do not get enough vitamin D,” nutritionist Professor Gabriele Stangl from MLU said in a news release. “The problem increases in the winter months when sunshine is scarce.”

According to Medical News Today, vitamin D is known as the “sunshine vitamin” because it’s produced by the body’s exposure to sunshine, but it can also be obtained through foods or supplements. Besides helping keep our bones healthy, says Medical News Today, vitamin D also supports our immune systems, regulates our insulin levels, and supports our cardiovascular health. Long winter days with less sunlight can decrease a person’s vitamin D levels, causing seasonal effective disorder (SAD) or the winter blues, according to the Mayo Clinic.

But chocolate lovers should still keep in mind that this new health benefit still comes with the same sugar content, so moderation is key. Plus, "you would have to eat enormous amounts of chocolate to cover your vitamin D2 requirements,” Stangl said in the news release.

That’s not to say you can’t add chocolate to your repertoire of other vitamin D-rich foods. According to the National Institutes of Health (NIH), other foods that are chock-full of vitamin D include lots of different fish, such as swordfish, tuna, or sardines. There’s also some dairy staples, such as yogurt, milk, and cheese, says the NIH, as well as orange juice fortified in vitamin D. And then there’s eggs and even beef liver, according to the NIH.

Although this might be less exciting for chocolate lovers who probably enjoy chocolate for its sweet taste, the researchers are looking into sugar-free foods containing cocoa, that provide the same health benefits without the risks of consuming the sugar, the researchers said in a news release. "Cocoa is an exciting raw food material because it contains additional secondary plant substances that, for example, benefit the cardiovascular system," Stangl said in a news release.

But until the researchers come up with that sugar-free option, regular ‘ole chocolate is a fine source of vitamin D. Whether you pair it with other vitamin D-rich foods or just enjoy it on its own, it’s still a way to add sunshine to your life — in more ways than one.

More like this
On TikTok, Tinned Fish Date Night Is The Latest Viral Food Obsession
By Emma Carey
10 Pumpkin Recipes That Are Way More Creative Than Pie & Lattes
By Rebecca Deczynski and Alexis Morillo
This Psychological Effect Might Be Keeping You From Hitting Your Goals
By Lexi Inks
UK Audiences Will Soon Be Able To Watch 'The Bear'
By Frances Stewart
Get Even More From Bustle — Sign Up For The Newsletter