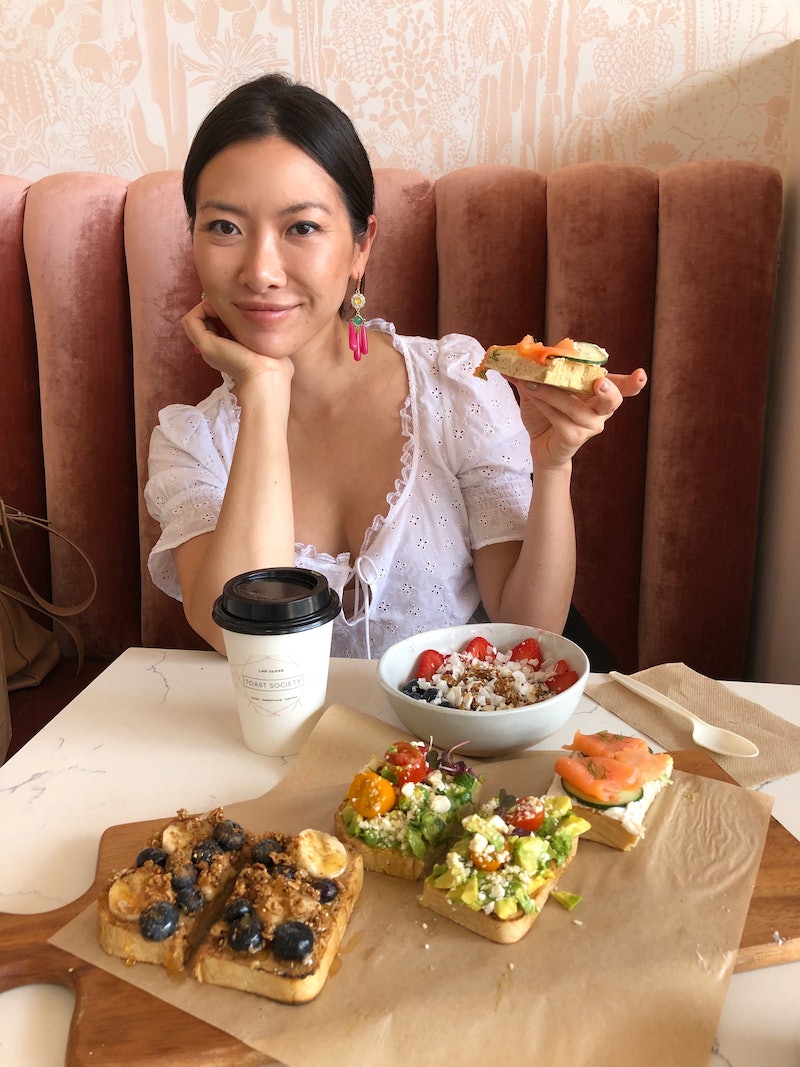 In Bustle’s Q&A series 28, successful women describe exactly what their lives looked like when they were 28 — what they wore, where they worked, what stressed them out most, and what, if anything, they would do differently. Cocokind founder Priscilla Tsai opens up about learning to balance her career and her personal life, building a brand from the ground up, and what advice she'd give her 28-year-old self.

Running a company requires balance. But when you're launching a new skincare brand, in a new city, on your own, at the age of 28, finding balance as an entrepreneur can be, well, a little tough. But once Priscilla Tsai, founder of clean beauty brand cocokind, figured out how to juggle both breaking into the skincare industry and creating a new life for herself, she realized she was capable of accomplishing any obstacle, work or personal. Now, cocokind carries over 30 different clean, natural products at accessible price points that can be found in stores nationwide. But getting there wasn't easy, and it certainly didn't happen overnight.

From developing her role as a young CEO to making friends in a new city, Tsai opened up to Bustle about the struggles of starting her own company at 28 and how it all came together in one precarious juggling act.

Take us back to when you were 28. Can you describe how you were feeling and where you were?

I moved to San Francisco when I was 26, so I was still relatively new to the city. At this point, I was a year and a half into starting cocokind. It was a really crazy time period for me. I was still balancing being a new entrepreneur, living in a new city, being single, and starting a company and working around the clock. I was having a lot of firsts in terms of being a new founder. It was exhilarating but pretty lonely as well.

But at that time, that first year and a half, there was just nowhere to go but up in terms of business. It was a really fun year, but I was still figuring out where I was personally and how that would all fit — balancing everything professionally with all the things personally, too.

Where were you working and what were you doing?

We had already moved offices once and we were making our products in a facility in Berkeley that we rented. We were getting started selling to stores and on social media, but it was a very early process for us. It was a very old school style of business — going to stores and dropping off samples or stopping by to try to get a meeting. It was the very early days of getting our products in stores, but we were very successful. We, thankfully, were already in 800 to 1,000 stores across the country. We hit the ground running after launching. At that point, I was doing demonstrations in stores three to four times a week, but at the same time, I was also making the products and doing other things in the company with very little help.

It definitely was what I had envisioned. I think my dream has gotten bigger since then, but it was my dream at that time. It was exactly what I wanted to be doing. Like I said, there was nowhere to go but up, and it was a fun time period for me to be carrying out that vision on a day-to-day basis.

I think as we’ve continued to grow, the vision has gotten bigger and bigger, and we’ve been really blessed. I feel really grateful to have the support of our customers to be able to say that. What started off as one vision has really morphed into a bigger and bigger vision as we’ve continued to grow. The perspective has widened since I first started the company, and that’s been really exciting for us.

What do you think was your biggest obstacle when you were 28?

I think it was being a new founder and balancing my personal life and living in a new city, too. My best friends were still in New York. At that time, I really put work over everything, but I was also balancing dating and being single. I met my now fiancé when I was 29. I was doing the whole dating thing in San Francisco which was really challenging. It was kind of my way of having a social life but still trying to find my group of girlfriends, too. I think that was the biggest challenge — not necessarily work, but fitting my personal life into the context of my work life.

Was there anything in your wardrobe or makeup bag that immediately brings you back to that time?

I think that was the year I was developing the matcha stick in our line, and it's now one of our best sellers. But it hadn’t launched yet back then. It was something we were testing out. Whenever I see a black tube without a label, it reminds me of that time period. There were so many iterations, and I was using it nonstop. That product was really specific to that time period.

My Matcha All Over Moisture Stick
cocokind

What was your go-to book or TV show?

Just being really honest, I think I started getting into Bravo — all of the Bravo shows pretty much. I talk about this now, but it’s definitely my way of unplugging. At the end of the day, I didn’t want to watch anything serious. People are like “Didn’t all the screaming stress you out?” and I’m like no. It’s the exact opposite. It made me feel like my life was normal and stress-free, so I think that was the start of my Bravo obsession.

Is there one piece of advice you’d go back and tell your 28-year-old self? Or something you’d tell her to do differently?

I think the biggest piece of advice would be to relax and not be so concerned with where I was in my life. When you’re 28, you start seeing a lot of friends get married or get engaged or start to have kids, and that started to become a really stressful process for me. I didn’t really think about the things that I was doing like starting a company and building it. Instead, I was seeing all the things that were happening around me that I wasn’t partaking in yet, and that was really stressful.

I think that caused a lot of anxiety for me on a personal level, and I think that’s something where, when you do have such an aggressive career and ambition, you also have to have a lot of personal goals you value. At the end of the day, I always value personal stuff over work. Even though I spent more time at work, it just led to a lot of anxiety. I think that’s something that happens naturally, especially if it is something you value, you need to just let go and relax and know it’ll happen at the right time.

Is there one moment in your career where you knew you’d “made it?”

I’d say there are so many moments over the past four and a half years of doing this that I’ve felt that. It could be the first time seeing our products on the shelf. That was really, really exciting for me. That happened early on. Then, through the years, there’s little moments, not one big moment. Whether it’s having a good team conversation or feeling fulfilled by seeing someone on the team grow, or someone saying they’re happy, or us being able to have the biggest launch day ever online. It’s a bunch of little moments for me not just one that signals, "Okay, you’ve made it."

What’s your biggest goal now, and how has it changed since you were 28?

I think when I was 28, I was short-term minded. For me, it was about working customer by customer to get awareness out there. Now that we’re off the ground and things are moving quickly for us, the goal is broader, which is to reach as many people as possible but to have a broader impact in the beauty industry. For me, there’s not a financial number or anything we’re working toward so much as we want to continue to make products and be a leader in the skin care and beauty industry as a clean, conscious, accessible skin care brand that makes people feel good. That’s the precedent that we want to make sure we’re setting in the industry.