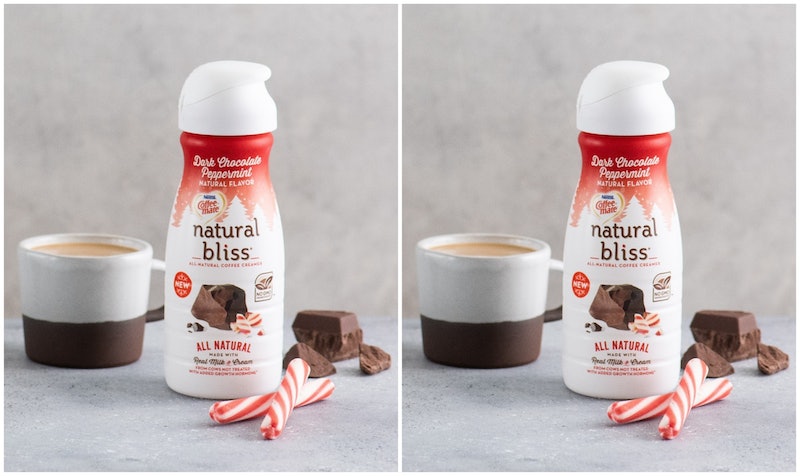 It might not be anywhere near fall yet, yet alone November or December, but many folks—myself included — are already gearing up for the colder months to kick in. That includes switching our coffee choices over from tropical-flavored, iced varieties to hot cups of joe spiked with warming spices or wintery coolness — and hey, wouldn’t you know it? Coffee mate just made that easier than ever. Coffee mate’s new natural bliss Dark Chocolate Peppermint creamer is set to arrive in stores in just a few short weeks. It will arrive around the same time as the Pumpkin Spice and Maple varieties we heard about earlier this week, and you know what? I’m not even mad about it. Last year, I started brewing autumnally appropriate coffee in August, and I did not regret it in the slightest. This year, I might even go so far as to start brewing winter holiday-adjacent coffee in August. Bring on the snow!

Coffee mate’s natural bliss Dark Chocolate Peppermint creamer combines milk and cream with cocoa and peppermint extract to make a rich and creamy coffee mix-in that mimics the flavor of a coffee shop holiday latte without, y’know, requiring you to actually go to a coffee shop during the holiday season. Available at retailers nationwide starting in September in 16-ounce bottles, this limited-edition offering will set you back around $3.29 per bottle.

It’s worth noting that the “chemicals are bad” argument is faulty; chemicals aren’t by default “bad” because everything is made of chemicals. However, if you prefer your coffee mix-ins to be made primarily of actual milk and cream, as opposed to milk derivatives, water, and vegetable oil, then the natural bliss line might be more your speed than the regular Coffee mate formula. The Dark Chocolate Peppermint flavor’s ingredients include nonfat milk, cane sugar, heavy cream, natural flavor, and cocoa — and that’s it. No more, no less. (That also means, though, that unlike the Peppermint Mocha variety, the Dark Chocolate Peppermint flavor is not lactose-free, so bear that in mind in case you’re sensitive to lactose or have other, dairy-related dietary concerns.)

In the event that Peppermint Mocha is your jam, though, rest assured that it’ll be back this year, too — along with a few other picks, both returning favorites and brand-new options alike. Coffee mate’s regular Pumpkin Spice creamer is already back on shelves now, in fact, with a natural bliss version arriving in September. Also coming in September are the Red Velvet and natural bliss Maple Almond Milk creamers, which promise to turn your daily cups of joe into maple-spiked or cake-flavored goodness. Most of these varieties are limited-edition, so snap ‘em up while you can; they’re all priced between around $2.69 and $3.29 per 16-ounce bottle.

Coffee mate’s natural bliss Dark Chocolate Peppermint creamer is similarly limited edition, so it’ll only be around for a short time. It’s due to hit stores in September, though, so if pumpkin spice isn’t your thing, you’ll be able to jump right past pumpkin spice season to winter wonderland season if you like. The Dark Chocolate Peppermint flavor will be available in 16-ounce bottles with a cost of around $3.29 per bottle. (Prices sometimes depend on the market, though, so prepare for that figure to rise or fall a bit based on where you happen to be located.)

Now if you’ll excuse me, I think it’s time for another cup of coffee…

More like this
10 Stranger Things-Inspired Halloween Costumes For True Fans
By Emma Carey
TikTok's Butter Board Might Be The New Cheese Plate
By Emma Carey
On TikTok, Tinned Fish Date Night Is The Latest Viral Food Obsession
By Emma Carey
64 Genius Gift Ideas For Every Single Guy In Your Life
By Teresa Newsome, Mia Mercado and Brittany Leitner
Get Even More From Bustle — Sign Up For The Newsletter