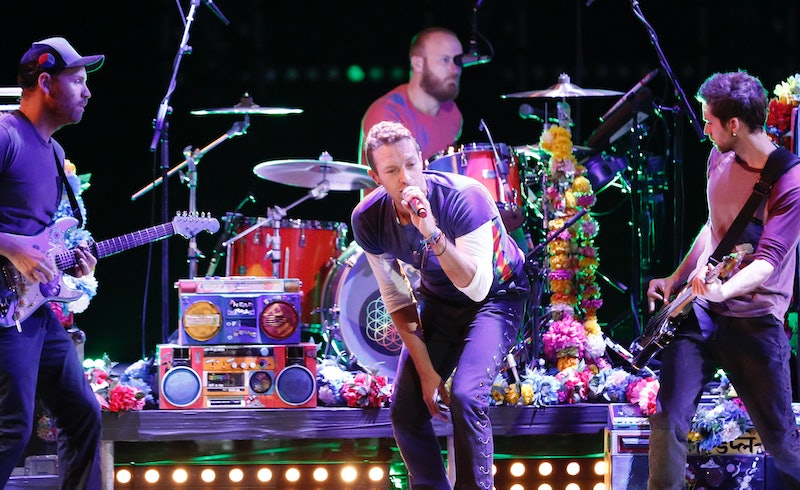 Coldplay are finally back on the airwaves ahead of their eighth studio album Everyday Life, but if you're anticipating a tour supporting the record you may have to wait a couple of years. No, they're not done with touring, but Coldplay wants to make touring more environmentally sustainable, and are planning on spending the next couple of years to figure out the means to do so.

In an interview with BBC News, singer Chris Martin explained how the band are focused on figuring out how to make their future tour "sustainable" and "actively beneficial", and how to counteract the emissions produced by travelling and the energy used during shows.

"Our next tour will be the best possible version of a tour like that environmentally," Martin said. "We would be disappointed if it's not carbon neutral. The hardest thing is the flying side of things. But, for example, our dream is to have a show with no single use plastic, to have it largely solar powered."

"We've done a lot of big tours at this point. How do we turn it around so it's [not] so much taking as giving?"

Coldplay aren't the first musicians to consider this, as singer Jack Johnson made sure that his 2016 tour included more environmentally friendly options. As HuffPost writes, this included "energy-efficient light bulbs installed throughout the facility and an order for the venue to purchase carbon dioxide offsets to cover all the energy used in the show."

As Johnson told HuffPost, changes like this are the only way to get venues to listen. "We just figured, all right, let's be demanding with these, because we know they're not going to switch back to those energy-draining bulbs once the show is over." The singer added:

"I didn't know if I needed to keep touring, especially when I considered the environmental impact of what I was doing."

Touring can have a significant impact on the environment, from the amount of energy used to power lighting rigs and instruments to how musicians, their crew, and concert-goers travel to the event. For example, Live Earth was put under scrutiny in 2007 after environmental site Carbon Footprint estimated (via The Guardian) that the concerts produced "more than 3,000 times the average Briton's annual footprint".

That same year, environmental charity Julie's Bicycle conducted a study that found "the sale of music products and live music performance to UK consumers [was] creating at least approximately 540,000" tonnes of CO2 emissions a year.

Drinks and food containers that consist of single-use plastic are also in high demand during concerts and festivals, with the UK producing more than "an estimated 23,500 tons of waste" annually, as CNN reports. But festivals like Glastonbury are signalling a change by ditching the plastic altogether.

"With more than one million plastic bottles sold [in] 2017, we felt that stopping their sale is the only way forward," Glastonbury organizer Emily Eavis told CNN. "[W]e need [to] move away from this idea of disposable living."