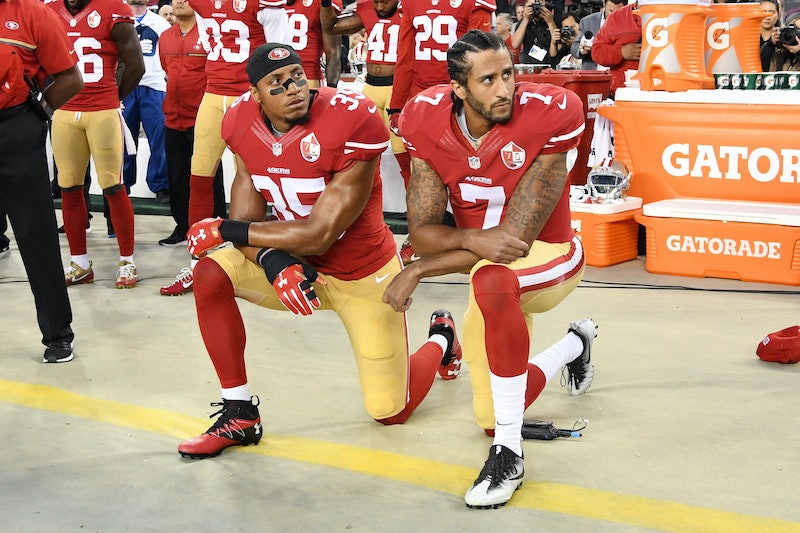 On Friday, the NFL and lawyers for Colin Kaepernick and Eric Reid jointly announced that Kaepernick and Reid's collusion complaint against the league has been resolved. According to a statement published by both the NFL and attorney Mark Geragos, the agreement between the players and the league is subject to a confidentiality agreement, which means that the terms of the settlement have not been made public.

“For the past several months, counsel for Mr. Kaepernick and Mr. Reid have engaged in an ongoing dialogue with representatives of the NFL," the statement read. "As a result of those discussions, the parties have decided to resolve the pending grievances. The resolution of this matter is subject to a confidentiality agreement so there will be no further comment by any party.”

Kaepernick filed his collusion complaint against the NFL back in October 2017, alleging that the league's teams had colluded to prevent him from playing following his national anthem protests. The NFL denied these allegations at the time, Vox reported, with NFL Commissioner Roger Goodell arguing that teams make decisions individually and in their best interests. But in May 2018, Reid also filed a grievance against the NFL and hired Geragos' law firm — the same one representing Kaepernick — to handle his case.

Following the NFL's joint announcement with Geragos' firm, the NFL Players Association issued a statement noting that it was not "privy to the details of the settlement," but that it supports "the decision by the players and their counsel."

"We continuously supported Colin and Eric from the start of their protests, participated with their lawyers throughout their legal proceedings and were prepared to participate in the upcoming trial in pursuit of both truth and justice for what we believe the NFL and its clubs did to them," the union said Friday. "We are glad that Eric has earned a job and a new contract and we continue to hope that Colin gets his opportunity as well."

Kaepernick did not go through the union to file his grievances, instead choosing to hire Geragos. According to ESPN, Kaepernick and Reid had trouble meeting the burden of proof necessitated by the NFL's collective bargaining agreement, which indicates that unemployment alone does not prove collusion occurred. This week, however, their collusion grievances were nonetheless resolved, though it is not publicly known what the financial or legal terms of the settlement were.

Kaepernick first started his protest in August 2016, when he sat during the national anthem. He explained that he would only stand when the United States and its flag started "representing people the way that it's supposed to" — by not oppressing people of color or condoning police brutality. In those early days, Kaepernick was alone in his protests, but in September of that year, he was joined by Reid, a fellow San Francisco 49ers player.

According to USA Today, Kaepernick is still a free agent, while Reid recently signed a three-year deal with the Carolina Panthers that is worth $22 million. Reid alleged earlier this month that his new contract with the Panthers was further proof of collusion in the league, noting that he only made $1.69 million after signing with the Panthers halfway through last season.