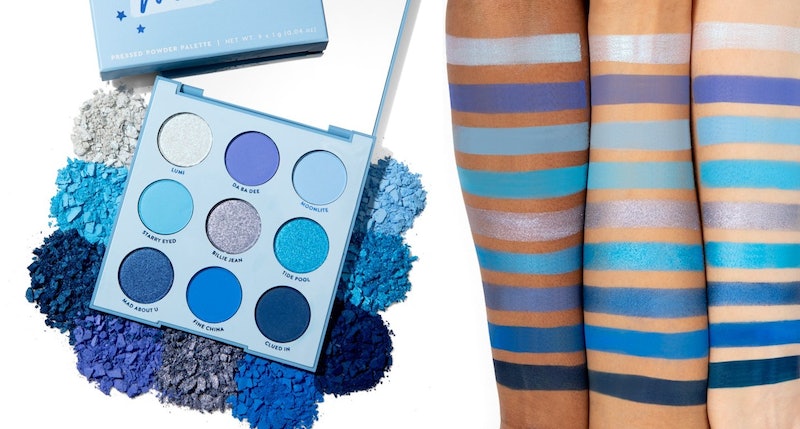 Blue shadow is the look to have this summer, and a bevvy of makeup artists, YouTube stars, and cosmetic brands have been working overtime to drop their own blue shadow palettes. One of the most popular palettes to hit stores was Jeffree Star's Blue Blood palette, and ColourPop's Blue Moon palette is a $12 dupe for Star's sold out collection.

Star's Blue Blood palette dropped in March 2019, and it had 18 eyeshadows of blues, mints and peaches. According to Star, it was "Blood Sugar's icy big sister," and had an array of cool tone shades to play with. Even though shoppers were limited to two palettes per customer, Star's palette still sold out, leaving plenty of beauty lovers without their icy blue fix.

But luckily ColourPop has come to the rescue with an affordable dupe. ColourPop's Blue Moon palette has five matte shadows and four metallics in different tones of blue. According to the product page, this palette was made because of popular demand. ColourPop devotees kept asking for a blue-heavy palette, and the brand delivered.

Seeing that ColourPop's palette has nine shades and Star's palette has 18 hues, the Blue Moon palette is obviously not a perfect dupe. But it incorporates some of the most popular blue shades from Star's version, giving you a chance to play with your own summer blue look.

In the Blue Moon palette, the first row has the light transitional shades in the collection. Lumi is a metallic iridescent icy blue, and is a close match to Star's Cullinan, which is an icy white. Da Ba Dee is a matte lapis blue, and Moonlite is a matte baby blue that is comparable to Star's Blue Blood hue.

The last row has Mad About U which is a metallic sapphire, and is a muted version of Blue Blood's Ocean Ice. Fine China is a matte vibrant cobalt blue, and is comparable to Star's Blue Monday, which is a vibrant blue matte. Lastly, Clued In is a matte navy.

The ColourPop palette will let you create mermaid-inspired eye looks all summer long, all without breaking the bank. The palette clocks in at $12, which means each shadow costs roughly $1.33. If you have been enjoying the blue shadow looks walking down red carpets and popping up on Instagram, then the Blue Moon palette is a budget-friendly way to recreate those looks.

For example, the models at the Rodarte show during 2019's New York Fashion Week stomped down the catwalk with pretty bursts of blue.

Going in a different direction, Lily Collins paired a dark blue with a dark red lip for ultimate drama.

Then Melanie Liburd proved that a quick swipe of blue on the lower lash line is a chic daytime move.

Snap up Blue Moon and play with your own blue shadow creations.