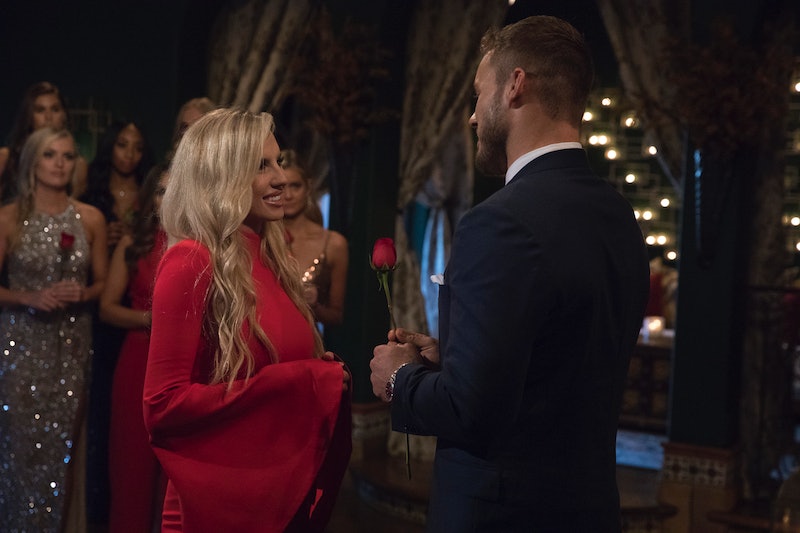 There were a lot of women who caught Colton Underwood's attention during Monday night's premiere of The Bachelor, but one contestant in particular that stuck out for fans (and not necessarily in a good way) was Catherine, who not only gave her dog to Colton upon stepping out of the limo, but also proceeded to interrupt his conversations with other contestants a total of four times throughout the night. However, it turns out that Colton "respected" Catherine's actions on The Bachelor and didn't have a problem with her stealing him away so often, even if it rubbed some viewers the wrong way.

"Honestly, even in the moment and even watching it, I'm like, all right, she's letting it be known that she's here for me, and she's going to do whatever she needs to do to get time with me," Colton told E! News during a recent interview. "I actually respected it." Some could take his comments to indicate that Catherine goes far this season — or perhaps even wins that final coveted rose. After all, defending her rather rude actions toward the other girls does seem like a very boyfriend thing to do. But when it comes to teasing out whether or not he got down on bended knee by journey's end, Colton is determined to keep his mouth shut on the matter.

"I like secrets. I want everybody to feel what I felt and go through it with me and experience it with me firsthand," he told the outlet during the same interview. "I don't want it to be leaked or people to have an idea of which way it's going to because that's how it was for me, sort of like this windy road of navigating my feelings and growing as a human being."

The good news is that the current Bachelor assured viewers that while his virginity is a major topic point right now (seriously, the number of times it was mentioned in the premiere was ridiculous), the jokes will tapper off as the season progresses. "Right now, it's old," he admitted to E! News. "Hang in there with us. We have a couple more episodes where they're going to still poke fun at it, but I think people are going to get a lot of answers."

Catherine, of course, will be part of that journey, but how long she'll be sticking around for remains to be seen. It's important to give credit where credit's due, though, and there's no denying Catherine has already made a lasting impression right from the start, both with Colton and with fans — and not just because of her "can I steal you for a sec?" ploy. Numerous fans couldn't help but notice during the premiere that Catherine bears a striking resemblance to Jennifer Coolidge, best known for her roles on American Pie, Legally Blonde, and A Cinderella Story.

If Catherine's goal was to be memorable, then mission accomplished. But as Bachelor fans know, those who are typically pegged as "the villain" don't stick around for too long. Though, if she still has Colton's support even now maybe she'll prove to be an exception to the rule.