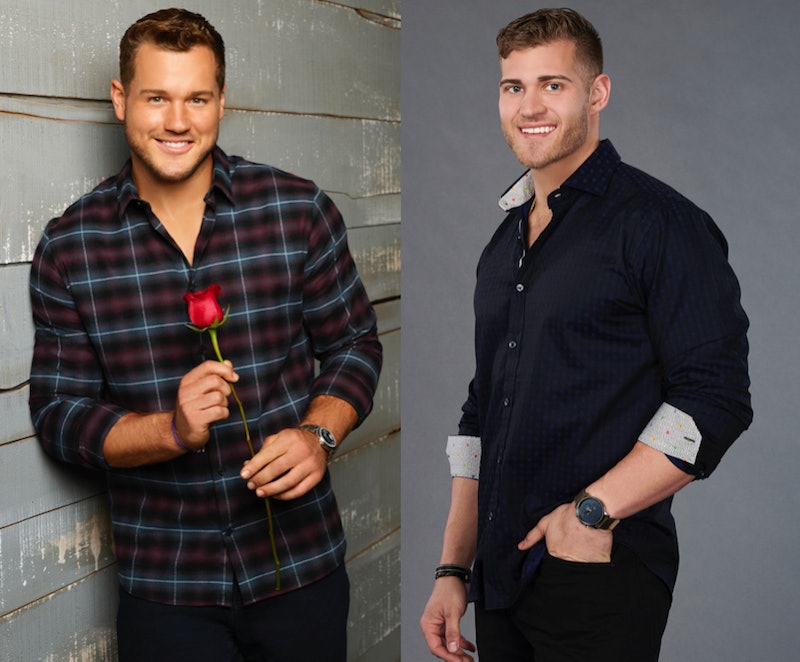 Luke P. has already been causing quite a bit of drama on The Bachelorette this season and while you can tell that Hannah B. isn't finding his actions all that charming these days, there is one person within the franchise more than willing to stick up for him. While attending iHeartRadio's 102.7 KIIS-FM Wango Tango concert over the weekend, Colton Underwood defended Luke P.'s behavior on The Bachelorette, and when you stop and think about it, that actually makes quite a bit of sense.

Luke P. came under fire in recent weeks after he began acting possessive of Hannah and getting very upset when some of the other guys received any kind of attention from her (which, you know, is bound to happen on a dating show). In fact, his attitude was causing such a disturbance that it prompted Hannah to take matters into her own hands, telling him to back off a bit and give her some space. Luke P. has since addressed his flawed behavior on Instagram, saying, "I'm the first to admit I am far from perfect."

However, Colton is hoping fans won't write this contestant off just yet. "I actually like Luke P.," he told Entertainment Tonight. "Listen, if this was anything other than The Bachelorette and the formula and what it is, it would just be a guy who knows what he wants and he's committed to a girl that he can see himself lasting with. But, since there’s other options it’s coming off as a little overbearing."

It's true that the Bachelor franchise likes to make everything on the show seem more dramatic than it actually is, but it's hard to condone Luke P.'s actions under any circumstances. He's been quick to anger when things haven't gone the way that he wants it, and he came suspiciously close to dropping the L word on Hannah after pretty much five minutes of knowing each other. Sure, editing can make things look more extreme than they actually are, but those personality traits on any level can be concerning.

That being said, it's not all that surprising that Colton would be sympathetic to Luke P.'s plight, considering he too knows what it's like to go after what he wants. After Cassie decided to leave the show since she wasn't sure if she was ready to commit to him, Colton jumped the fence and ended up sending his remaining contestants home in order to try and win Cassie back. The gesture worked and the two are still together to this day, though Colton's actions were also deemed questionable by some, believing it could set a dangerous precedent and validate the belief that men shouldn't take no for an answer. Ultimately, Cassie seems happy that Colton fought for their relationship. But Hannah doesn't seem to be as thrilled by Luke P's tactics, and that really makes all the difference.

Nevertheless, Colton believes fans shouldn't completely judge a book by its cover when it comes to this show. "I haven't [met Luke] yet, but from what I see, it's so hard because you can't judge these guys or even Hannah just off of what you’ve seen," he told ET during the same interview. "It is such a small fraction of who they are."

One can only hope viewers end up seeing a different side of Luke P. in the weeks to come. Otherwise, it may be time for him to get shown the door.