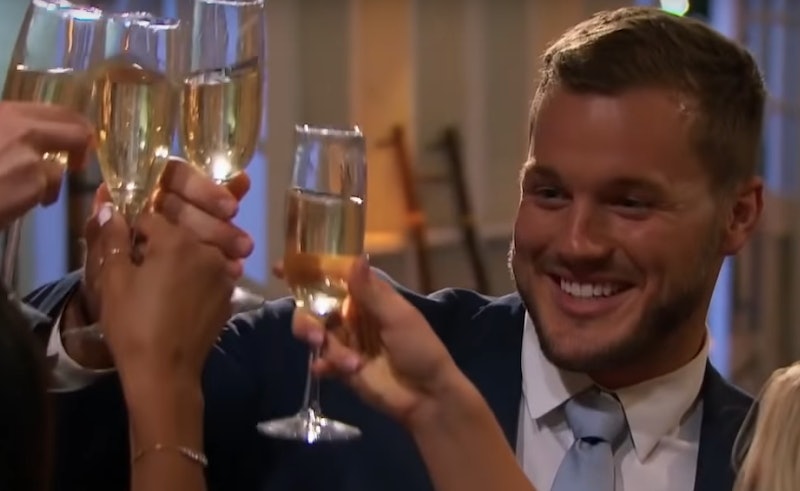 On Tuesday evening during a commercial break for the Dancing With The Stars finale, Colton Underwood's first Bachelor promo was revealed — and it was as dramatic as you'd expect. For one, the 90 second teaser revealed that Underwood's virginity is probably going to play a central role in his season. Then, the first sneak-peak closed off with a pretty strange scene: a clip of the bachelor throwing himself over a fence. And the reason why is anyone's guess.

"I'm f*cking done," Underwood can be heard saying as he walks toward the fence, with host Chris Harrison chiming in, "Holy sh*t, Colton!"

Then, there's the noise of multiple women screaming as Underwood is seen catapulting himself over a massive fence. But, perhaps unsurprisingly for those who know how dramatic this show can get, that was nowhere near the only shocking part featured in the promo.

In fact, Underwood might just have lost his virginity during the filming for The Bachelor. At one point in the promo, Harrison tells Underwood he could lose it "this week." Underwood replies, "Sexual intimacy is a big part of any relationship."

Then, an unidentified woman says in the next scene, "Could Colton lose his virginity in Singapore? Maybe!"

The Bachelor Season 23 premieres on Jan. 7 on ABC. Underwood, who played for the NFL before trying his hand at the reality television circuit, was chosen as the next Bachelor because of his "good looks, love for dogs and vulnerability," according to an ABC press release in September. And though Underwood's virginity is certainly being played up in the promo (one woman says to him at one point, "I have not dated a virgin since I was 12!"), Underwood is not the first virgin to be the Bachelor.

In fact, one of the most "successful" (i.e. still married) Bachelors was also a virgin when he filmed the show. Sean Lowe and Underwood are likely to draw many comparisons due to their lack of sexual histories — but Underwood, unlike Lowe, has had a much more high-profile background leading up to his debut. In addition to his time in the NFL, he also notably dated gymnast Aly Raisman before appearing on The Bachelorette. Then, after The Bachelorette, he also did a stint on Bachelor In Paradise.

In July, Underwood posted a lengthy Instagram about his virginity after a "Men Tell All" episode where he was teased for it. He wrote, "I considered [my virginity] a gift and a curse for many years, but finally have come to terms about standing up for who I am and the details that make me, me. Anyone who feels like they are hiding their truth out of embarrassment or fear of being judged."

He continued, "We all have something that we hold close to us and something that makes us unique in our own ways. I ask for respect from everyone I meet moving forward and I’m here to call on everyone that needs that extra motivation to be 'different' - HERE IT IS."

Underwood's most recent Instagram post is slightly more playful: it features a screen-grab of Underwood jumping over the fence, with a caption that read, "Bachelor nation jumping to conclusions like..."

He's definitely dead on the money with that hot take.