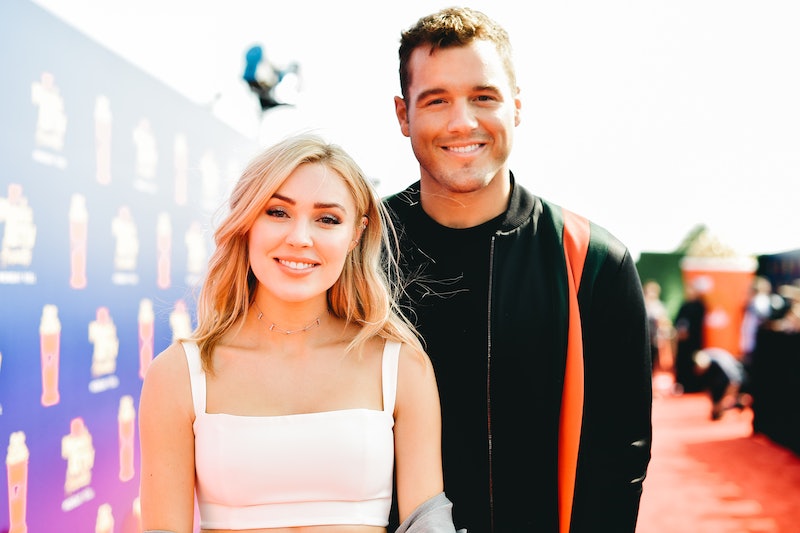 Bachelor star Colton Underwood and his girlfriend, Cassie Randolph, are still going strong. In fact, they're going so strong that they've been able to lean on each other through some of the more difficult moments. As he posted on June 27, Colton Underwood's new Instagram post from his vacation with Cassie to Bermuda shines a light on some of the issues you don't always see displayed on social media.

In the former Bachelor's Instagram post, which included a cute selfie of the two reality stars, he got super real about how he still struggles with his anxiety. Colton described that he still deals with the disorder even if it might not seem like it based on the "false confidence" that he shows on social media, which is certainly something that many others struggling with anxiety can relate to, particularly in this day and age. He wrote,

"What a week. Lots of reflecting and soaking in everything that has happened these past few months. At times I have felt super overwhelmed and my anxiety has ran really high. I’m still looking for my purpose and I’m still looking for a better sense of direction...even when I act like I have it all together and figured out (I like to call it my false confidence)"

He continued to say that those closest to him, obviously including Cassie, have helped him through some of those difficult times,

"but the one thing I do have figured out and am certain of is that I’m very grateful and very very lucky to have so many incredible people in my life. I’m so appreciative of you all. You are blessings."

This is far from the first time that Colton has opened up about the important topic of mental health. In February, he spoke with TV Insider about his season of The Bachelor, where he revealed that the show provided him with a therapist that he could talk to throughout the filming process, which was invaluable resource that helped him deal with the stress of said process. He also told the publication,

"I’m a big advocate for mental health. I think just as much as I want to work out and work on my physical appearance, I think it’s really important to exercise your brain as well too. I can’t say enough good things about how they provide that opportunity for me to have that space and to have that security with no microphones and cameras, so that when I do need to go vent, or be alone, or talk through things with somebody, I have that safe space."

On Twitter, Colton expanded upon his statement in a (since-deleted) message in which he rightly stated, as Us Weekly noted,

"On a serious note, I see a therapist regularly. This doesn’t make me crazy or delusional… it actually makes me sane. Mental health is HEALTH.”

It goes without saying, but Colton's messages about mental health are just so important to keep in mind. Additionally, just based on those messages, it's clear that the former Bachelor has a great understanding of himself, struggles and all, and knows exactly who he can lean on during any of those hard moments.