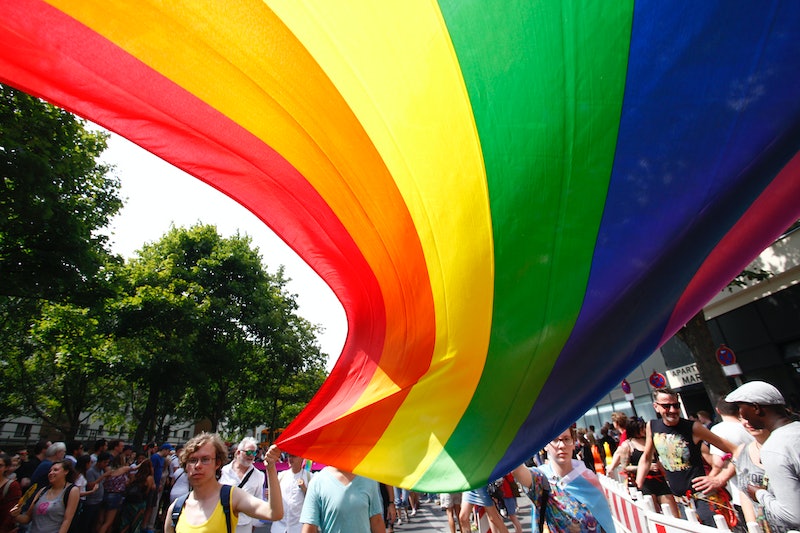 The Trump administration has already put active effort into eroding the monumental increases in rights and protections LGBTQ people won while the Obama administration was in power. Department of Justice head Jeff Sessions has taken particular aim at workplace protections, arguing that it shouldn't be illegal to fire people based entirely on their sexual orientation, and wholesale ending all federal protections for transgender employees. Despite the DOJ's opposition, the Human Rights Campaign's (HRC) 2018 Corporate Equality Index (CEI) found that the number of companies in the U.S. that support their LGBTQ employees is now at a record high.

The CEI, which was published on Nov. 9, assessed 947 "major companies and law firms across the nation," according to an HRC press release. Businesses were rated on a scale from zero to 100. Of the 947 businesses assessed for the 2018 CEI, a staggering 609 earned a perfect score of 100, which is a single-year increase of 18 percent — the largest increase on record. Some of the country's top businesses to earn a perfect 100 include Apple, AT&T, Amazon, General Electric, CVS, Verizon, and Ford.

"This record sets a new high water mark for corporate leadership over the 15-year history of the CEI," the HRC added in its press release.

According to the CEI report, the areas where the most businesses faltered were in public commitment to the LGBTQ community (53 percent have made commitments) and in transgender-inclusive benefits (58 percent offer benefits). This is still a rise from the 2017 report, in which public commitment to the LGBT community stood at 47 percent, and the percentage of businesses offering transgender-inclusive benefits was just 50 percent.

The fact that businesses are improving inclusiveness for LGBT employees despite the current administration's policies is a positive sign, said HRC president Chad Griffin in the CEI press release. "At a time when the rights of LGBTQ people are under attack by the Trump-Pence Administration and state legislatures across the country, hundreds of top American companies are driving progress toward equality in the workplace," he explained. "The top-scoring companies on this year’s CEI are not only establishing policies that affirm and include employees here in the United States, they are applying these policies to their operations around the globe and impacting millions of people beyond our shores."

And more of these companies are choosing to take their supportive private policies public. "In addition, many of these companies have also become vocal advocates for equality in the public square, including the dozens that have signed on to amicus briefs in vital Supreme Court cases and the 106 corporate supporters of the Equality Act," Griffen added. "We are proud to have developed so many strong partnerships with corporate allies who see LGBTQ equality as a crucial issue for our country and for their businesses."

Many companies have improved their scores over the years, but Apple is one company that has a straight flush of perfect 100s — 15 overall, one for each year the CEI has been published. In the Inclusity & Diversity section of its website, Apple outright states that "LGBTQ rights are human rights," and that "[p]eople should not be discriminated against because of their sexual orientation or gender identity." Along with standing behind its LGBTQ employees, the company openly financially supports GLSEN, PFLAG, The Trevor Project, and ILGA.

Some companies who did not receive a 100 on the 2018 CEI are taking the opportunity to address the areas where their scores took hits. For example, Dunkin' Brands Group Inc., the folks behind Dunkin' Donuts, debuted on the CEI this year, and scored a 90. Chief legal and human resources officer Rich Emmett submitted a statement to the HRC saying that though Dunkin' Brands is proud of its 90, the company "will strive to reach 100 in future years."

The DOJ will undoubtedly continue to oppose workplace protections for LGBTQ people as long as this administration is in office, so keeping queer employees safe truly is on private businesses businesses' shoulders. The 2018 CEI's findings are heartening, and it doesn't seem like too far a stretch to hope that the 2019 CEI will be another record-setter.

More like this
25 Inspiring Quotes From Black Women To Celebrate Black History Month
By Kyli Rodriguez-Cayro and JR Thorpe
24 History-Making Black Women You Probably Didn't Learn About In School
By Ayana Lage and JR Thorpe
Gen Z Are Twice As Likely To Identify As Queer, According To New Data
By Sam Ramsden
What The UK Blocking Scotland’s Gender Recognition Bill Means
By Sam Ramsden
Get Even More From Bustle — Sign Up For The Newsletter
From hair trends to relationship advice, our daily newsletter has everything you need to sound like a person who’s on TikTok, even if you aren’t.