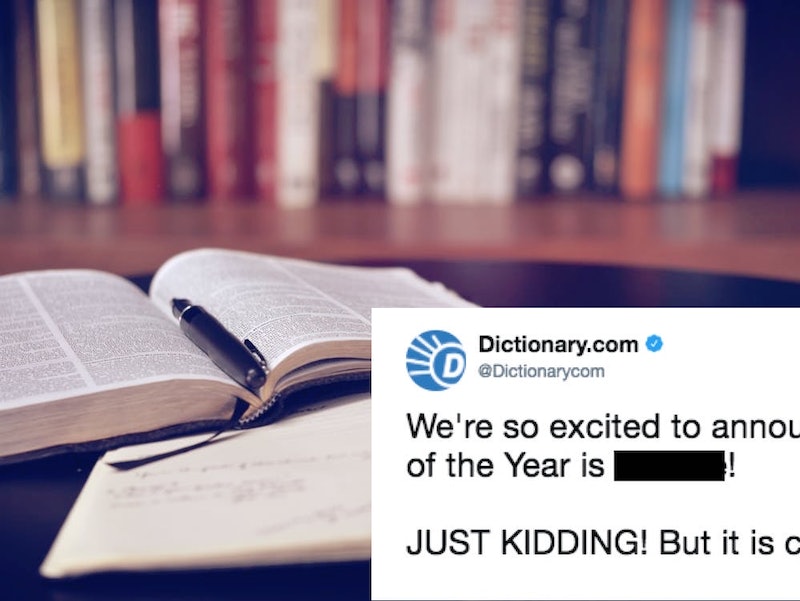 Siri, what does "complicit" mean? In a year marked by sexual harassment allegations and concerns over Russian influence on American politics, so many people had to look up the meaning of the word that it was chosen as Dictionary.com's 2017 word of the year. Is the word choice also meant to throw a little shade at certain public figures? I'll let the site's announcement tweet speak for itself.

On Monday morning, Dictionary.com announced the word of the year in what may very well be the saltiest tweet a dictionary website has ever produced. ("Cranky dictionary tweets" may be a bit of a niche category, but trust me — it's entertaining enough to warrant a Wikipedia page. Someone should get on that.) The site tweeted, "We're so excited to announce the Word of the Year is covfefe! JUST KIDDING. But it is complicit."

In case you forgot, "covfefe" is a word Donald Trump — or perhaps more accurately, his phone's autocorrect — created by accident in May. One fateful night, he indulged in one of his favorite pastimes, the semi-coherent midnight tweet. This time, however, its contents left everyone even more baffled than usual. "Despite the constant negative press covfefe," read the tweet.

Naturally, the American public assumed "covfefe" was an accident borne of bumbling fingers, and the tweet would be instantly deleted once the president realized his mistake. But the tweet stayed up. And up. And up. It was finally taken down after a few hours, but the damage was done: Covfefe had become a meme as the denizens of the Internet tried to define the word.

But I digress. While covfefe has an Urban Dictionary entry, it has yet to be officially recognized by any other literary institution. But clearly, that didn't stop Dictionary.com from getting in a little dig at the president in its announcement tweet.

Somewhere out there, I sincerely hope the site's social media editor got a promotion, or at least an office-wide pat on the back.

On its website, Dictionary.com explained that the word of the year is meant to serve as a "symbol of the year’s most meaningful events and lookup trends." In 2017, "complicit" came to define the year.

According to the site, searches for the word spiked nearly 300 percent in 2017, with three major spikes. The first came the day after a Saturday Night Live skit depicted Scarlett Johansson as Ivanka Trump peddling her new perfume, Complicit. The biggest bump was after CBS This Morning aired an interview with the real Ivanka in which she claimed not to know the meaning of the word. Finally, there was a modest spike in searches after Republican senator (and frequent critic of the president) Jeff Flake announced he would "not be complicit" and would retire from politics.

If you, like Ivanka, don't know what complicit means, Dictionary.com defines it as "choosing to be involved in an illegal or questionable act, especially with others; having complicity." Judging from the online reaction, most people seem to agree it's an appropriate choice for a year in which mass shootings have occurred with disturbing regularity and an ever-growing list of powerful figures have been accused of sexual assault.

One user joined in on the shade, tweeting a reference to Trump's claim that he passed up the chance to be TIME magazine's Person of the Year.

In a move that will make you love Dictionary.com even more, the site kept the joke going.

On the announcement page, though, Dictionary.com was a bit more heartfelt:

"This year has seen a real awakening to complicity in various sectors of society, from politics to pop culture.

As we do the hard work of processing what this all means, we must examine our own behavior and ask ourselves some difficult questions. Could I have spoken out in the past . . . and didn’t? Did I go along with something because it was the path of least resistance?"

These are all important questions — ones you can ponder after you stop cackling at Dictionary.com's salty, salty Twitter feed.