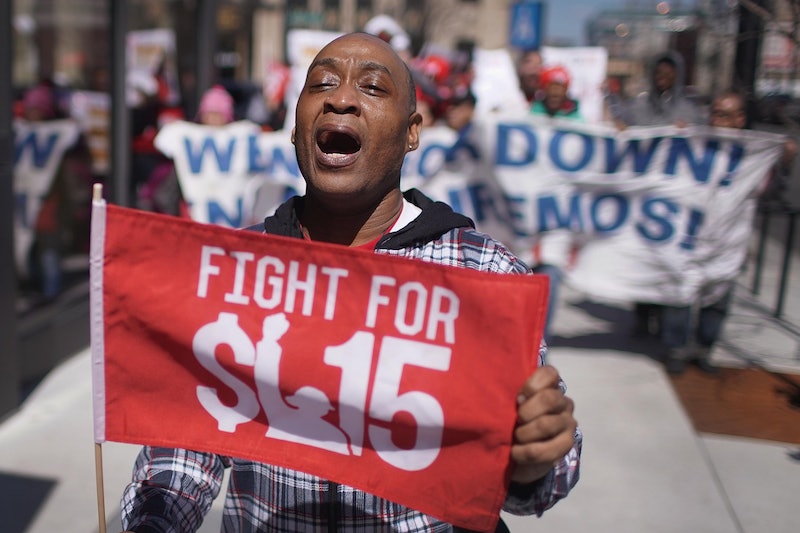 Thanks to inflation, a dollar is worth less than it was a decade ago — and yet Congress hasn't raised the minimum wage in over 10 years. That's the longest-ever stretch of time during which the federal minimum wage has remained stagnant, Vox reports, and according to a new study, workers have taken a serious financial hit because of it.

Congress raised the federal minimum wage to $7.25 per hour in 2009, and that's where it's remained ever since. But inflation has reduced the value of the dollar over time, and as a result, $7.25 isn't worth what it was in 2009; it's only worth around $6.10 in 2009 dollars, according to the government's inflation calculator. If Congress had increased the minimum wage solely to account for inflation's effect on the dollar, it would now be $8.70 an hour.

But it hasn't. As a result, the "real value" of the minimum wage has fallen by 17% over the last decade, a study from the Economic Policy Institute found. That adds up over time. Thanks to the stagnant minimum wage, the lowest-paying workers in America now earn $3,000 less every year in "real" dollars than they would have in 2009.

The picture becomes even starker when you considers the larger historical context. In 1968, the minimum wage was $1.60 an hour. That may not seem very high — except when you consider the fact that, in 2019 dollars, that would amount to a $10.54-per-hour minimum wage, according to the Economic Policy Institute.

One easy way to fix this would be to pass a law that automatically increases the minimum wage relative to inflation, a policy known as "indexing." In fact, 18 states and the District of Columbia have done exactly that, according to the Economic Policy Institute. In addition, some states have simply enacted minimum wages that are higher than federal law requires. As a result, the minimum wage is at least $8.00 in 28 states, at least $10.00 in 13 states, and at least $12.00 in three states, plus the District of Columbia.

According to a Hill/HarriS-X poll from January, 55% of voters support raising the minimum wage to $15 an hour, while another 27% said it should be raised but not by as much. Only 14% said that the minimum wage should remain $7.25 an hour.