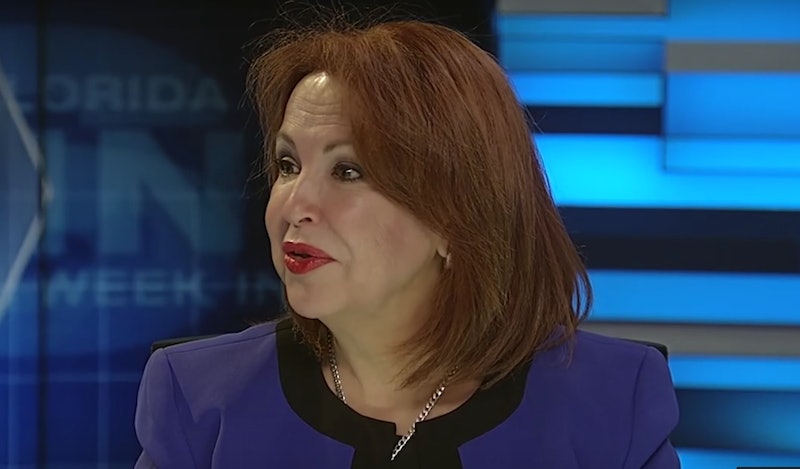 Bettina Rodriguez Aguilera isn't your typical congressional candidate. For one thing, she's a former social worker and the daughter of a Cuban political prisoner. Oh, and also, she claims to have been abducted by extraterrestrial beings when she was a kid. Despite her interest in aliens, Bettina Rodriguez Aguilera's congressional campaign was officially endorsed by The Miami Herald this week, as The Cut reported.

Rodriguez Aguilera is running as a Republican for the chance to represent Florida's 27th Congressional District, replacing Rep. Ileana Ros-Lehtinen upon her retirement. Amidst a crowded field for both Republican and Democratic candidates, The Miami Herald's recent voter guide says Rodriguez Aguilera is an "unusual" choice, but ultimately "a strong candidate in the race with plausible conservative ideas."

Before her bid for Congress, Rodriguez Aguilera went on Spanish-language TV shows to talk about her experience with aliens. She claims the aliens took her on board their spaceship when she was 7, per The Washington Post. By her account, she saw three tall, full-figured beings who spoke to her telepathically.

“This is a non-issue,” she told The Miami Herald's editorial board. But her alleged run-in with extraterrestrial life wasn't a one-time occurrence; The Miami Herald adds that the congressional hopeful claims to have communicated telepathically with the aliens throughout her life.

Rodriguez Aguilera has firmly stood by her belief in aliens for decades, telling The Herald last year that she is a Christian who also happens to believe that intelligent life exists beyond planet Earth.

“For years people, including presidents like Ronald Reagan and Jimmy Carter and astronauts have publicly claimed to have seen unidentified flying objects, and scientists like Stephen Hawking and institutions like the Vatican have stated that there are billions of galaxies in the universe and we are probably not alone,” she said. “I personally am a Christian and have a strong belief in God, I join the majority of Americans who believe that there must be intelligent life in the billions of planets and galaxies in the universe.”

While Reagan and Carter both reportedly believed in aliens — and Carter even claimed to have seen a UFO in 1969, per the History Channel — neither alleged they were abducted by aliens and could speak to them telepathically.

Adding to her theories about life beyond Earth, Rodriguez Aguilera further claimed in YouTube videos she posted years ago that aliens told her the world’s “energy center” is in Africa, McClatchyDC reports. Other information she believes she gleaned from the aliens include: the Coral Castle, a tourist attraction in Miami-Dade, actually being an ancient Egyptian pyramid; and a cave on the Mediterranean island of Malta apparently containing 30,000 skulls that are "different from humans."

Rodriguez Aguilera already has connections on Capitol Hill, as her son-in-law currently serves a Vice President Mike Pence's deputy chief of staff, according to The Herald. Her daughter is the former outreach director for the Republican National Committee Hispanic.

Though it's unclear what impact Rodriguez Aguilera's belief in aliens will have on voters ahead of the Aug. 28 primary, her support at the polls might not be out of this world. She'll face nine Republican challengers on the ballot, with local broadcast journalist Maria Elvira Salazar leading the GOP field by double digits in a recent poll conducted by The Herald. Rodriguez Aguilera and most of the Republican hopefuls received the support of less than 3 percent of likely voters before the newspaper endorsed Rodriguez Aguilera.

More like this
Iran Has Issued A Death Sentence Over Mahsa Amini Protests
By Catharina Cheung, Darshita Goyal and Maxine Harrison
Joe Lycett Just Took HIs David Beckham Qatar Protest To A Whole New Level
By Sophie McEvoy
What To Know About Martin Bashir After Watching 'The Crown'
By Bustle UK
Read Dan Levy's Heartbreaking Message After The Club Q Shooting
By Stephanie Topacio Long
Get Even More From Bustle — Sign Up For The Newsletter