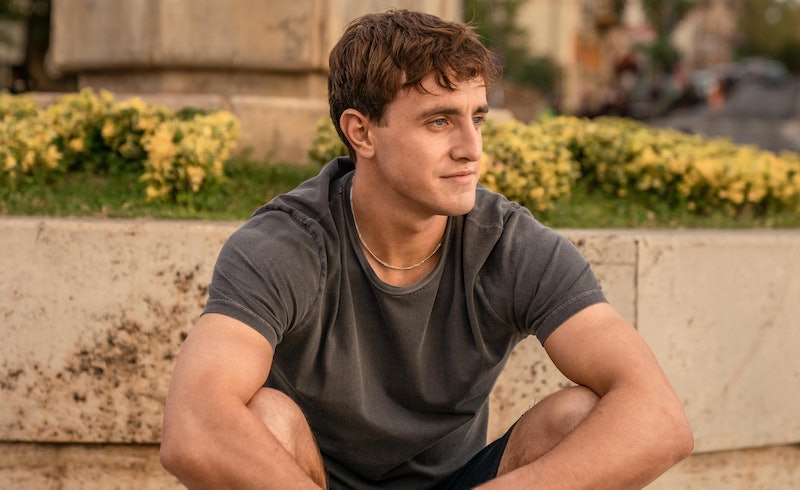 Based on Sally Rooney's best-selling novel, Hulu's new series Normal People garnered a cult following almost immediately after its release. It's nearly impossible not to binge watch, as main characters Connell and Marianne draw you into their on-again-off-again relationship throughout high school and college. To help tell their romantic, coming-of-age story through style, costume designer Lorna Marie Mugan pulled references from real-life students, scenes from the novel, and past eras in fashion.

Though the series is set from the years 2016 to 2019, the costumes feature a nuanced air of nostalgia, reflecting the biggest sartorial trends of decades past. At Trinity, Marianne's 1930s-inspired silk set "seems like a signature style of her individualism," says Mugan. "It's a thrift store sustainable choice by Marianne, rather than high fashion with no personality." In Italy, the character channels '60s style in a little gingham dress and "Connell sees her as an angel." '90s fashion is also prominent in the series, "as the eclectic mix of students we observed around Dublin, tend to lean toward" that era, Mugan explains.

The multiple references make sense, as Marianne and Connell's style changes throughout the series as their characters evolve. Marianne, for example, reinvents herself in college, cultivating a look that reflects her broadening cultural tastes. "As their lives changes, we made subtle shifts in style," shares Mugan. "Four years can be profoundly transforming in a young person’s life, especially moving from a rural town to a big city, alone."

One thing that remains the same is Connell's chain, which he wears throughout the series, starting in his high school days. "The chain became a constant presence," Mugan says. It became so prominent, in fact, that it inspired an Instagram account boasting over 140,000 followers and counting.

Ahead, Normal People’s costume designer, Lorna Marie Mugan, gives Bustle the backstory behind Connell's chain and 8 other iconic looks from the show. Read on for more.

"In school, Connell is a popular sports hero. He is identifiable by his cool black zipped track top and this sets him apart from his friends, who wear unfashionable jeans and leather shoes.

When he arrives at Trinity, he seems a little out of step amongst these new preppy and fashionably bohemian types. It's an alien world to him, but he remains very rooted to his home culture and is not interested in changing his look to blend in. He does not apologize for who he is."

"Marianne stands out at school, with her long skirt, flat shoes, and single braid. Her odd style is quite alienating to the other girls who strive to look conventionally attractive and similar to each other.

She reinvents herself at college. What was odd and alienating about her in Carricklea has now evolved into something enigmatic and appealing. Her style is influenced by her broad cultural tastes with nods to art house and cinema icons.

There is then a shift in her trajectory during the story, as Connell weaves in and out of her life. Unhealthy relationships draw her into a more joyless phase in her appearance."

"In Italy, when we see her for the first time in the little ‘60s gingham printed dress, we are told in the book that Connell sees her as an angel. There is a fragility and vulnerability to her in Italy and this is reflected in the delicate fabrics and simple shapes.

In Sweden, she is at a low and lonely point, her look is weighted in a big coat and all her clothes are dark. Accessories are paired back in the periods of unhappiness.

By the end, they are more comfortable in themselves and contented in their relationship and come together in similar tones and textures. Like 'two little plants sharing the same plot of soil, growing around each other.'”

"In the novel, Marianne notices [the chain necklace] on Connell as something he has had since school days and Peggy notes that it is 'argos chic.'

It speaks of class and Connell's place in the world. Class and power are big themes throughout the story.

Paul was keen to wear it all time and it became a constant presence with Connell. I think the beautiful cinematography by both Suzie Lavelle and Kate McCulloch really picked up on something that we did not notice."

"I like Marianne’s first look, when we see her at Trinity. The cream 1930s silk shirt, silk culottes, cream boots, long scarf, and velvet jacket. It seemed like a signature style of her individualism. A thrift store sustainable choice by Marianne, rather than high fashion with no personality."

"The grey school uniforms speak of school having a mundane suffocating environment, blocking self-expression and individuality."

"Marianne is individual in her own skin from an early age. It doesn’t conform to the traditional feminine style of girls in her town. The black net jumper hints at vulnerability."

"I think this is Marianne’s one attempt at trying to conform and fit in. Maybe in her mind, she is dressing just for Connell. Her immediate sexual allure, unfortunately for her, seems to make her family and the school peers in the night club more uncomfortable and threatened by her."

A Stolen Moment In The Square

"The dark colors were dictated partly by the brightness of the square we were filming in. There is a stolen moment alone, snatched here with Connell, so it seemed appropriate to have a romantic style. There is also a fragility and vulnerability in Marianne in this whole episode."

More like this
Wait, Is Barney Stinson Related To Sophie On 'HIMYF'?
By Gretchen Smail
Everything To Know About 'Only Murders In The Building' Season 3
By Gretchen Smail and Kadin Burnett
15 Of Carrie Bradshaw’s Best Handbags From Sex & The City
By Dominique Norman
This 'Bachelor' Contestant Had The Best Reaction To Wearing The Same Dress As Another Woman
By Grace Wehniainen
Get Even More From Bustle — Sign Up For The Newsletter
From hair trends to relationship advice, our daily newsletter has everything you need to sound like a person who’s on TikTok, even if you aren’t.