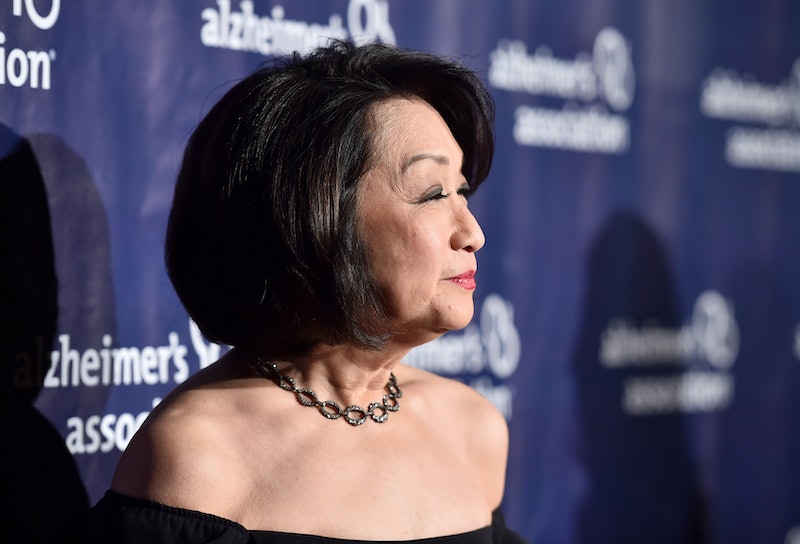 In one of the countless heartbreaking moments of connection that have occurred between sexual assault survivors in the last week, journalist Connie Chung's letter to Christine Blasey Ford opened up about her own experience with assault. Written in The Washington Post, Chung explained why she kept her "dirty little secret" to herself, and also explained why she, like Ford, could remember some details with absolute certainty and some things, not so much. "The exact date and year are fuzzy," Chung wrote, "But details of the event are vivid — forever seared in my memory."

Since Ford came out with her public allegation of sexual assault (specifically, attempted rape) against Brett Kavanaugh, her testimony, allegations, and level of credibility have been put through the ringer. Though Kavanaugh said he "did not wish ill will" against Ford, he has repeatedly insisted that he did not sexually assault anyone. In his opening remarks before the Senate Judiciary Committee, Kavanaugh said, "Sexual assault is horrific."

Many of Kavanaugh's supporters have been openly doubtful and occasionally cruel to Ford in the wake of her allegations. During a rally on Tuesday, Donald Trump openly mocked Ford's testimony, often incorrectly citing her as saying, "I don't know," to a series of questions. Each time he mocked her, the crowd laughed and cheered him on. He was later criticized for his behavior by many, but White House Press Secretary Sarah Huckabee Sanders claimed that Trump was "stating facts."

Chung's letter to Ford seems to be an active rebuttal to that cruelty. She writes,

Am I sure who did it? Oh yes, 100 percent. I was a cool college coed but not that cool. I was still a virgin in the ’60s. I did advance to the so-called heavy petting stage, short of intercourse. I assumed that would come next. I went to my family doctor to ask for birth-control pills, an IUD or a diaphragm.

Again, I cannot remember the exact date or even year. Yet I can still describe the following in detail. He drew the curtain, asking me to remove my clothes below the waist while he sat at his desk by the bay window. When I was ready, he came to the examination area and installed stirrups on one end of the cushioned examination table.

Chung told Ford that she may have told one of her sisters what happened, but she certainly never told her parents or the authorities. She said, "All I wanted to do was bury the incident in my mind and protect my family."

Chung continued, "Christine, I, too, am terrified as I reveal this publicly. I can’t sleep. I can’t eat. Can you? If you can’t, I understand. I am frightened, I am scared, I can’t even cry."

Many well-known individuals have come out in the wake of Ford's testimony to share their own experiences with sexual assault, including Busy Philipps, Ellen DeGeneres, and Jemima Kirke. All of them voiced similar feelings about their assault, and about their reasons for not coming forward about it earlier: that women are taught to stay silent, that they were afraid they wouldn't be believed, that they simply wanted to bury the trauma, and more.

Chung concluded by applauding Ford's bravery for speaking out in spite of her fears, and for being vulnerable on the most public stage possible. She wrote,

I wish I could forget this truthful event, but I cannot because it is the truth. I am writing to you because I know that exact dates, exact years are insignificant. We remember exactly what happened to us and who did it to us. We remember the truth forever.

In her final remarks, Chung wrote, "Bravo, Christine, for telling the truth."