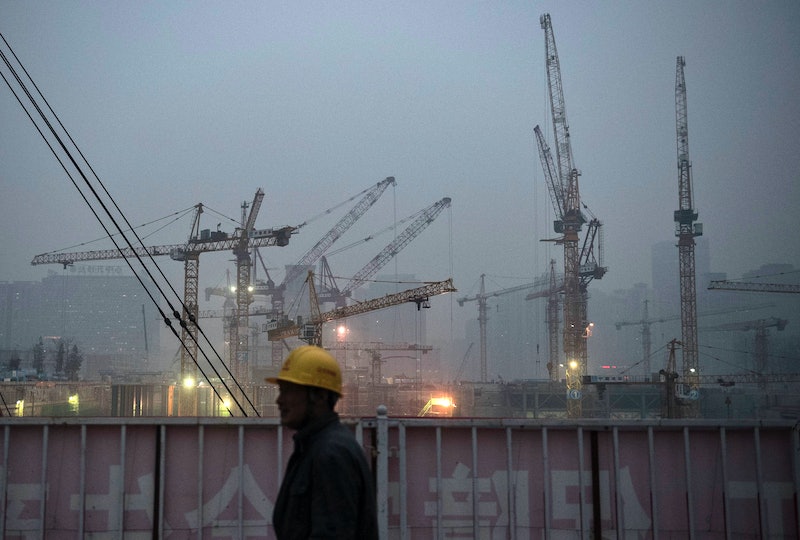 Marginalized social identities can rarely take a step forward without pushback from the oppressive majority, so it's no surprise that the conservative news outlet the Washington Examiner published an anti equal pay op-ed on Equal Pay Day. Nor is it surprising that the article relied on overly broad data analysis and intentional obfuscation to attempt to piece together a tragic tale of male discrimination. Here's exactly why the claim that the gender gap in workplace fatalities is anywhere near as important as the wage gap is totally "bogus."

Ironically enough, the phrase "apples-to-oranges comparison" appears in the very first sentence of the article, which is exactly what the rest of the article tries to do.

Every year the National Committee on Pay Equity publicizes its bogus feminist holiday known as Equal Pay Day to bring public attention to a completely spurious, apples-to-oranges comparison of incomes by gender.

Inspired by Equal Pay Day, I introduced Equal Occupational Fatality Day in 2010 to bring public attention to the huge gender disparity in work-related deaths every year in the United States. Equal Occupational Fatality Day tells us how many years into the future women will be able to continue working before they will experience the same number of occupational fatalities that occurred for men during the previous year.

However, comparing workplace fatalities with the wage gap is nuts, in large part due to the scale of the two problems. There were approximately 4500 male workplace fatalities in 2015 (and around 350 female workplace deaths) — in that same year, more than 73 million women (aged 16-plus) participate in the American workforce, and every single one of them has been effected by workplace financial discrimination in some form. Whether they were denied a raise or promotion, found out they were making less money than their male coworkers, or consistently penalized for trying to maintain work-family balance, every woman knows the experience of working just as hard to achieve less. Not even close to every man is in that kind of danger in the workplace.

Yes, there is an element of hazard to dangerous jobs like mining or construction that should constitute higher pay, but that's a necessary evil of those jobs. Truck drivers, who have the most dangerous career according to the Bureau of Labor Statistics, log millions of miles each year, so naturally, some of them are going to die in accidents. That doesn't mean that feminized work like teaching and nursing should be financially undervalued just because it isn't inherently dangerous (even though teaching now has a non-zero risk of dying in a shooting). Also, as the author implores, people are trying to close the workplace fatality gap — the trucking industry is desperately trying to bolster its workforce by recruiting women, but mentioning that would have put a damper on his whole "woe is me(n)" vibe.

Though it was presumably not the author's intention, the article also lowkey goes against everything the Examiner stands for, just so it can take a sh*t on feminism. Perry claimed to have first address his proposed "Equal Occupational Fatality Day" back in 2010 , but since then, he's repeatedly brought up these statistics about male deaths in the workplace without any kind of meaningful analysis of the data.

However, those numbers from the Bureau of Labor Statistics tell an intersectional story at odds with the Examiner's sociopolitical lean. In 2015, 29 percent of workplace fatality victims were either Black or Hispanic/Latinx. Does that mean you're going to suddenly start standing up for Latinx immigrants and Black Lives Matter? Didn't think so. Another 5 percent of workplace deaths were suicides, so those can be thrown out entirely. And the biggest nuance of this data set that the author conveniently forgot to mention — 43 percent of the women who died at the workplace were murdered by a relative or romantic partner. So tell me, is really more dangerous to be a man?

Ultimately, the author uses poor logic and warped statistics to argue for the continued social oppression of women. The article, entitled "Equal Pay Day activists should admit there's a huge gender gap in workplace deaths," should really be called "But what about men??? :("

Apparently, women aren't even allowed to have one day to address the causes and effects of their institutional discrimination without men trying to co-opt the attention. That is directly detrimental to women's calls for equality, and anyone who holds any measure of support for this argument is actively perpetuating institutionalized misogyny.