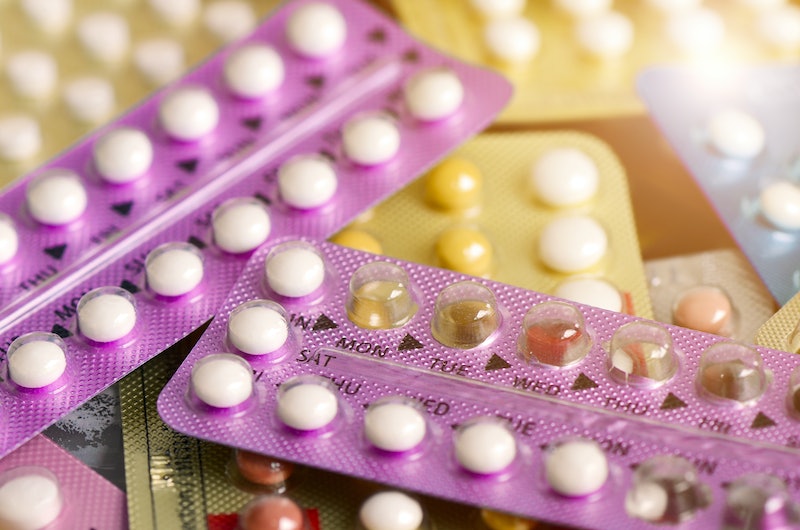 The UK's political situation isn't the only thing up in the air. The nation is also reportedly short of certain medications. One that is particularly concerning is the shortage of some contraceptive pills. According to The Sun, brands of both the combined and the progestogen-only (mini) pill have been affected.

The paper reports that pharmacies have faced difficulty fulfilling certain pill prescriptions and patients have had to find alternative contraceptives with the help of their GPs. (Dr. Daniel Atkinson, clinical lead at Treated.com, says that combined pills like Norimin, Loestrin, and Zoely are known to have been affected.) However, swapping to a different method is said to have left some women with unwanted side effects.

Manufacturing issues are being blamed and there is no end in sight for some of the shortages. "Some are expected to last well into 2020," notes Dr. Atkinson. Fears that Brexit could cause further medication shortages have previously been expressed by the Royal Pharmaceutical Society.

In response to the recent news, the Department of Health told The Sun: "We are aware there are supply issues affecting a small number of oral contraceptive pills due to manufacturing delays and we are working closely with the affected suppliers to resolve these problems as quickly as possible.

"Supplies of several other oral contraceptives are freely available and patients affected should discuss alternative options with their clinician or pharmacist as soon as possible."

According to Professor Helen Stokes-Lampard, chair of the Royal College of GPs, medication shortages do occur from time to time, but oral contraceptive shortages "have become significantly worse in recent months." In a statement sent to Bustle, she described the situation as "very concerning for both GPs and patients."

"Not only does this add to GP workload, as looking for suitable alternatives is very time consuming," she continued, "but it is also very inconvenient and can be distressing for patients if they can’t get the treatments they are used to, or they need to come back and forth to the GP if the drug they have subsequently been prescribed also turns out to be unavailable."

The impact on contraceptive pill users is greater than some can imagine. James O'Loan, consultant pharmacist at Doctor-4-U, says the risk of unwanted pregnancies could increase, especially when "some women aren't aware that their pill isn't available until they're told by their pharmacist, which can often be too late as they've finished their very last packs." Patients are then faced with the "inconvenience" of a back and forth to their doctors' surgery.

Then there's the issue of side effects. Back in May, pharmaceutical companies Bayer and Pfizer told the Department of Health and Social Care that supply of the Microgynon 30 and Ovranette pills would be delayed until July 2019 and August 2019, respectively. A letter from the department advised switching patients to an alternative pill. But pharmacist consultant Nuttan Tana warned the Pharmaceutical Journal of the side effects some women face "when they are changed over to what is recommended as a suitable alternative."

O'Loan reinforces this point. Switching pills can cause headaches, nausea, and breakthrough bleeding, he says, and side effects are more likely within the first three months of starting a new pill. This can be particularly problematic for people who have been on the same pill for years and have been used to going about their daily lives without disruption and discomfort.

It's uncertain when, or if, the out-of-stock oral contraceptives will be available again. For now, affected patients have no choice but to try a different pill or other contraceptive method. "There are a host of options available for women who want to take the pill," notes Dr. Atkinson, adding: "Some manufacturers have as many as four or five brands each."

But he explains they can work in slightly different ways: "Some are normal dose while others are low dose. Some are ‘multiphasic’, meaning that the pill packs have different levels of hormones at different points of the month, while others are ‘monophasic’ and just a continuous level dose. Some you take for the first 21 days of the month with a seven-day break, others for 24 days with a four-day break, and so on." This means that finding one that works for your body and lifestyle isn't always easy.

The main piece of advice from experts is to speak to a doctor before changing method and leave as little gap as possible between your old and new contraception. To avoid ovulation, "go straight from one type of pill to another," says O'Loan. If there has been time between the two types, you may not be protected, so ensure to use another method like condoms and to take the new pill for at least seven days.

Again, different pills have different rules. "If you’ve missed two or more of the combined pill, you won’t be fully protected and will need to use alternative contraception," O'Loan states. With the mini pill, you won't be protected against pregnancy if you're more than three hours or 12 hours late, depending on the type you're taking.

But there's little chance that all contraceptive pills will face supply problems, as, according to O'Loan, shortages "put pressure on other brands to deliver enough supply to accommodate the influx of new patients."

That doesn't help you in avoiding the inconvenience and risk in having to change your routine, but it does mean a doctor or pharmacist should be able to source a close alternative.