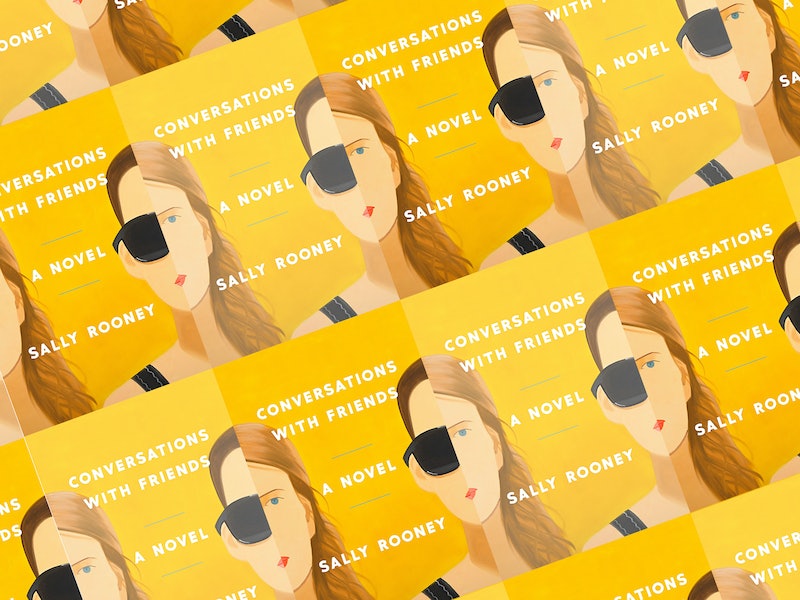 Bustle's I'm So Jealous series is dedicated to the books, TV shows, movies, podcasts, and more that super fans are so jealous someone else gets to experience for the first time. In this installment, Laura Winnick writes about Sally Rooney's Conversations With Friends, the first novel by the award-winning author.

One wintry week at the end of 2018, I shivered through Sally Rooney’s sexy Conversations with Friends alone in my bed. On Tinder, people seemed slightly more desperate; everyone was changing their bios and their photos, messaging in the hopes of securing a cuddling bedmate during "cuffing" season.

I hadn't had sex since August, when I slept with a close female friend in California after a long discussion where we both agreed to act on our long-simmering attraction for each other. Since then, I had been on an array of disappointing dates with cis-men I met on the Internet. I turned 30, and I started to really wonder what shape my romantic life would take in the years ahead. My queerness remained the same hibernating, dependable question it was when it initially appeared.

Conversations With Friends isn't about female friendship so much as it is about intimacy between women. The book centers on a relationship between two university students: the acutely self-critical, incisive protagonist Frances and her stunning best friend, Bobbi, who perform slam poetry together. They have, as the title indicates, conversations: Both the exhaustive, global kind about Big Questions, Feelings, Justice and the kind that mark the mundanities of the passing of our lives. They also, occasionally, have sex. In high school, they dated.

'Conversations with Friends' by Sally Rooney

I churned through the book rapidly. Conversations with Friends is a quietly queer story; it’s a novel about sexuality, womanhood, desire, but the novel does not depend on discourse. It feels no obligation to explain things by way of naming them. In fact, Frances’ sexuality is mentioned only once. "Frances is a bisexual,” Bobbi says about our protagonist, to which Frances responds, “Yes I’m kind of an omnivore.” In this narrative, Rooney doesn't abide by the constructs of sexuality, erasing society’s need to adamantly adhere to categories, and she doesn't narrow her characters to their shifting, sometimes contradictory desires.

Reading this book, I pined for the permission to pursue my desires without them pinning me to one end of the sexuality spectrum. Rooney’s characters had self-direction. They navigated their desires without having to claim their orientations first, which is perhaps a privilege inherent to their insular university world of the white, educated elite. On Tinder, I swiped and swiped, knowing immediately when I was attracted to a man but hesitating with the women. Occasionally, I swiped right. Occasionally, I mistook friendship for romantic potential.

The Guardian tells us, from a 2015 study by Dr. Jean Twenge that Millennials are having less sex, but Sally Rooney paints a portrait of millennial life that counters that. Sex is the only action that really furthers the plot of Conversations with Friends. Frances initiates an affair with Nick, a B-list actor, husband to Melissa, a well-known photographer and writer, who decides to profile Frances and Bobbi upon seeing them perform. Young and talented and recently broken up, Frances and Bobbi fascinate her; as soon as Melissa meets them, Bobbi confesses that Frances writes all of the poetry, and Bobbi merely performs it. In Dublin, the duos crisscross into one another’s lives, but Nick and Frances most frequently end up tangled together in bed. Their sex is urgent, and it strips Frances down to the animal inside.

In bed, Frances tells Nick of her relationship with Bobbi: "Well, she’s not my girlfriend as such. We’re sleeping together, but I think that’s a way of testing the limits of best friendship."

This line made me feel the singular, climactic sensation that characterizes the pinnacle of good reading: Rooney was speaking exclusively to me. She saw my attempt to physicalize female friendship; she knew it. Perhaps Frances and I were queer, perhaps omnivores. By Rooney’s rendering, we were just humans, pursuing our desires when they awakened inside of us.

If you’re picking up Conversations With Friends for the first time: Prepare for a 24-hour read-a-thon, to cancel your weekend plans, and to delete your Tinder account.

If you love it and want more of the same: Get ready for Rooney’s second book, Normal People, out this April in the United States, but already available in the UK via Amazon now.

And if this book converts you into a member of the Cult of Rooney: Well, you just might end up kissing your best friend.