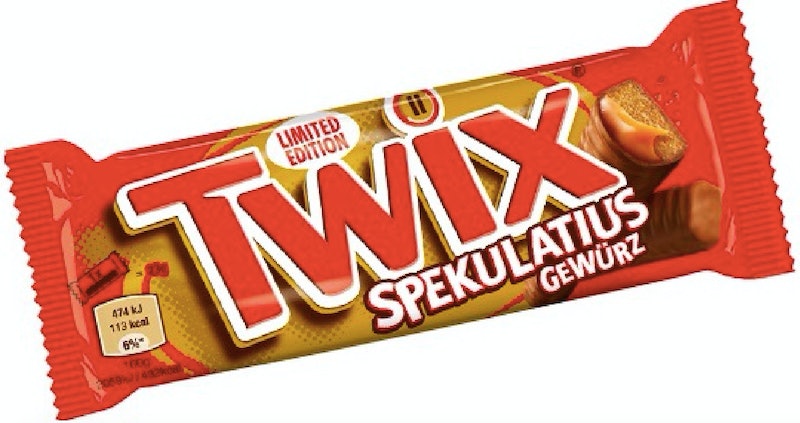 Summer's not even over, but Christmas 2018 is already on people's minds — and it just got a little bit sweeter. According to a press release from Mars in Germany, brand new New Speculoos Spice (Spekulatius Gewürz) Twix, or cookie butter Twix, will hit stores in Germany this winter in time for Christmas festivities — in fact, they'll be on shelves as early as October 8, according to Mars. "Patiently waits by eBay until they show up," says Instagram account Candy Hunting, who alerted people in the U.S. to its existence, in a post — and I am 100 percent in the same boat.

For those of you who don't know, Speculoos are spiced shortbread rectangular-shaped biscuits that are traditionally eaten around St. Nicholas' Day in the Netherlands and Belgium, and near Christmas in Germany. Fun fact: Speculoos are a common ingredient in Trader Joes' beloved cookie butter. So basically, the cookie itself has to be delicious.

Classic Twix bars already have a biscuit center underneath their chocolate and caramel coating, but that part of the candy bar doesn't really have a signature taste. Naturally, Germany thought to use Speculoos to spice up the original Twix bar and create a festive treat for the holidays. I can imagine it now: Speculoos Twix bars, an overflowing glass of eggnog, chestnuts roasting by the open fire, my negative bank balance after I buy two gifts. Ah, Christmas.

In Germany, winter holidays mean the arrival of a variety of classic treats. Among the traditional favorites are baked gingerbread treats (also known as lebkuchen), Christmas cookies, and the historically popular stollen, a flavorful, sweet cake filled with fruits and nuts. Mars Wrigley Confectionary's announcement that Speculoos Spice Twix bars would hit shelves in Germany in time for Christmas is just another example of how the country is winning when it comes to festive sweets. German online marketplace kaufDA reports that the limited edition Twix bars will be available beginning on October 8 and will be sold in packs of six. They add that the snack is already predicted to be a hit: according to a survey, 72 percent of people believed that Twix and Speculoos biscuits would pair well together. Who knew?

It's no secret that when classic brands release limited-edition varieties of their original products (and do it well), sales go up, customers are drawn in, and it gets people talking. In the competitive candy industry, this is a strategy that you're probably familiar with — take tropical Skittles or all the new Oreo variations that have gone on sale recently, for example. The Speculoos Spice flavor isn't the first twist on traditional Twix candy bars. In fact, there's quite a few unique Twix flavors out there that you may not have heard of: white chocolate Twix, which are becoming easier to find, limited edition Coconut Twix, a rare Christmas-themed Gingerbread bar announced by the brand in 2015, dark chocolate Twix (I have honestly never seen this in stores before), and even a Cappuccino-flavored rendition of the candy — which is also based in Germany.

If you've reached the end of this article, you're pretty much an expert when it comes to Twix candy bars. So, if you can get your hands on one of the harder-to-find versions of the treat, go full speed ahead — because why not? In the meantime, those looking for the cookie butter version will start wanting to check eBay on October 8.