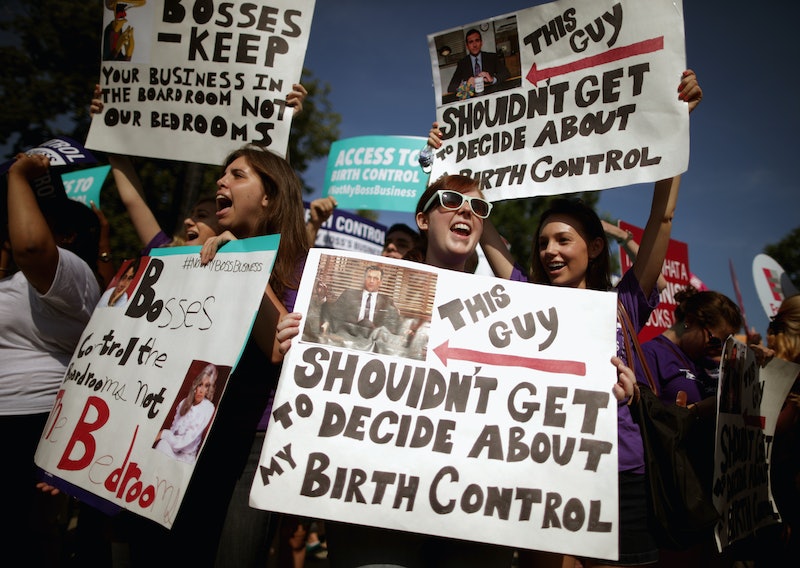 On Monday, the White House drafted a rule allowing corporations to deny covering employees' birth control under Obamacare. The move, critics say, will pave the way for religious organizations to impose their beliefs on female workers.

The drafting of the rule follows President Trump's executive order from earlier in May which protects "Free Speech and Religious Liberty." Many criticized the order as a veiled attempt to legalize discrimination against marginalized communities. During the signing, Trump accused the government for using powers of the state as a "weapon" against Americans of faith. "We will not allow people of faith to be targeted, bullied, or silenced anymore," he said.

The president's mandate is designed to undo the Johnson Amendment — a law which forbids 501(c)(3) tax-exempt institutions, including churches, universities, and charities, from campaigning for politicians — as well as an Obamacare mandate requiring all companies to provide free birth control for employees.

The order's signing in May was attended by representatives of several religious organizations, including the Little Sisters of the Poor, who took their fight against the Obamacare regulation on free birth control coverage to the Supreme Court in Burwell v. Hobby Lobby Stores. Though the group won their case in 2014, the dispute was far from over, and the following year, the federal courts ruled against the group's opposition to the requirement that religious organizations seeking to deny birth control coverage to members or employees apply for waivers. President Trump declared that with his order, the Sisters of the Poor had "sort of just won a lawsuit," and that their legal battles would "soon be over."

Opponents of the mandate pushed back by arguing that it did not honor the separation of church and state, and that for an executive order meant to encompass all religions, it prioritized largely Christian values by allowing organizations with religious affiliations to deny people services based on opposition to abortion, premarital sex, same-sex marriage, and trans identities.

Last Thursday, 14 Democratic senators sent a letter to Mick Mulvaney, director of the Office of Management and Budget, urging against the move to roll back birth control coverage:

Today, more than 55 million women are benefiting from coverage of preventive services with no out-of-pocket costs including birth control, thanks to the ACA. In fact, from 2012 to 2013, the number of women who filled their prescriptions for oral contraceptives with no co-pay nearly quadrupled from 1.3 million to 5.1 million. Women saved more than $1.4 billion in out-of-pocket costs for birth control in 2013 alone. Access to affordable preventive services including contraception is a critical part of women’s health care, as well as an economic priority for many women. It should be treated as such.

ACLU Executive Director Anthony D. Romero released a statement following President Trump's religious liberty executive order by deeming it nothing more than an "elaborate photo-op with no discernible policy outcome." Though he asserted that the order's sections on reproductive health services did "cue up a potential future battle," the organization would not yet take legal action as no changes to the status quo had been made. Whether that will change with the progress of the White House's proposed rule remains to be seen.

In response to Monday's news, Sen. Brian Schatz of Hawaii tweeted, "Millions of women marched across our country and I don't think they are going to stand for this." Let's prove him right.