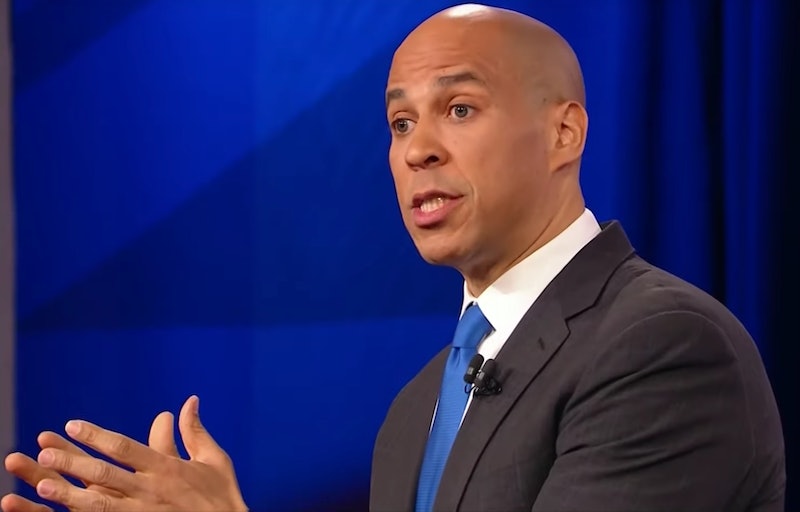 One of the best ways for Democratic presidential contenders to spread their message in these early days of the 2020 campaign is through a town hall. New Jersey's Sen. Cory Booker discussed gun control with CNN on Wednesday night, and showed why the issue is a particularly emotional one for him.

Booker was asked about gun violence by a mother of young children who said she's scared sending her kids to school since the rate of school shootings in the United States has surged in the last two decades. "What is your plan to ensure our safety and freedoms?" she asked the senator.

"This is very personal to so many of us," Booker told the audience. "Me, because I'm a black man, and black males are 6 percent of the nation's population. But they make up the majority of homicide victims in this country."

Booker also noted, "I think I'm the only person in this race that has had shootings on their block." He brought up the case of Shahad Smith, a 28-year-old black man who was killed on Booker's block in Newark a year ago. The senator knew Smith from living above him in a housing development from 1998 to 2006, and attended his funeral, according to NJ.com.

Booker said Wednesday that Smith was killed with an assault weapon. The senator previously joined other Democrats in introducing an assault weapons ban; the United States used to have such a ban on the books, but it expired in 2004.

"I am tired of going to funerals where parents are burying their children," he told the town hall audience. "My mayor is doing a great job in lowering crime, but there are shootings." Booker's block in Newark has experienced other gun violence recently, per NJ.com.

Although he didn't go into detail about his plans for gun control, Booker did mention that he wants universal background checks and to close gun law "loopholes" like the fact that terrorism suspects on the no-fly list are allowed to buy firearms. Some liberals are critical of using the watch list as a foundation for gun control legislation because reports have indicated that there's little transparency or accountability around who gets put on the list.

Booker blasted the National Rifle Association (NRA) and argued that it doesn't represent the interests of its gun-owning members, who generally support beefing up background checks. "If I'm your president," he said, "we're going to bring the fight to the NRA, who wants to represent corporate gun manufacturers more than they want to represent the people."

The senator also expressed irritation with the inaction around gun control in Congress. The House passed two major pieces of gun control legislation last month: One would require near-universal background checks, while the other would extend the amount of time a background check is allowed to take from three days to 10. The bills are unlikely to get anywhere while the GOP controls the Senate.

"I am frustrated with politicians who all the best they can muster is to give thoughts and prayers," Booker said Wednesday. "Enough of that. Enough of that."