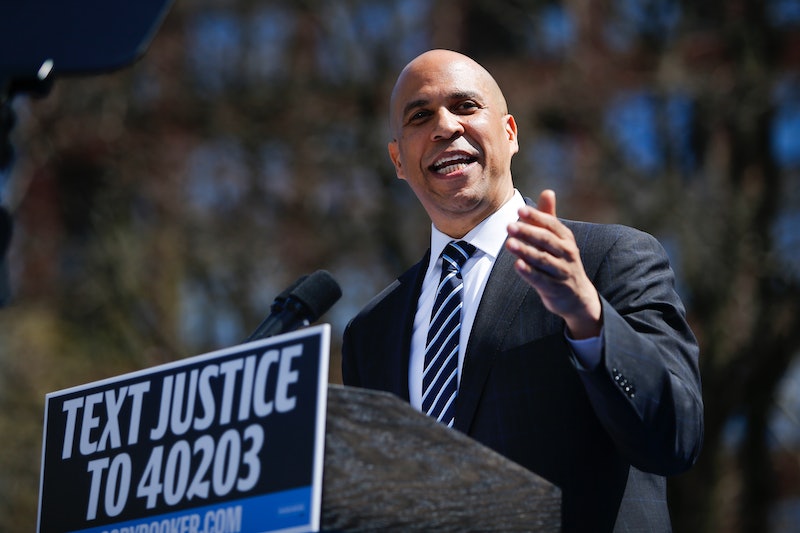 On Monday, one Democratic candidate released a proposal to combat gun violence in the United States. Sen. Cory Booker's gun control plan included a lot of the typical ideas that gun control advocates tend to support, but also took the standard a step further. In a Medium post where the senator detailed his proposal, he said that he would also institute a licensing requirement for owning and purchasing firearms.

"We won’t wait for more thoughts and prayers for communities that have been shattered by gun violence — from Pittsburgh to Parkland to Charleston to communities where kids fear the fireworks of Fourth of July because to them they sound like gunshots," Booker said in the post.

Likening gun ownership to driving a car, Booker proposed requiring prospective gun owners to apply for a license every five years. Applicants would have to submit their fingerprints, agree to a background check, and show that they have completed a "certified gun safety course," according to Booker's Medium post.

"This is a moment where we have a national crisis," Booker said in an interview with CNN. "In my short lifetime, more people have died from gun violence than all the wars in American history."

In speaking with CNN, Booker compared the effort to institute greater gun control to the civil rights movement. In his view, Booker explained, passing comprehensive gun control measures will require a similar amount of energy.

"Civil rights legislation failed time and time again and a lot of people were asking how," Booker said. "And a lot of people were saying that activists were asking for too much and demanding too much. But, we brought a fight to the civil rights movement like Congress had never seen and overwhelmed the racist rants of people like Strom Thurmond who were trying to block that legislation."

Booker's plan would also require handgun microstamping, a type of technology that allows law enforcement to link shell casings to the specific gun used in a crime or potential crime. Although one of the less-frequently discussed gun control proposals out there, Giffords Law Center reports that California passed legislation requiring handgun microstamping back in 2007 — the first state in the country to do so.

“Today what we’re seeing is people coming out muscularly for gun safety,” John Feinblatt, president of Everytown for Gun Safety, told The New York Times in a report about Booker's gun control proposal. “We’re early on in the 2020 cycle, and I think you’re going to see more and more of this.”

The 2020 Democratic presidential primary debates begin in less than two months, and it's likely that Booker's proposal will become fodder for those discussions. And given the way that the conversation surrounding gun control has progressed in recent years, gun control measures will almost certainly have a regular presence on the campaign trail.