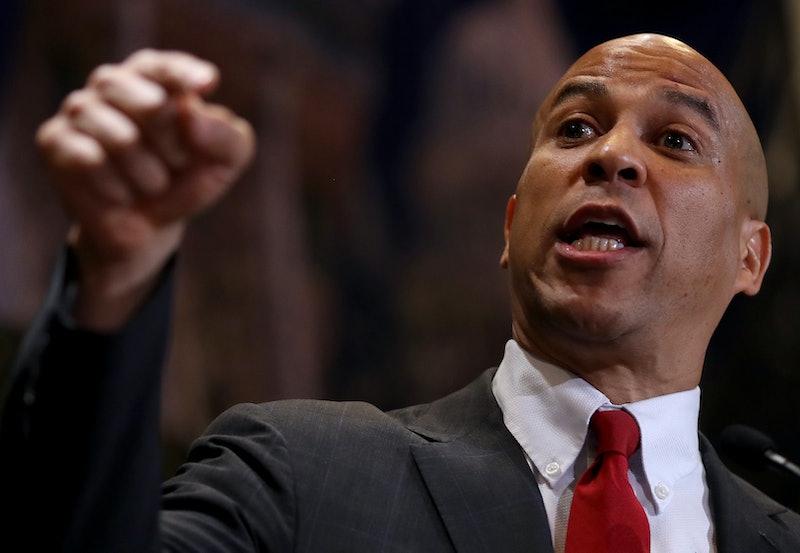 In the wake of abortion bans being passed in states with Republican-controlled legislatures, Democratic presidential candidates are defining their proposed policies on abortion rights and reproductive health. The latest is New Jersey Sen. Cory Booker, whose plan to advance reproductive rights was first shared on Medium Wednesday morning.

Booker proposes to take immediate actions through executive orders that include creating a White House Office of Reproductive Freedom, according to his proposal. He writes that due to the actions taken by the Trump administration, he will set up the group dedicated solely to "coordinating and affirmatively advancing abortion rights and access to reproductive health care" across his administration, should he be elected .

Booker wrote in the piece that the office will also address "barriers to full reproductive autonomy" including access to health care, maternal and infant health, affordable child care, and paid family leave. This would include rolling back Trump's rule that allows doctors to refuse to perform abortion procedures on religious grounds.

"Republican-controlled state legislatures across the country are mounting a coordinated attack on abortion access and reproductive rights," Booker said in a statement on the new plan, obtained by The Daily Beast. "A coordinated attack requires a coordinated response. That’s why on day one of my presidency, I will immediately and decisively take executive action to respond to these relentless efforts to erode Americans’ rights to control their own bodies."

Booker had already promised some concrete actions on abortion rights before the Medium piece, including a promise told to BuzzFeed News to only nominate justices to the Supreme Court that would uphold Roe v. Wade, a pledge made by New York Sen. Kirsten Gillibrand in early May. He also told BuzzFeed News that he would work to codify the right to abortion so that state laws limiting the procedure would be made invalid, Sen. Elizabeth Warren has similarly proposed.

Other actions he outlined in the Medium text include ending both the domestic and global gag rule, guaranteeing access to contraceptive care covered by employers, and repealing the Hyde Amendment in his first budget — that's the law that prevents federal funds from paying for abortions.

In addition to his latest proposal, Booker wrote an open letter to men on abortion rights. Published in GQ, the letter details Booker's views on the matter, but also what he sees as men's necessary role in protecting the right to reproductive freedom.

"Men, it’s on us to listen, to speak out, and to take action. Not because women are our mothers, sisters, wives or friends—but because women are people. And all people deserve to control their own bodies," Booker wrote in the piece.

He went on to say that the "far-right attacks on women’s rights" ought to be interpreted as an "attack on all of our rights" — even though they target specific populations in the country. He detailed how women of color, poor women, and women living in rural areas are affected to a higher degree by the newly passed bans.

In the statement addressing the new announcements Wednesday, Booker said that his goal isn't just to "undo the damage" from the bans and the Trump administration "but to affirmatively advance reproductive rights and expand access to reproductive care for all."

But first, he'll have to sell his policy over other Democrats' and take home the nomination.