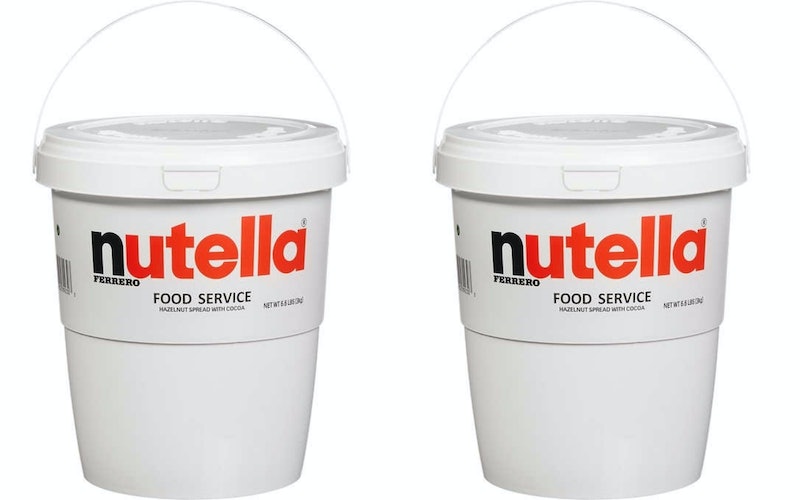 Nutella lovers, Costco has just the thing for you. As reported by Delish, Costco is selling a 6.6 pound Nutella container that is so big it comes as a pail with a handle. It might be marked "Food Service", but Costco has made it so anyone can own an amount of Nutella that would normally be reserved for a crêpe shop.

The six-and-a-half pound container of Nutella cost $21.99 — a steal! — and can be ordered online. As Delish points out, this size Nutella is more than three times the amount of the next biggest size Costco offers, which is a 33.5 oz. jar. For reference, a "normal" sized Nutella is 13 oz.

The Nutella tub could be a great gift for someone who really loves the hazelnut spread, since it's just so ridiculous. I know I wouldn't mind being given a "Food Service" container of Nutella. Unless I wasn't at home when I received it, because who wants to lug that around.

Costco isn't the only place where 6.6 pounds of Nutella can be purchased, but it is one of the cheapest. Webstaurant Store has it for the same price, Mercato has it listed for $59.95, Cerini Coffee & Gifts sells it for $45, and Blair Candy says that it did have it listed for $15, but that it is currently out of stock.

Whether you're interested in the giant Nutella or are just a Nutella fan wondering for what else is out there in the chocolate hazelnut spread world, look no further.

Here it is in all its industrial-looking glory. Might I suggest using it to host a Nutella-inspired crêpe brunch. Because you might think you can get through 6.6 pounds of Nutella alone before it goes bad, but I'm not so sure.

For those who want to be a bit more restrained, Costco also offers a two-pack of 33.5 oz jars.

Thirty Nutella recipes in a book shaped like a Nutella jar that costs less than most jars of Nutella. This would also make a great gift and a very cheap one.

This T-shirt featuring a cartoon drawing of a Nutella jar comes in three different colors (white, black, and gray) and is a nice way for a Nutella fan to express their love of the food, if not as tasty as actual Nutella.

You probably shouldn't start your day with a mug of Nutella, but you can start it with a Nutella mug. And if you get that big container of Nutella, you can pair your Nutella mug and Nutella and toast for weeks on end.

A big pail of Nutella isn't going to be for everyone, but if you love the spread, catching a glimpse of the thing will probably make you happy every time you see it.