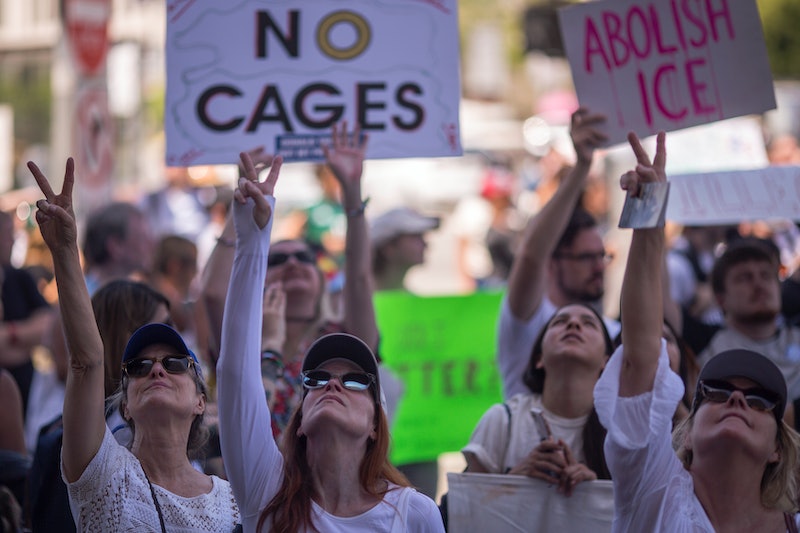 Following the implementation of the Trump administration's zero tolerance immigration policy back in April, some have called for the abolition of the U.S. Immigration and Customs Enforcement agency, otherwise known as ICE. While disbanding the agency is an increasingly popular sentiment shared among some immigration activists, you may be wondering whether ICE actually could get abolished. A Democratic lawmaker is writing a bill to dismantle the agency. The forthcoming bill's exact contents — and chances of passing — are not yet known, though its focus will be on developing a more "humane" alternative to ICE.

Last week, Congressman Mark Pocan, a Democrat from Wisconsin, took a trip to the southern U.S. border to observe immigration enforcement activities in the area. Following his trip, Pocan announced via a statement on his website that he would be introducing legislation to abolish the agency. As the Congressman stated:

During my trip to the southern border, it was clear that ICE, and its actions of hunting down and tearing apart families, has wreaked havoc on far too many people ICE is ... ripping at the moral fabric of our nation ... I’m introducing legislation that would abolish ICE and crack down on the agency’s blanket directive to target and round up individuals and families. The heartless actions of this abused agency do not represent the values of our nation and the U.S. must develop a more humane immigration system, one that treats every person with dignity and respect ...

Pocan also indicated on his website that his forthcoming legislation will include both the abolition of ICE and the creation of a commission to provide recommendations on how the U.S. government can develop a more "humane immigration enforcement system."

The congressman from Wisconsin expounded on his legislation during an interview with NBC News on June 30. Pocan noted that the Trump administration's actions, particularly the family separations that stemmed from the administration's zero tolerance immigration policy, drove him to start developing a bill related to ICE. As Pocan told NBC:

President Trump has been an evolution for many of us in how far he will go and, I would argue, his actions that damage the country, and at what points you have to stop them ... Then when the president said this weekend we can get rid of due process — he’s already abusing ICE’s functions as a personal political police force for his own reasons, and then when you add getting rid of due process, this is not what America’s about. That was really the catalyst ...

Pocan also noted that the aforementioned commission would constitute a key part of his immigration legislation. As Pocan described, there are many federal agencies that can and do engage in work that is similar to that of ICE. He told NBC that the job of the commission would be to "lay out the duties that need to continue that ICE does that are appropriate and proper and then take away the ones that the president has maybe abused that maybe no longer need to exist." The duties that the commission decides should continue would then be assigned to an appropriate federal agency, once approved by Congress.

The Congressman also indicated that he thinks ICE needs to be abolished because he believes it has moved away from its original purpose of countering terrorism post-9/11. As Pocan described to NBC:

The whole idea is that it [ICE] was created after 9/11 with the terrorist actions that affected this country in mind. If you take them away from that focus because they're busy finding that person who got a speeding ticket in Kansas at a meatpacking facility, you’re not going after someone who could be a threat to a large number of Americans.

Pocan told NBC News that the wording of the bill is not yet final. However, it is expected that the Congressman will soon be introducing the legislation. Time will tell just how much support Pocan has for the forthcoming bill — and whether other members of Congress will similarly call for an end to the controversial federal agency.